This page is written by the game's inventor, Jose Carrillo. This game is a favorite of its inventor.

Petteia (Poleis, Cities or the Game of Pebbles) was an ancient attrition warfare game played in Ancient Greece.

The Greek territories during the Archaic period (c. 8th century BC), and a vase depicting Ajax and Achilles playing Petteia during the Trojan War. 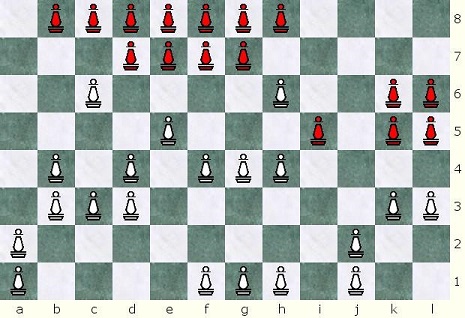 White's attrition attack has isolated the Black-eastern forces. Any attempt by Black to save those soldiers will continue to wear down the Black-army. White's attrition warfare has brought Black to the point of collapse through continuous losses in material.

Petteia is played with black and white stones initially lined up on opposite sides of the board. The main attacking tactic is to capture enemy stones by surrounding them between two friendly soldiers.

This colorful description of what is believed to be the Roman game of Latrunculi, also describes (in a beautiful way) what a Greek Petteia struggle feels like:

Cunningly the pieces are disposed on the open board and battles are fought with soldiery of glass, so that now White blocks Black, now Black blocks White. But every foe yields to thee, Piso; marshalled by thee, what piece ever gave way? What piece on the brink of death dealt not death to his enemy? Thousand-fold are thy battle tactics: one man in fleeing from an attack himself overpowers him, another, who has been standing on the look-out, comes up from a distant corner; another stoutly rushes into the mÃªlÃ©e and cheats his foe now creeping on his prey; another courts blockade on either flank and under feint of being blocked, himself blocks two men; another's objective is more ambitious, that he may quickly break through the massed phalanx, swoop into the lines and, razing the enemy's rampart, do havoc in the walled stronghold. Meantime, although the fight rages fiercely, the hostile ranks are split, yet thou thyself are victorious with serried lines unbroken or despoiled maybe of one or two men and both thy hands rattle with the prisoned throng.

The fragment of text above comes from a poem in Latin known as Laus Pisonis which was written by Saleius Bassus during the middle of the 1st century A. D.

Latrunculi (Ludus latrunculorum or the Game of Little Soldiers), the ancient strategy game played throughout the Roman Empire, is believed to be similar or a variant of the Greek game of Petteia.

Latrunculi and Petteia can be thought of as the Chess and Draughts games of the Roman Empire and of Ancient Greece.

Single Stone Latrunculi is a simpler (training) variation which is played like Latrunculi (but without Duxes) or as Petteia (with only one row of soldiers).


Petteia XXI is one of two ancient abstract strategy games that I reengineered in 2015 to introduce my son Joseph to the world of variants. My other variant, Latrunculi XXI, is played with the same rules as Petteia XXI, except that the former game introduces the concept of Duxes (Kings), which need to be immobilized or checkmated to end the game.


Diagram 3 - My son Joseph and I playing Petteia XXI. On the left by using Japanese Go stones to represent the soldiers, on an 8x10 board for a cards game called Criblets. On the right, we are using an 8x12 Petteia set from nestorgames.

My objective when I created Petteia XXI and Latrunculi XXI was to make a set of rules and tactics for the ancient Greek and Roman games, which would allow a modern 'XXI' (a.k.a. 21st) century player to force a win on his/her opponent, therefore minimizing the number of draws, without relying on any serious mistakes in play by one side or the other.

At first the rules of Petteia XXI may seem long and complicated, but as you will quickly find out, the game is actually quite easy to play.

Learning to move the pieces is the easy part. Mastering the strategy and tactics needed to annihilate his/her opponent, is the real challenge of this variation of the ancient Greek game.

Petteia XXI is not only a good alternative game for Draughts-variant lovers; but also a great training tool for Latrunculi XXI players, to get experience with the moves and tactics of the soldiers or pawns.

Regardless of the size of the board, the Petteia opening setup looks like a 2-row Testudo rectangular formation (see definition 3 later on below) with soldiers in each of the players' first two ranks, as follows: 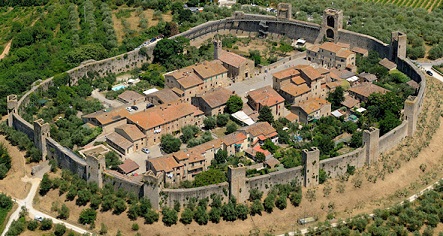 When you play Petteia, picture yourself battling with your opponent inside a medieval walled city, like the one above. This one is Monteriggioni in the province of Siena in Italy.

However, unlike in Chess or Checkers, captures in Petteia are done by custodial attacks, similar to how it's done in other games like: Hasami Shogi, by the pawns in Robert Abbott's Ultima or Roberto Lavieri's Maxima; a type of capture common to other games like Seega (Egypt) and the Scandinavian family of Tafl games.

A 2nd piece must move in to attack, by surrounding either horizontally or vertically, an enemy soldier (already in attack) to perform a capture.

After white plays: d1-d5xc5 and black plays: ... e6-i6xi7 (right diagram), the c5 and i7 soldiers are captured and removed from the board.


However it is possible for a piece to move in between two men, without risking an immediate capture (or suicide) of the moving piece. Capturing is only possible in an attacking move.

This time the soldiers at c4 and i6 are perfectly safe. The black soldier at c4 is said to be sandwiched-in, but this time (for the time being) is actually well positioned and has a relative fork on white's b4 and d4 soldiers, as with black's next move a8-a4 or e8-e4 (orange arrows), one of the two white soldiers will fall.

A situation that can occur in Petteia happens when a piece moves in such a way that more than one enemy soldier is captured. Look at the example below:


Diagram 7 - Sample Dual Capture, as a the consequence of a double custodial attack

The soldier at h5 moves to c5 and surrounds both of black's b5 and c4 soldiers (which are both locked in one-to-one skirmishes, and performs two custodial-captures at once. The notation for this move is: h5-c5xb5xc4

Since Petteia uses custodial captures (capture by surrounding) as the principal offensive tactic to capture enemy soldiers, it always takes at least two soldiers to perform a capture.

Below are the classical rules for Petteia:

The example above shows the two soldiers (at d1 and g4) that can move to d4, surround and capture the enemy soldier at c4, who is already locked (i.e. unable to move, see rule 10 below) in a skirmish with the b4 soldier.

A special type of custodial capture is shown at the top corner of the board. The black j8 soldier is already in a one-to-one skirmish with the white i8 soldier. The white j5 soldier can play to j7 to surround the black soldier in the corner against the walls of the city, and to capture him.

In addition to the nine classical rules above, in Petteia XXI there is 50-move draw rule and the Threefold Repetition rule gives a loss for the player forcing the 3rd repetition.

Draws are discouraged in Petteia XXI. However, players can agree to a draw if they believe that the position merits that outcome. If the game goes for 50 moves without a capture, the game is automatically a draw.


The classical Petteia rules provide the basics for the ancient Greek game. However, without a few additional new rules, a game played between two strong players will end up in a draw; as the rules above do not provide enough tactics for players to force a win on his/her opponent, unless one of the players made several serious errors in their play. A game that can at best end in a draw (if well played) would be a boring game.

Since Soldiers move like rooks, special rules exist in Petteia XXI to limit mobility or to allow special captures, otherwise games played with the classical rules could turn into drawish back and forth move affairs, where players try to maintain their soldiers on the diagonals, so as to avoid damaging their position. Look at this example:

With the reconstructed classical Petteia rules, by keeping their soldiers in the diagonals, players can continue to move back and forth to protect their position, and the game would result in nothing but a lengthy and boring draw.

In the position on the left, Black has only one soldier left and is no longer able to perform any captures, therefore the game is over.

In the position on the right, Black does not have any legal moves, therefore he is stalemated and lost the game. Black's three soldiers are engaged in individual combats (circled in red), and in Petteia XXI they are not allowed to escape or abandon their current combat post (see rule 10 below). The Black pawns are "locked" and unable to move, just like pawns in chess can be "blocked" by enemy pawns.


What follows now is my special set of additional rules that make Petteia XXI into a very playable game that does not depend on anyone making serious errors in play, and yet they give the game the spirit of a battle.

Now look at the following position:

This is occurs often in the classical game, as could happen as well as in Petteia XXI (even with the 3 new rules and tactics above).

In order to not to affect their positions, both players could move their free pawns at c7 and g1 almost indefinitely, and with so many squares available to each of the soldiers, it would take a long time before the game ended by means of either the Threefold Repetition or 50-move draw rules.

Positions like the above one inspired a new set of tactics called Linear Attacks. These new attacks allow the captures to be achieved by special maneuvers which can capture enemy soldiers in the same direction of the attack.

Players are encouraged to make sure all the rules are followed and that any illegal moves are immediately taken back.

Given that all soldiers move the same way, long algrebraic notation is used to record the moves in Petteia XXI; because it may become confusing from where a soldier may have come from, to a particular square when recording a game; as potentially multiple soldiers can play to the same squares. Like for Pawns in Chess, Soldier moves do not need to have the initial (S) preceding the move.

Therefore the notation for each move is: [from square]-[to square](x captured piece square)

This game is basically Petteia with one row of soldiers (instead of two); but it's also the same as Latrunculi XXI without any Duxes.

It is meant to be a training tool to the basics of soldier movement in Latrunculi XXI, without the added tactical complexity of having a second row of soldiers as in Petteia.

The objective of the game (just like in Petteia XXI) is to annihilate the opponent's army, or to win by stalemating the opponent.

Latrunculi XXI and Petteia XXI were created by Jose Manuel Carrillo-Muniz, from Puerto Rico in 2015.