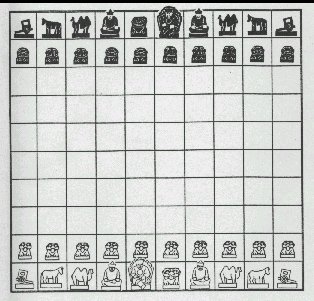 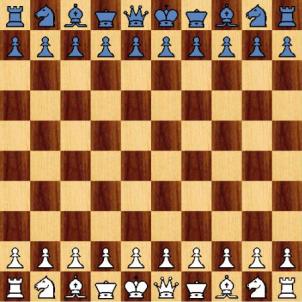 Hiashatar first appeared in Mongolia about 500 years ago. According to a legend:

Long long ago lived a Khan who was forced to fight many wars. It helped him to understand that even the most intensive training was not enough for victory. Therefore he included into his army the authorized representatives responsible for his safety. Other rulers found this innovation to be helpful too, and adopted the same. Then a certain wise man under the influence of these innovations transformed the game of Shatar, by inserting into it bodyguards - the new pieces responsible for the safety of King. 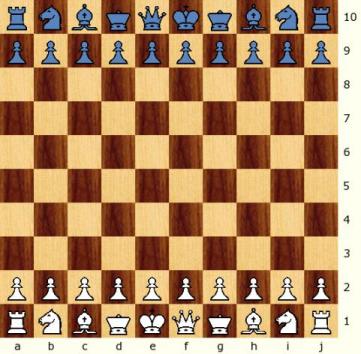 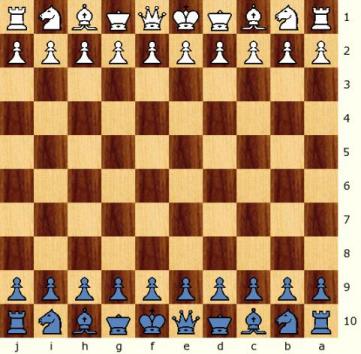 The Queen (Berse) always starts to the right of the King (Noin).

The Hiashatar opening setup is as follows:

Additionally Bodyguards have a unique feature, they have a special zone of influence (the 8 squares one-step away around the Bodyguards perimeter) which breaks or stops the path of each one of the enemy long distance sliders: Queen, Rooks and Bishops, at the zone of influence.

As a consequence, Bodyguards cannot be captured from far away by the long distance sliders, and may only be captured in close range (only one-step away) by the sliders.

Bodyguards do not check (and therefore cannot checkmate) enemy Kings. As a consecuence, Kings can approach enemy Bodyguards without any concern of being captured. 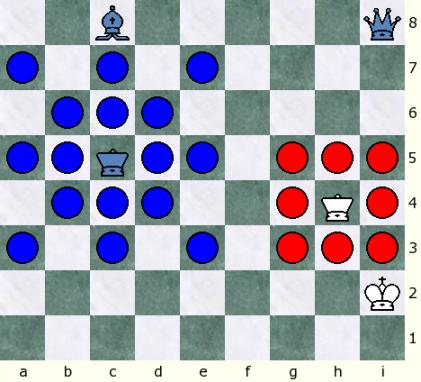 The Hia on c5 shows (blue circles) the normal attacking movement of the piece: a 1 or 2 squares slider in any orthogonal or diagonal direction. The Hia cannot leap over the first square (i.e. like an Ajax Minister) to reach his second square. The path must be clear for the Hia to reach his 2nd square. He can capture on either his 1st or 2nd squares.

The Hia on h4 shows (red circles) his 1-square perimeter defending zone of influence, which truncates the path of any enemy slider trying to cross it. Friendly sliders (same color as the Hia) are un-impacted by the Hia's zone of influence, and can therefore cross it freely.

In the example above it would appear that Black's Bishop and Queen are both checking the White King; but this is not the case as the h4-Hia's zone of influence is tuncating the path for both Black pieces.

In the case of the Bishop, he can slide as far as g4, the first square inside of the Hia's zone of influence in the Bishop's path. Within the zone of influence (provided the Hia doesn't capture him) the Bishops only other moves on his next turn would be Bh3+ (check!) and Bh5.

After Bg4, the Bishop would be within striking distance of the Hia, except that the Hia is actually "pinned" by the Queen on i8.

Similarily, should Black play Qi5 (her limit in the Hia's zone of influence), the Hia cannot capture the Black Queen as the zone of influece would move with the Hia exposing the King to a check by the Bishop.

Because of the inability of penetrating the Hia's zone of influence, it takes sliders (Queens, Bishops, Rooks and opposite Hias) at least 2 steps to capture a Hia.

Meanwhile, Knights (who are not sliders, but leapers) are unaffected by a Hia's zone of influence, and can therefore leap and capture the Bodyguards.

Hia's are defensive pieces whose goal is the personal protection of their Kings, therefore they should not (even though they are allowed to) wonder too far from their King.

The Hia are unable to check (or checkmate) the enemy King. Therefore a King can aproach a Hia without any concerns of an attack from the latter.

Any piece (other than the Hia) can check and checkmate. Unlike in Shatar, Knights are allowed to checkmate in Hiashatar.

A stalemate is a draw.

Just like in Shatar, castling is not allowed in Hiashatar.

Rules for 50-move draw and Threefold Repetition Draw are like in Orthodox Chess.

Pawns may be captured en passant either on their 2-step or 3-step squares initial moves.

Zillions of Games installed on your computer, you can play this game. Download Zillions Rules File here.

Hia Chess The Hia featured in a 9x8 board, with some additional modern chess rules...