This variant is based on my idea of the Thief as a Forward-only (FO) Alibaba and the ensuing discussion on the page for that piece. My first thought was to have a King and Alibaba aside and 40 Thieves in total (20 aside). My piece article Man and Beast 06: The Heavy Brigade, extrapolates the idea of these pieces to other geometries and Man and Beast 11: Long-Nosed Generals those of the promoted Thieves.

There also had to be standard pieces for the Alibaba and Thieves to rob by jumping over them. The FIDE simple pieces increased army size to 28, so throwing in a pair of the Knight's colourbound dual the Camel as well nicely filled the back 3 ranks of a 10x10 board - symmetric pieces on the back rank and Thieves on the next 2.

With relatively few symmetric pieces, the game would get ever less interesting as they got captured, so I decided to use Shogi-style reintroduction to give a constant renewal of these pieces. The Shogi idea also influenced promotion rules, and I therefore developed the variant around two Shogi sets minus the Kings of one - an idea further developed in my Shogi-set Nearlydouble Variants. As with Shogi and my own Bishogi, Wildebishogi, and Mitregi the pieces return unpromoted. The choice of name is influenced by its back rank being Wildebishogi's plus the Alibaba. 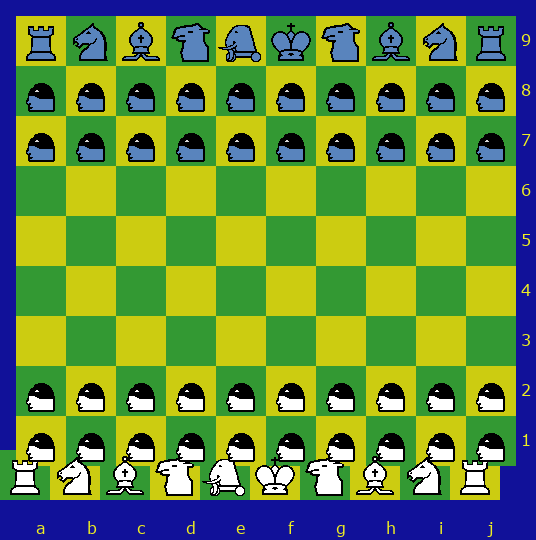 There are three Reserves: an initially empty one for each player, and a neutral one (NR) initially containing six Alibabas, four Knights, four Camels, and four Thieves. This last is a way of using the spare physical pieces.

The three piece types common to FIDE Chess and Shogi appear in Alibishogi, as in Bishogi, in their FIDE proportions. This leaves either none spare for the NR, or none usable to avoid multi-King complications. Array pieces not found in standard Shogi must be physically represented by pieces that in Shogi itself move differently, There are at least four each of these left over for the NR. Promotees are represented by the promoted form of the representation of the unpromoted piece. As Shogi symbols vary for promotees moving as Goldgenerals (perhaps to tell players what they will get by capturing!) they can have different moves in this variant.

As Thieves always have a double-step move anyway, there is no dispensation to extend this further for their first move. As they have no single-step move there is no En Passant either. Castling involves the King moving to a Bishop square and the same-side Rook to the Camel square, with the usual FIDE restrictions.

Alibabas, Thieves, Goldthieves, and Silverthieves may leap over intervening pieces, robbing that piece if it is an enemy back-rank piece. This involves the pieces becoming the unpromoted form of each other, and is physically represented by swapping the pieces and turning each through either a yaw of 180Âº if already unpromoted, or a pitch of 180Âº if promoted.

If the Mao and Moa pass-through squares are occupied when a Knight leaps, one by an unpromoted ally and one by a promoted enemy (in either order), the pieces swap promotional status. The moving Knight is unaffected, unless of course it reaches the end rank in the process! Camels can do the same for the Boyscout pass-through squares of their respective colourbindings. Gnus inherit the abilities of both components.

Captured pieces go to the capturing player's Reserve. Leapers can capture at their destination, affect intervening pieces, both, or neither depending which squares are occupied. Players can place a piece from their own Reserve, in unpromoted form, on an empty square in place of a normal move, not affecting the move of any piece already on the board. The only limit on which empty square can be used is that a piece must not be placed on or beyond its promotion rank.

A Thief is promoted to Silverthief on reaching its player's eighth rank, or to Goldthief on reaching the ninth. Back-rank pieces are promoted on reaching the far rank. This Silver/Gold/King progression (linepieces effectively gain the King's move though without its royal restriction) can be seen as echoing the generals of the original Shogi. A newly promoted Thief collects a piece from the enemy Reserve if there is one (an incentive not to hoard pieces in Reserve), or if that is empty a piece from the NR. If both Reserves are empty it can pick one up later by moving within, or returning to, its promotion rank. This piece is placed under the promotee and carried by it, without access to its own move. If the promotee leaps an intervening piece of either army, or is demoted by being leaped itself, or is captured, the carried piece goes into the NR. If it remains promoted it can carry again as soon as it reaches its promotion rank again.

A promotee returning to camp still carrying goes into the player's own Reserve leaving the carried piece at the destination square in unpromoted form. The carried piece can then finally move in its own right.

Check, Checkmate, and Stalemate are standard. In addition a player wins if they have at least 1 Alibaba and 40 promoted or unpromoted Thieves at the end of the enemy's move.

Radial leapers are weak in terms of their move, but have some useful additional abilities in helping players gain stronger pieces. Players should however take care when robbing backwards, or with an Alibaba in any direction, as the robbed piece may be able to reverse this robbery with its own move. A robbery giving the enemy the requisite Alibaba and 40 Thieves should be avoided if possible, as this is suicide.

A variant featuring a version of robbing by FIDE pieces themselves is my variant Pink Panther Chess, inspired by the series of films (and especially the first) starring Peter Sellers. My later variant 2 Jewels combines both.