This is one of our Featured Games. Click the link to check out our others.

Shogi is the Japanese cousin of Chess. Very similar to it in some respects, it differs from Chess mainly by allowing players to keep captured pieces and replay them as their own. Although it shares with Chess the same object, the same general rules, and some of the same pieces, this one difference makes the experience of playing Shogi quite different from the experience of playing Chess. It allows players who are behind to more easily get ahead, and it can keep the outcome of the game more uncertain until the very end. Compare this to Chess, where the difference of a single Pawn can decide the outcome of the game between equally skilled players. This difference from Chess helps keep the game interesting and exciting until the end.

The similarites between Chess and Shogi suggest a common origin, and it is commonly held that their common origin was a game called Chaturanga, which arose in India in approximately the 7th century AD. From there Chaturanga migrated westward, eastward and northward, mutating along the way. The westward migration led to Shatranj in Arabia and Orthodox Chess in Europe. The eastward migration likely crossed the Bay of Bengal to Southeast Asia, leading to Makruk in Siam (Thailand) and Sittuyin in Burma (Myanmar). The northward migration spread to China, where it became Xiangqi, and turned east to Korea, where it became Janggi. Shogi shows signs of influence from the regional variants in both southeast Asia and east Asia, and its origin may be syncretic. Notably, Japan was home to many variants, and one that was originally called 'Small Shogi' eventually won out over the larger variants and became known simply as 'Shogi'. It is certain that Shogi in its present form was played in Japan as early as the 16th century.

(-gi) Shô means general and Gi means board game. Shogi, which rhymes with yogi, means general's game. The name for

How to Play Shogi

In some respects, Shogi is very similar to western Chess. It's a two-player game in which each side takes turns moving one piece at a time with the object of checkmating the opponent's King. It differs from Chess in its board, in the initial setup of the pieces, in the pieces used, and in some rules, particularly those concerning piece promotion, the capturing of pieces, and the dropping of captured pieces. These will all be covered in the subsections below:

The Initial Setup of Shogi

Shogi is played on a 9x9 board. Each player begins with one King, one Rook, one Bishop, two Gold Generals, two Silver Generals, two Knights, two Lances and nine Pawns. As shown on the left, Shogi is traditionally played on an uncheckered board, and four black dots delineate the promotion zones (those squares lying on the last three ranks). Traditional Shogi pieces have the piece names written on them in Kanji (Japanese writing using Chinese characters), and because pieces may change sides, the side a piece belongs to is determined by orientation, not by color. As shown on the right, Shogi may be played on a checkered board with pieces that use pictures instead of Kanji. The setup shown on the right is designed to better show the similarities between Shogi and Chess. Even using these more western pieces, Shogi is best played with wedge-shaped pieces whose orientation determines which side they belong to. Trying to play Shogi with figurine pieces would be impractical.

Shogi begins in the position shown below in either of the two diagrams. From left to right, each player's first rank has a Lance, a Knight, a Silver General, a Gold General, a King, a Gold General, a Silver General, a Knight, and a Lance. In the second rank, each player has a Bishop in front of the left Knight and a Rook in front of the right Knight. Since the game has rotational symmetry, the Bishops begin in opposite corners, and the Rooks begin in opposite corners. Each player's third rank is filled by Pawns. 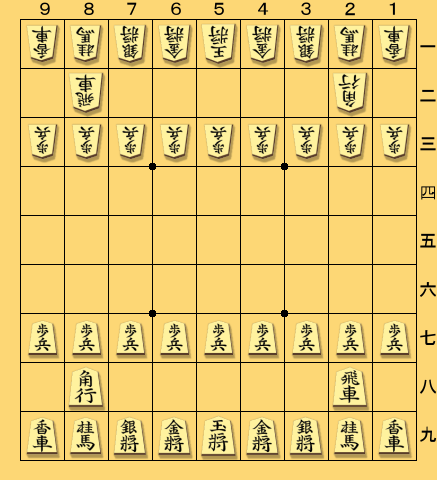 Traditional board, pieces, and notation 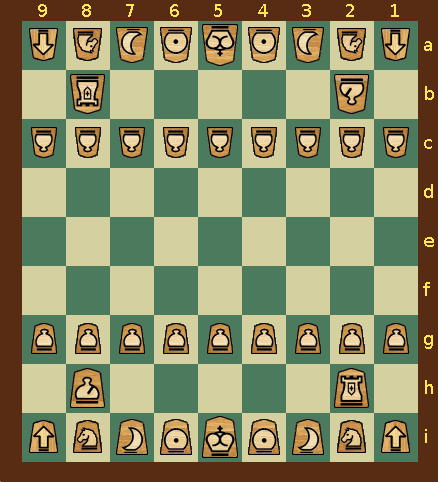 The Pieces in Shogi

Shogi is normally played with wedge-shaped pentagonal pieces made of wood or plastic. With a couple exceptions, each physical piece represents a starting piece on one side, and it represents a promoted piece on its other side. This makes the promotion or demotion of a piece as easy as flipping it over. A piece may promote when it moves to, from, or within the three ranks on the opponent's side. Promotion is optional except when the move would otherwise leave the piece without any further legal moves.

Promoted pieces are sometimes colored red, but this practice is not universal. Pieces may be represented by their full Kanji names, as half Kanji, which uses only one character for each piece, with pictures, with letters, or with movement diagrams. Pieces with movement diagrams are helpful only for beginners, and they are inessential with computer programs that will show you where pieces can move, as some do. Once you know how the pieces move, it becomes more important to be able to quickly recognize the pieces, and that can be made more difficult with movement diagram pieces, which use similar designs for all the pieces. Kanji pieces are more easily recognized than diagrammatic pieces, and the best alternative to Kanji for westerners would be pieces with familiar, easily recognizable pictures.

As the pieces are described below, they will be illustrated in full Kanji, in half Kanji, and in the Chess Motif style. To better help you recognize the pieces during play, descriptions of piece movement are followed by notes on the Kanji characters and the symbols used by the Chess Motif set besides Chess piece images. Individual characters and symbols are linked to external pages with further details about them. Individual piece names are linked to Piececlopedia pages with further details and movement diagrams.

The Rules of Shogi

When each player has moved his King to his promotion zone on the other side of the board, it can become difficult for either player to checkmate the other. Because many pieces have forward-only moves or are stronger moving forward, it becomes more difficult for them to check a King that has moved to its player's promotion zone. Additionally, it becomes much easier to surround one's King with promoted pieces, which makes it more immune to attack. When each Kings has moved to the opposite end of the board, and it has become too difficult to checkmate either King, this is called an impasse.

If both players agree that the game has reached an impasse, the outcome of the game can be determined by counting pieces. According to John Fairbairn in *Shogi for Beginners*, players count the Kings as nothing, the Rook and Bishops (whether promoted or not) as five points each, and all other pieces as one point each. If a player has at least 24 points, he cannot lose. If both players have at least 24 points, the game is a draw, or the players play again. Otherwise, the player with less than 24 points loses, and the other player wins.

However, if one player does not agree that an impasse has been reached, the game may continue. If checkmate still doesn't happen, a player may demonstrate the existence of an impasse by moving all of his pieces into his promotion zone. At that point, pieces should be counted up to determine the winner.

This section contains Amazon ads. If you see nothing, you need to disable your ad blocker.

This section contains Amazon ads. If you see nothing, you need to disable your ad blocker.

Fergus Duniho has made a four-part video series on the rules of Shogi:

Hirohigo has made several videos on Shogi proverbs.

One of the best ways to learn Shogi is to play against a computer program that will show you where the pieces can move. The following three are Windows programs. If you don't have Windows, you may be able to run them with a Windows API, such as Wine on Linux.

For absolute beginners, Steve Evan's Shogi Variants is a good choice. It describes and shows how the pieces move, and it plays very poorly. It also covers various historical Shogi variants, both large and small, from Japan.

Once you can beat Shogi Variants, you'll need a stronger opponent. Zillions of Games, a commercial program capable of playing many games and puzzles, can play Shogi, and its interface is excellent for anyone trying to learn a game. Instead of being a native Shogi application, it plays Shogi by interpreting a script that describes the rules, known as a Zillions Rules File or ZRF. The Shogi ZRF that comes with it plays very poorly, because it values unpromoted pieces more than promoted pieces, and it handles drops inefficiently. Because of these defects, both Steve Evans and Fergus Duniho wrote ZRFs that play Shogi better, and they combined their efforts into a single script: fdshogi.zip. By combining Evans' ideas about fixing piece values with Duniho's ideas for handling drops more efficiently, the new script plays better and can easily beat Evans' Shogi Variants program while playing at its fastest speed, something the Shogi ZRF that comes with the program cannot do. It also provides new Shogi graphics, including the Chess Motif set seen on this page, taking advantage of ZoG's full graphics customizability. But compared with a dedicated Shogi engine, it is still rather weak. This is good for beginners, but it's not strong enough for more advanced players.

If you need an even stronger opponent, Bernard C. Maerz's BCMGames is a great choice. This free program includes the SPEAR Shogi engine, and it can be used with any UCI-compatible Shogi engine, which should give you as strong an opponent as you will need. It also has fully customizable graphics and comes with many different piece and board images, including those used to make the diagrams on this page.

On our own site, you can play Shogi, as well as many other Chess variants, against other people online, using Game Courier. It will enforce the rules of Shogi, display legal moves, automate the transfer of captured pieces to offboard locations, and spot win/loss/draw conditions. It will also let you choose from a variety of graphics, including both checkered and uncheckered boards, and both pictographic and Japanese piece sets, including all the piece sets displayed on this page and more. 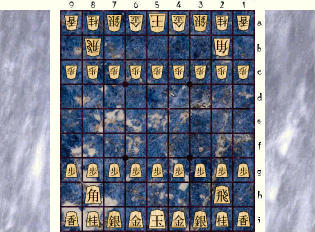 We don't have translators working around the clock to keep up with the latest English version of this page, but we do have some translations of earlier versions.

The board images were made by Fergus Duniho using BCMShogi, because this Shogi program has fully customizable graphics and comes with some very nice Kanji graphics for Shogi, namely the pieces designed by Koma-Shokunin 1, already credited above.

This page was originally written by Hans Bodlaender. In 2002, it was edited and updated by John William Brown. In 2010, it was rewritten and redesigned by Fergus Duniho. David Howe has also made updates to this page.

Thanks also to Ivan A Derzhanski for corrections to the linguistic information on the word Shogi.

Thanks also to Shinsuke Mori for pointing out that the graphics for promoted Silver General and promoted Knight had been switched.