This game is one of several variants of Capablanca Chess, a family of games which extends Chess to a 10x8 board and adds the two missing compound pieces, the Archbishop (Bishop+Knight) and the Chancellor (Rook+Knight).

The starting arrangement guards all the starting pawns, maintains the most logical parts of the FIDE chess set-up in the center squares, and puts the most powerful pieces on the outside of the board. The reasoning behind this setup is to give regular chess players a chance to develop pieces as they might ordinarily, while adding the two new pieces from the Capablanca game into play. Putting the most powerful pieces on the outside seemed reasonable as they would likely be developed later.

This piece arrangement was first invented by David Paulowich in 2004 in an email conversation with Greg Strong. It was not published to the Chess Variant Pages at the time but was included in ChessV as "Capablanca Chess, Paulowich Variant". It was then invented independently in 2007 by John Kipling Lewis who gave it the name Victorian Chess. 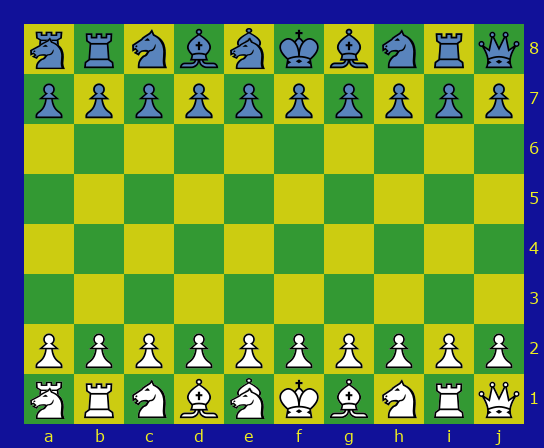 The Archbishop is a piece that can move as either a Bishop or Knight. It is a Bishop+Knight compound in the same way that the Queen is a compound of Rook and Bishop.

The Chancellor is a piece that can move as either a Rook or Knight (a Rook+Knight compound).

Almost all rules are the same as in orthodox Chess with the only exceptions noted below:

Play Online: Victorian Chess can be played on this site with Game Courier. Fully automated, rule-enforcing presets for this game can be found here. You can also view games that have previously been played on Game Courier here.

Interactive Diagram: You can also play against a very basic AI with this interactive diagram (click on "Play it!" under the diagram):