This page is written by the game's inventor, Prussia General.

This is a two-player game that incorporates the element of chance in chess. Initial starting position is randomized and unknown in advance. Because unrevealed flipped pieces cannot protect each other, this game usually evolves into a race to capture as many flipped pieces as possible before the armies could properly deploy. In comparison to the FIDE chess, this feature of Hidden Random Chess adds variety to the game and makes the game proceed at a much faster pace.

The pieces of Hidden Random Chess are not 3D; rather they are circular disks that could be flipped (More on this in the pieces section). Each side start with 16 pieces, with 1 King, 2 Cannon, 2 Rooks, 2 Knights, 2 Bishops and 7 Pawns. With the exception of the Kings on e1 and e8, and Pawns on e2 and e7, each side’s pieces are randomized and flipped on its back. White will have 2 Cannon, 2 Rooks, 2 Knights, 2 Bishops and 6 Pawns randomly hidden on rows 1 and 2, and Black will have the same hidden pieces on rows 7 and 8. (See illustration) 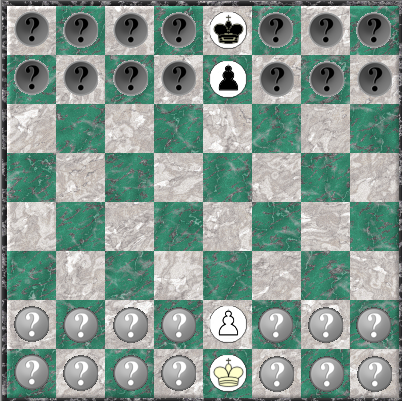 The pieces of Hidden Random Chess are not 3D; rather they are circular disks that could be flipped. When a piece is flipped on its back, neither side could determine whether it is a Rook or a Pawn etc; it is only possible to identify the piece as White or Black. To make said pieces, I used poker chips with hand-drawn symbols on one side.

An unrevealed flipped piece could not move. It could be flipped to reveal its true identity. The action of flipping takes the entire turn, and the newly flipped piece may not move until the next turn. A flipped piece may block ranged units such as Rook, Bishop and Queen, and it may serve as the screen for Cannon.

Available pieces are standard FIDE King, Queen, Bishop, Knight, Rook and Pawn, as well as Cannon from Chinese Chess. Note that at the start of the battle there is no Queen; however a Pawn could promote to a Queen.

All pieces except pawns move exactly as they do in the source games. Pawns may move 2 steps if they are on the first two ranks for white and last two ranks for black, even if they have already moved. For example, if white flips a pawn on c1, he may move it to c2 or c3; if he moves it to c2, then on the next move he may choose to move it to c3 or c4. En-passant pawn capture rules are correspondingly revised to allow en-passant capture anywhere when an opponent’s pawn advanced two squares.

• A move could consist of a pure move, move-and-capture, or a flip. Newly flipped pieces may not move until the next turn; however, it may still give check.

• An unrevealed flipped piece could not move

• Kings may not move into checks

• Castling is NOT allowed

• Promotion rules are the same as FIDE, with the added option of promoting to Cannon

Why is there no Queen at the start of the game?

The Queen is extremely over-powered when the flipped pieces could not defend each other. When an unrevealed flipped piece is attacked, the only way to prevent its loss is to protect it, because if you flip it now, it still may not move and will get captured. At the beginning of the game, the King offers the only real protection; however this is still no match for the Queen, who can target multiple units that are far away. If the Queen is allowed to start, essentially the first player that flips the Queen wins the game 80% of the time. There is a good chance that the first Queen will capture opposing queen while the opposing queen could not move, and even if the opponent find his own queen, there is a good chance that by that time, the first queen has already captured two or more minor piece to tilt the balance. This makes winning more dependent on luck than skills. Note that the Queen is still a pawn promotion option.

Open to suggestions here. I don’t want either side flipping a cannon on e2 or e7, which would immediately end the game. I also want to give the King an easier escape, as it takes 3 moves for the King to leave its original spot if e2 and e7 were unrevealed flipped pieces.

Why is there no castling?

This is simply due to the location of the Rooks being unknown. I tested allowing castling with the corner unit regardless of its identity; in practice it is quite often not easy to move out the units in the way. If any is revealed to be pawns, you would have to flip the second row unit, move it, then move the first row pawn. All this takes 4 moves counting in revealing the pawn. The 4 moves could be better used to launch attack on opponent’s unrevealed pieces. Also, without Queens at the start, the King is not in as much danger during opening and mid games so I don’t see castling as necessary.

What pieces are sufficient to checkmate in a pawnless game?

Against a bare King, the following can checkmate: