A popular variant on Game Courier currently, Cetran 2 has an interesting combination of pieces in whatever starting position is selected (by man and/or machine), many of them powerful, with the superb Sissa piece undoubtedly being the star of the show.

In the XBetza notation used by the Interactive Diagram, an 'i' modifier in a continuation leg stands for 'iso', and can be used to indicate that a slider leg must be of equal length as the preceding leg. So masR would be a hook mover that turns a right corner, and can have both legs of arbitrary length. But masiR would need both legs to be of the same length, and can thus only reach squares on a diagonal through it. The Sissa would be mavsiQ, where 'vs' expands to (f+b)(l+r) = fl + bl + fr + br, i.e. turning 45-degree or 135-degree corners.

This can also be used to indicate rifle captures by sliders, as a back-and-forth move that brings the slider back exactly to its square of origin. E.g. mRcabiR for a Rifle Rook.

I'm sorry if I misunderstood but I think two comments ago you've said that the sissa is a rook/nightrider compound!

No one has said it moves in a straight line.

Please pardon my barging in like that but how I understand the Sissa it moves n spaces like a rook and then n spaces like a bishop or vice versa, How does it move in a straight line. As I see the sissa is some sort lame nightrider.

A Sissa can move to the same spaces as a Rook/Nightrider compound. If it moves at an acute angle, it will end up on the same rank or file as it begins on. If it moves at an obtuse angle, its furthest distance along one rank or file will have to be even, and the other distance will have to be half that. This will put it on a space that a Nightrider could reach. The difference is that it doesn't take the same path to its space as a Rook or Nightrider would.

I told Carlos some time ago that I'd get his Sissa coded so he could have some rule enforcing presets - afterall, Cetran Chess 2 is one of the most played games on the site.  I know how to code it, but I'm not sure if there is a more efficient way to do so.

How I KNOW how to do it is to do it similar to the Rose, where I use the map function to create directions (ex. n, s, nw, se, etc...), and logride to create the movement scheme.  The problem with this is that for the Sissa's movement on an empty 8x8 board, it would have a total of 288 different possible movements (with different placement on the board, of course), and if someone would want to impliment a Sissa on a larger board, they would have to adjust the code and add an extra 36 movements/paths per step up (from 8x8 to 9x9, etc.).

Do you have any ideas on simplification?  I'm thinking variables might be the easiest way, but is there a way to impliment variables into the pathing?  A Sissa moves any amount of spaces orthogonally then the same amount of squares diagonally and vice versa, so instead of doing a path for EVERY possible amount of squares moved each direction, is there a way to say he moved x spaces in this direction, now must move x spaces that direction?  If you can logride with variables, that would cut 288 paths down to 36 AND you can use the same code for any board size.  Even better, if we can say x squares orthogonally (instead of x squares north or south or east or west) then x squares diagonally, that would reduce the paths further down to 8.  Is it possible?

I know its a loaded question, but thank you for the help!

You are welcome, Cameron. Then here are the...

Thanks, Jeremy, for your concepts. Thanks also to all participants in the event.

In case you and Cameron want to continue the out-timed game, here is the special preset.

I will email you to define details on next tournaments.

Given that we have not heard anything from Joe, I express my deepest desire that he be in good health.

Cameron, I'm glad to play the game out for our own purposes, just as Joe Joyce and I hope to play out our games too, but without any bearings on Cameron's well-earned victory in this tournament. Thank you, Cameron, for exhibiting such tremendously great sportsmanship.

Your lavish praise of me earlier is much appreciated and made me feel already like a real winner long before our two games concluded. Thank you for that!

It really was part of my strategy to use as much time as I was allowed but I don't say it was a particularly good or ethical strategy. It may have created an aura of self-consciousness that wouldn't have been there otherwise and this may have detracted from the quality of some of the games, I'm not sure. But regardless, I, for one, learned a lot from playing in this tournament.

Thank you, Carlos, for organizing the tournament. I richly enjoyed it and look forward to the next one. I hope there will be another one in 2015 (I hope to talk with you about this, Carlos as I have some ideas about it; you mentioned wanting to organize other tournaments as well; let's discuss). I enjoyed the lucky games I played against you quite a bit too.

I would also like to come back and annotate each of the games played in this tournament. Perhaps a few of us can collaborate on that.

The tournament helped lure me back to the site and created a really positive turning point in focus, perhaps not just for me. I'm tremendously grateful that I was invited and allowed to play in it.

I tried very hard to win this tournament but I hope to re-double my efforts in the next one. There were points at which I wish I'd played much better (despite taking much time, overlooking some perhaps obvious moves) and/or taken more time to examine my moves (I see these time management issues as an essential part of my learning curve though) and obviously many points at which I benefited from others' blunders. I have a deep and increasing personal, vested interest in improving as a chess/variants-player. For one thing, I enjoy the athletic and aesthetic aspects of competitive chess.

The game Cetran Chess 2, like Tutti Frutti but more so, should help people appreciate that games with all different pieces are certainly as sophisticated as games with twin pieces. Cetran Chess 2 encompasses a nice range of value, with maybe four, five or six levels.

1) Knight (in its own beloved category).

3) In its own category: Cardinal/Archbishop (which in some ways was the star of this tournament with its great mobility and forking ability),

One could also lump the latter three in the same category as it frequently makes sense to allow exchanges among them. The exchangeability of pieces in categories 2 and 4 - 6 is part of what makes Cetran Chess 2 so fascinating. I think you really hit it out of the park with this one, Carlos.

Although the Sissa has a much more limited range than I thought initially (until the endgame it is very hard for it to go more than three or four spaces orthogonally), its tremendous forking abilities give it an edge, in my opinion, over all the other pieces, one that grows as pieces are removed from the board. If you can, I suggest to hang on to your Sissa! Too bad I had to exchange it in my last game.

As with all fairy pieces, I'm still trying to get used to it and even overlooked completely two of its moves in my last game (the ones prior to my opponent enjoying a sizeable material advantage).

The more I play with the Sissa, the more I appreciate it as a piece. It provides a wonderful and vital way of re-envisioning orthogonal and hippogonal distances on the chessboard.

Playing in this tournament gave me a renewed appreciation for both the piece and the game. Thanks again to you and everyone who played with me, including Sagi (don't be discouraged; thank you for conceiving of the idea of this tournament) and Joe (who is always a great player, designer and friend).

As a designer, I am inspired by Cetran Chess 2 to think about creating more games filled with diverse pieces and multi-tiered values. The randomizing keeps it fresh, but I encourage people to play both sides of each new random setup to make things fair. 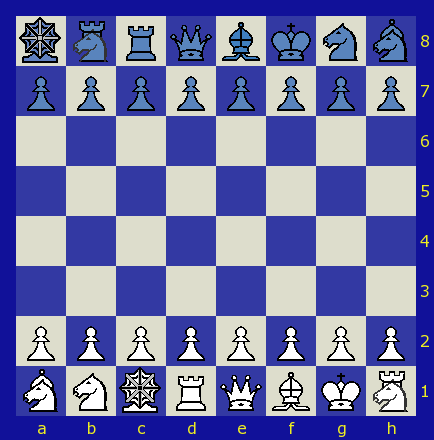