This large board (10x10) form of chess includes Butterflies (in place of knights), Advancers (in place of queens), and Flying Dragons. I came up with the game after going through long lists of piece types that had already been invented, i.e. as found on wikipedia, besides under Piececlopedia on chessvariants.com.

Butterflies are fairly close in value and in their powers to knights, yet they have more novelty to them as a piece type, which appealed to me in trying to invent a new 10x10 chess variant. The piece type was also appealing since, on such a board, bishops are definitely a bit stronger than knights on average (after some value estimating calculations of mine, butterflies seemed to me to be just a tiny bit stronger than bishops on such a board). After not liking any number of often seemingly complex, overly powerful or overly weak chess variant piece types during my search, I found that Flying Dragons seemed to suit my needs too, as is explained in the Notes section further below. Advancers were the sort of roughly equivalent substitute for queens that I was also looking for in a piece type, in terms of their value, and in having more novelty. Hopefully the result of my labours is a rather refreshing and enjoyable variant to play.

A Game Courier preset for play is available. 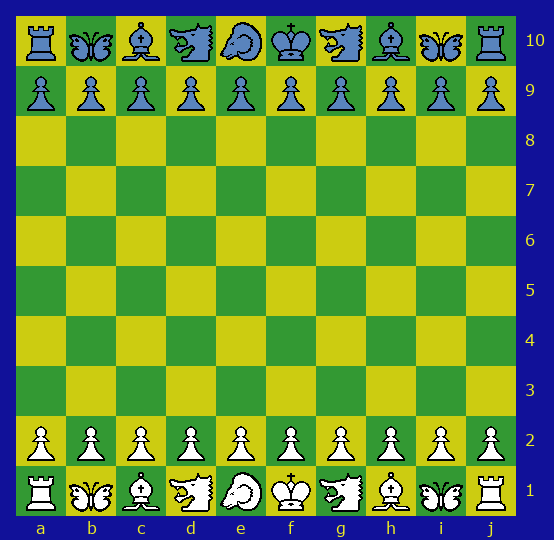 In Butterfly Chess there are 7 piece types. Pawns, Bishops, Rooks and Kings are used, as in chess, and there are 3 other piece types:

the Flying Dragon - moves like a bishop or camel, and is also known as a caliph; Charles Gilman discusses this piece type in the following link (Flying Dragon powers are diagrammed further below, too): Caliph

Here's a diagram showing all the legal moves (i.e. leaps) that a Butterfly can make on an empty board - note that forward movements are not symmetrical with rear ones, and that the pattern as a whole looks like a butterfly (as Betza put it): 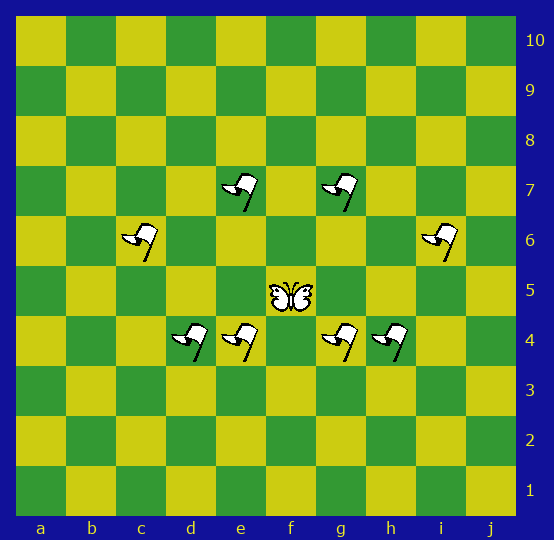 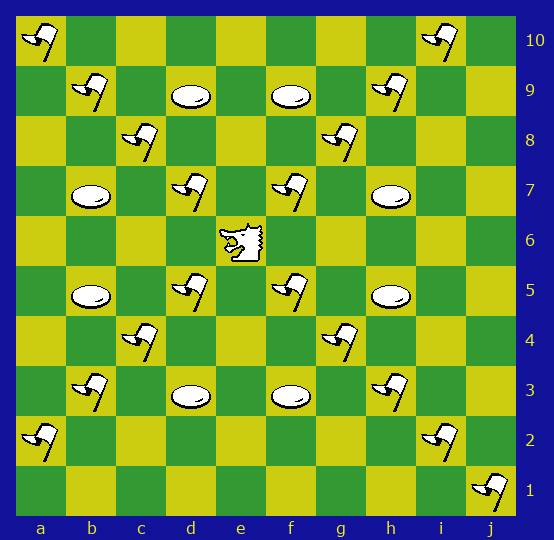 Pawns can promote to any piece type in the setup, except for a king. They can initially advance 2 or 3 steps, rather than just 1 step, if unobstructed. Capturing en passant, is allowed, even if the pawn took a triple step. The capturing pawn would land on the square that is diagonally in front of it on the same file as the enemy pawn that just moved. Here's a link to Omega Chess, which has very similar rules governing legal pawn moves; note the examples of en passant captures: Omega Chess

Stalemate is a draw, as in chess.

I'd tentatively estimate the piece values as follows:

Regarding these values, note I'd estimate a chess knight worth 3 Pawns on a 10x10 board, while I'd put a camel at 2 Pawns, since while it has 8 moves maximum, like a knight, and even more reach, it's also colour-bound. Then, just as in chess a Q=R+B+P, I found my estimate of a Flying Dragon's value on a 10x10 board to be B+camel+P, or 6.5, as given above. Note also that on a large (10x10) board, the value of long range pieces (such as Bs & Rs) increases.

My value for the Advancer is based on the assumption that it is almost worth a chess queen (see the link given earlier in the Pieces section regarding this); I arbitrarily decided the difference between the two pieces ought to be less than a pawn, and estimated an Advancer as worth half a pawn less than a Flying Dragon plus a Bishop on a 10x10 board.

Betza's mentioned that such a piece as the Butterfly could ('in the general case') be worth a bit more than a mushroom (which in turn he said is close in value to a chess knight; see the link given earlier in the Pieces section), and that prompted me to suppose the Butterfly as having about the value of a Bishop on a 10x10 board. My later calculations were in line with this: just as a chess Q=R+B+P, I reckon a Butterfly's value on a 10x10 board to be roughly (1/2*(knight-P)+1/4*(camel-P)+P)+1/4*(K-P)+P = 57/16, or approximately 3.5, as given above.

Regardless, I like the setup I've chosen, since bishops can be deployed in similar ways that they are in chess, and it's possible for either flying dragon to soon be developed in a way that it continues to protect the pawn positioned directly in front of its adjacent bishop. I also liked that a rook plus a pawn is worth a flying dragon on a 10x10 board (in my estimation), which adds one more type of [near] equivalent exchange of pieces that a player could possibly make during a game.

Note that Butterfly Chess is currently supported by ChessV.