Palace is played on a 7x7 board. There is a 3x3 Palace at the centre of the board where the King, Archbishop (piece description below), and Rook can move and/or capture like the Queen.

The setup for Palace is similar to Orthodox Chess, except for the absence of the Queen and the replacement of the two Bishops flanking the King with Archbishops (piece description below): 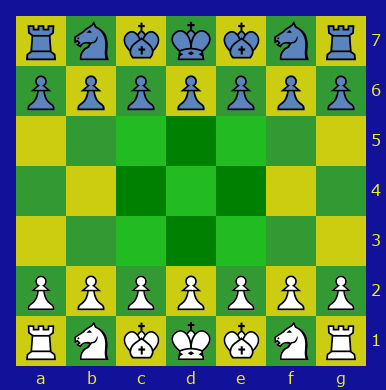 There is a 3x3 Palace at the centre (rules description below).

All the pieces move as in Orthodox Chess, except for the following:

Upon reaching the 3x3 Palace at the centre:

These pieces will revert to their default moveset upon leaving the Palace.

Upon reaching the last rank:

Play with the ChessCraft Android app:

5x5 board with Rooks replaced by Shields which promotes to Fortress at the last rank: 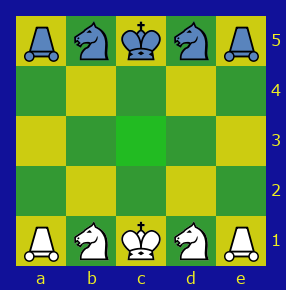 The King gains the move of a Paladin upon reaching the Palace square at the centre of the board. This effectively ends the game as it guarantees a checkmate in a 5x5 board. The King ascends to a God King and the opponent King has nowhere to run.