This is one of my simplest variants. It is a "differently-moving-usual-equipment" variant, but being too different to be a truly modest variant it gets its own page. It is a fairly obvious idea, to the point that I checked as thoroughly as my time online allows that it didn't duplicate an existing variant. Since posting it I had my attention drawn to the earlier Mitosis chess, which uses the same piece types but on a larger board and with special rules when they are captured. Since posting this variant I have also noticed that Ralph Betza and Philip Cohen's earlier Tutti-Frutti Chess makes four of the seven move additions, and that this one effectively adds the rest symmetrically.

The idea arose from wondering how I might use my recently renamed Gnu compounds. Since I posted this page that idea has seen the light of day here as a game with every compound of Rook/Bishop/Knight/Camel but none of the simple pieces themselves. Since then I have also added a variant with every compound of two Yang Qi pieces - but none of three or more as Yang Qi itself has no compound pieces. Rather than drop the reader in at the deep end I decided to first post a simpler version with no Camel element - which happened to suit a FIDE array with added moves and so a smaller board and separate page. This is it. 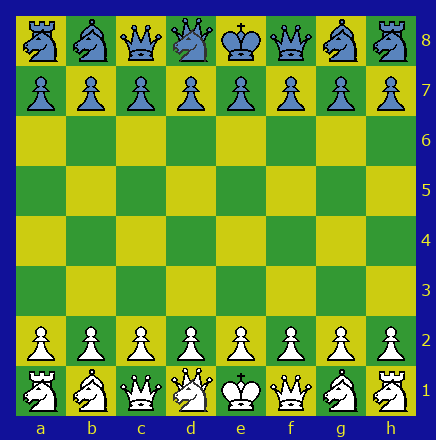 The initial double-step Pawn move, En Passant, and need for promotion on the far rank are as in FIDE Chess. Promotion is however to Ace/Queen/Marshal/Cardinal rather than to simple pieces.

Castling is the determining factor in the choice of how each FIDE piece has been enhanced. As the Ace and Queens are too near the King to Castle, and Cardinals have no orthogonal move, Castling is allowed only with Marshals, with the same rules as apply in FIDE Chess to Castling with Rooks. Another change is nomenclature, "Queenside" becoming "Aceside".

Check, Checkmate, and Stalemate are as in FIDE Chess, except that they will tend to be achieved more quickly.

The most vulnerable Pawn is on file g, as only the King's Queen protects it. Multiple pieces protect the rest. Paradoxically the file f Pawn is the most protected.

This variant made me wonder what other variants could substitute stronger pieces for the FIDE array. Ralph Betza's Tripunch Chess is one example, which may have had a subconscious influence on Overkill Chess now that I think about it. Another possibility is to use Tim Stiles' WOLF and FOX for Rook and Bishop respectively. Their compound the WEREWOLF could replace the Queen and the DOUBLE RHINO the Knight. The peculiarities of the Wolf move make it best to drop Castling. Having seen the connection to Tripunch Chess I could suggest calling such a game Quadripunch Chess.