The Besiege Chess family of variants and my own offshoot Quadruple Besiege Chess use two complete FIDE boards and sets, with one King aside replaced by a third Queen or even an Ace, or a King and Queen with "missing" compounds. It occurred to me that similar variants might be played with fewer squares and a single FIDE army aside. One variant of this kind is Dave Reynolds' Lincoln Circular Chess, one of the more publicly played British Chess variants, but this makes for weak Bishops with its few files. One solution to this is to have four files in camp but widen to eight on empty ranks. This is the equivalent of each army being split between the camps of two 48-square cruciform boards, hence the name.

I then considered how to arrange the pieces. I considered arrays balancing major pieces between the two halves, and others concentrating them on one half. I eventually came up with six 2-player single-besiege variants. The first five can also be played double-besiege (circular - wrap the end ranks round), Moebius (wrap the ends round cz-fk, dz-ek, ez-dk, fz-ck), 4-player, or 4-player quadruple-besiege (join up each army's two camps). As half the subvariants are wraparound and half (an intersecting half) 4-player, I have ticked (among others) the Multiplayer and Round boxes for this page.

The last is a microregional in the style of Isis and Cam - or more closely Wey with its lack of King - but with multiple Rivers. This is because the setting is split between rivers, with the university in a town on the Essex Colne (Colchester) and the cathedral in one on the Chelmer (Chelmsford), with the Essex Blackwater in between. The variant name CoBlaChe is an acronym for the rivers. For once the Che does not stand for Chess, which is coincidentally a river name elsewhere! The Colne in this variant should not be confused with another of the same name, the other side of London. With CoBlaChe very much in the minority, and the River so changed from Xiang Qi, This page does not have the Xiang Qi box ticked. 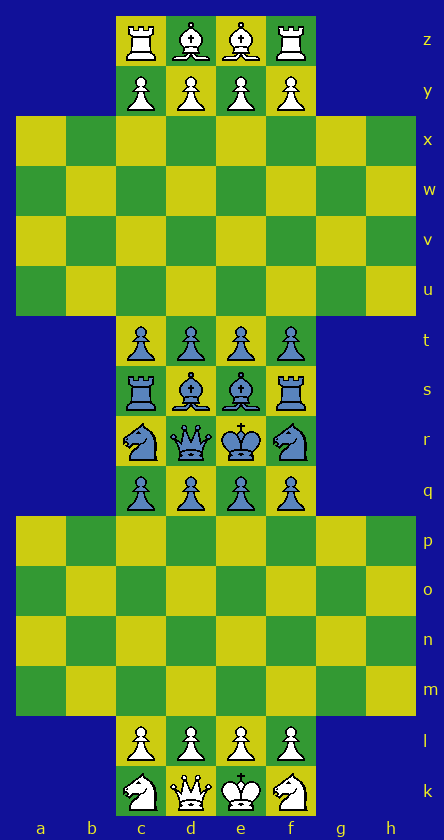 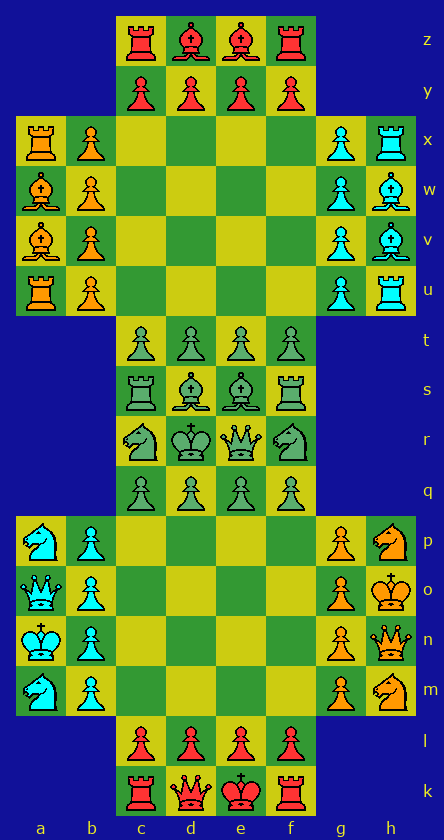 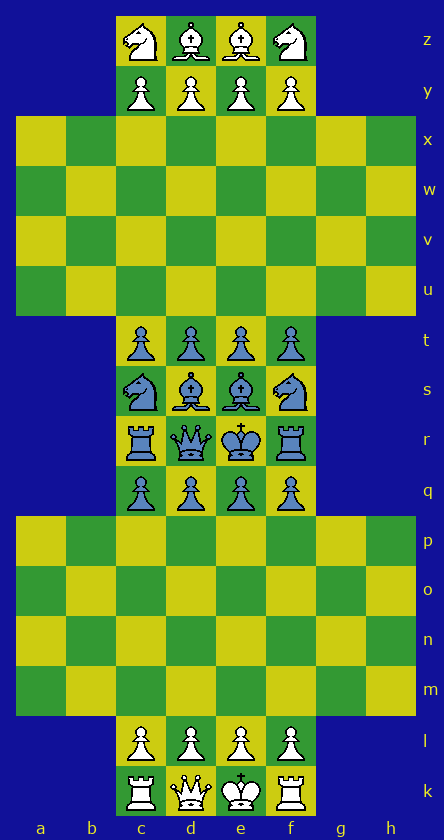 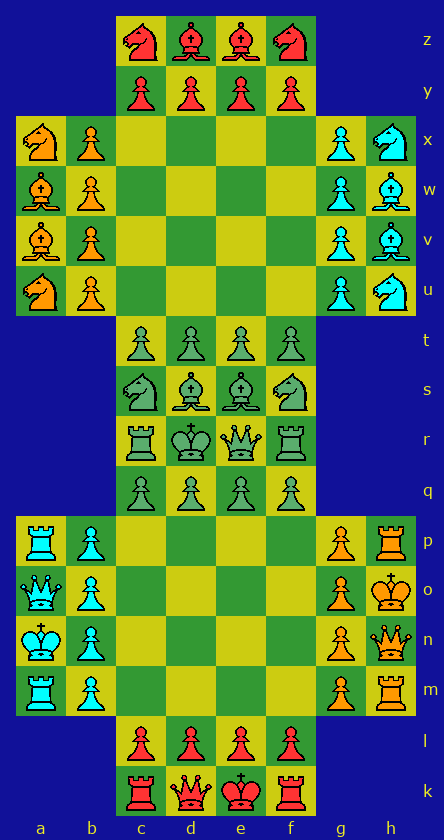 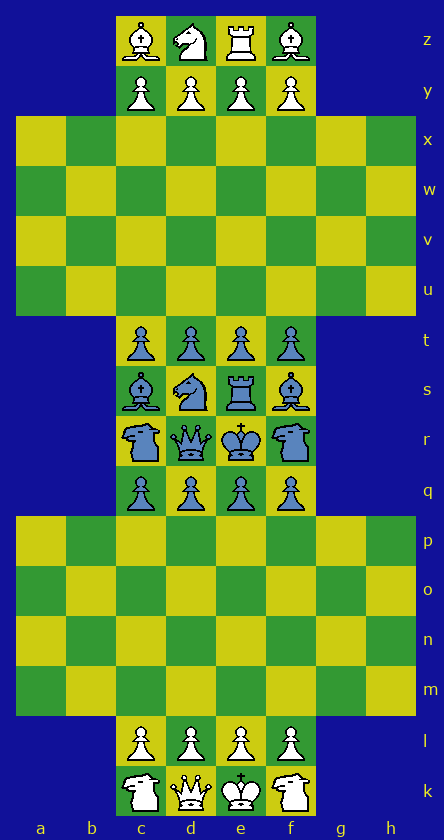 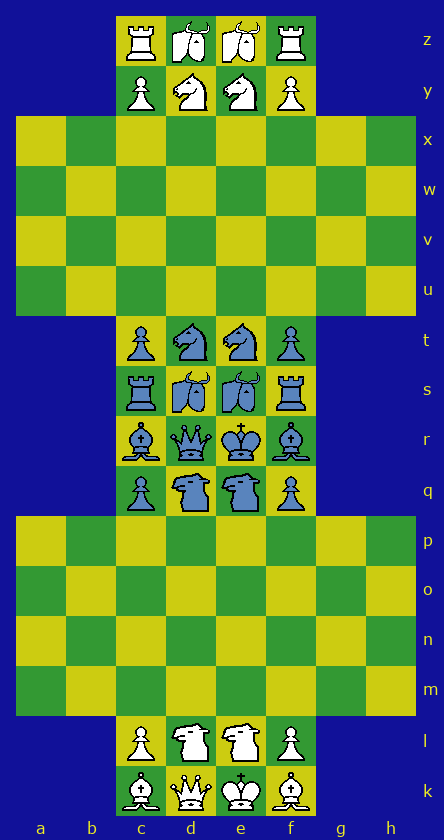 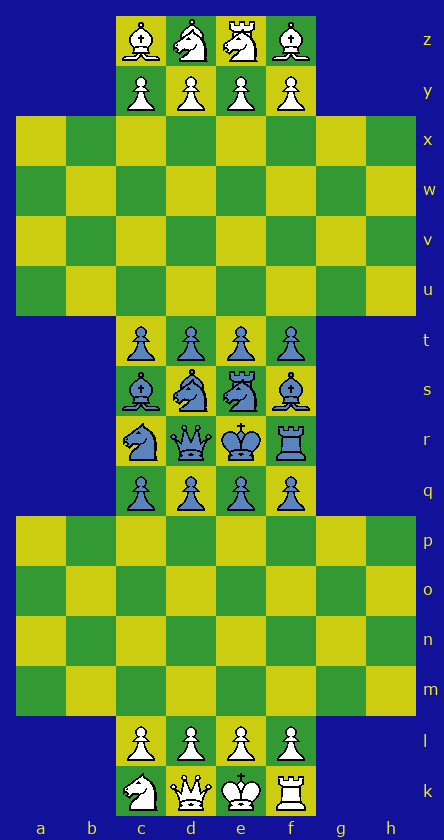 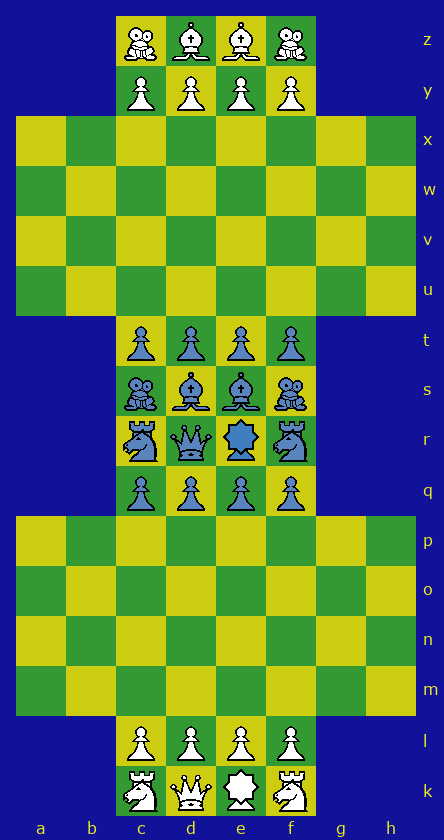 For reference CoBlaChe has a River every four ranks dividing the board into four sections.

Groups of pieces include: As usual the Bishop and Camel are colourbound and the Knight and Camel cannot lose the move. The Frog is an unbound compound of two differently-bound pieces, and can lose the move in 5 moves.

In 2-player subvariants play alternates between the two players starting with White. In 4-player ones it progresses anticlockwise starting with Red.

A Knight move, and each step of a diagonal move (though not necessarily the entire move), must be made within a solid block of squares with none missing. For example a Queen or Bishop may move dl-cm-bn but not cl-bm.

Pawns have an optional initial double-step noncapturing move in all variants except CoBlaChe, and can immediately be captured En Passant by anyone else's Pawns. CoBlaChe has no double-step Pawn moves. In 2-player variants, Pawns are confined to the files having squares on every rank. In 4-player variants Pawns cannot enter an adjacent-colour camp but must continue toward the nearest opposite-colour one.

Pawns reaching an enemy non-Pawn file can be promoted to any other capturable piece occurring in the array except in CoBlaChe, where Pawns crossing a River are promoted to Wazirs. Wazirs crossing the middle River may optionally be further promoted to a captured piece.

2-player Checkmate and Stalemate is as in FIDE Chess except in CoBlaChe, where victory is by capturing the Queen and Prince, a Marshal, a Bishop, and a Frog. In 4-player subvariants victory is by deliverig the last Checkmate.