Makruk is played on an 8x8 board like Chess.

One can easily place both Chess and Makruk on the same board and pit them against each other. However, the Chess army may be too strong with the long-range Queen and Bishop, compared to the much weaker Seed/Met and Nobleman/Khon in Makruk.

Strong Makruk is an enhanced Makruk variant created to face the Chess army in a more balanced matchup. The moveset for the enhanced pieces in Strong Makruk are described below. 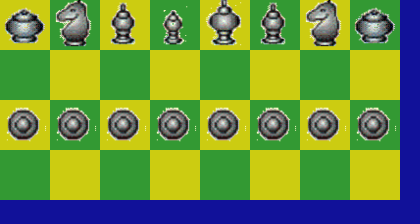 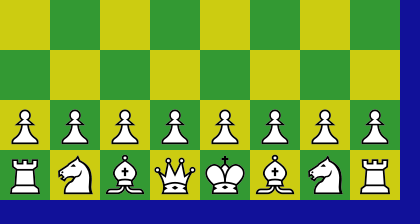 (Note: In the reverse matchup, the Strong Makruk King for White is on d1 instead of d2 as in the regular Makruk setup.)

The Chess pieces of Rook, Knight, Bishop, Queen, King, and Pawn move as in Orthodox Chess.

Moves as a regular Bia/Pawn in Makruk, with the exception of the promotion rule described below

The Pawn promotion and Castling rules are the same as in Orthodox Chess.

The Chess army must be careful to stop the Strong Makruk Bia/Pawn advances, or it will be bombarded with a horde of Nobleman pieces from the enemy's 6th rank onwards. If the King is still on the back rank, it can be cornered easily by mutiple Nobleman pieces into checkmate.

The Seed-Horse and Seed-Boat which can move diagonally in addition to the regular Knight and Rook moves are also formidable pieces which can be hard to stop. Exchanging a Knight or Rook with the equivalent Seed-Horse or Seed-Boat would be advantageous for the Chess Army since they are of higher value in the Strong Makruk army. Without the Seed-Horses and Seed-Boats, the Chess army will be in a stronger position since the Queen is more powerful than the equivalent Noble-Seed.

Since Bia/Pawn promotions are faster in Strong Makruk, the focus should be on promoting as many Bias as possible in the least number of moves. While the Noble-Seed is a strong piece equivalent to the Chess Queen, it cannot move orthogonally sideways or backwards. So, it should be developed as soon as possible to support the Bias in promoting to Nobleman pieces. The Seed-Horse and Seed-Boat are also powerful pieces that can be used to support a strong Bia structure.