If you've poked around the Chess Variant Pages crafts section, you may have come across my EconoSplurge Chess Variant Set, which is an attempt to combine some beautiful (but fairly expensive) wooden Exchess variant pieces with variant boards made of versatile, inexpensive single squares of coloured felt.

I've wanted to make a Dragonchess board with my EconoSplurge set for a while. Dragonchess is a huge 3D variant invented by Gary Gygax of Dungeons & Dragons fame, featuring three 8x12 boards in a stack. This article describes how I made my set.

Here is a photographic overview of the three Dragonchess boards, both with and without pieces. One thing the Dragonchess page does not mention, but which the original Dragon article does, is that the three boards are supposed to be different colours. The bottom Underworld board is coloured brown and red instead of black and white, the middle Earth board is coloured green and amber, and the top Sky board is coloured blue and white. While I couldn't very well stack floppy felt in three dimensions, and had to lay the boards along the plane of the table instead (an option Gygax himself mentions), I'm happy to say the colours worked out well, at least. 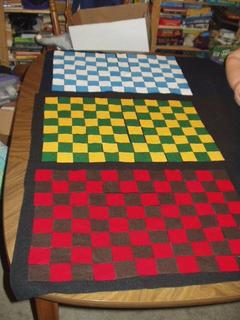 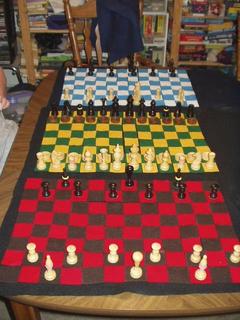 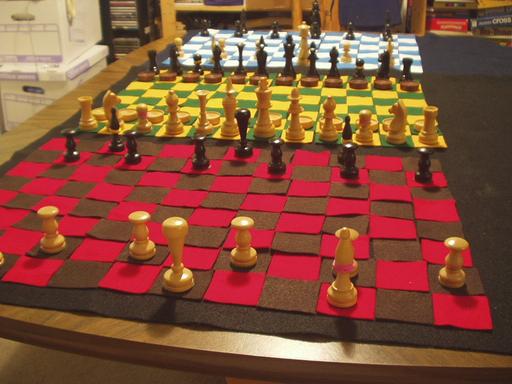 Figure 3. The Dragonchess board setup as seen from the Underworld 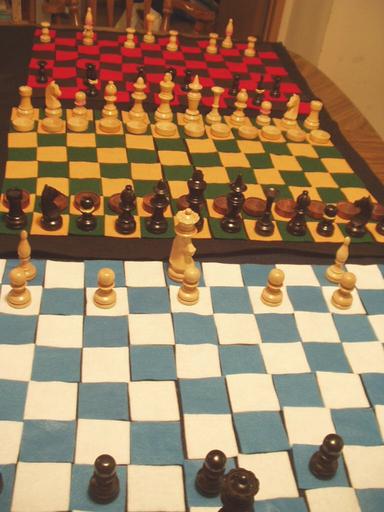 Figure 4. The Dragonchess board setup as seen from the Sky

This section shows close-ups of the Dragonchess pieces. Besides the board colours, the piece colours are also unusual in Dragonchess. Instead of White and Black, the sides are supposed to be Gold and Scarlet, respectively. There was no way I was going to paint my Exchess pieces Gold and Scarlet -- they're the Splurge part of my EconoSplurge set, after all -- so I made do with the usual colours. I hope you'll agree the setup still looks nice. 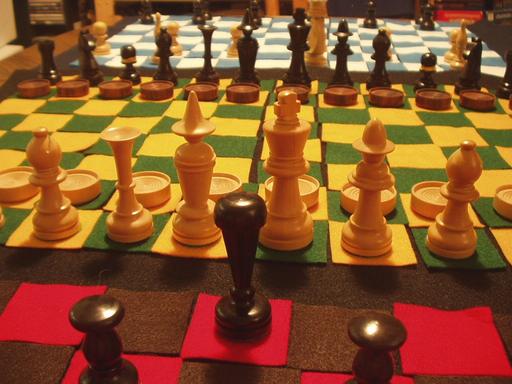 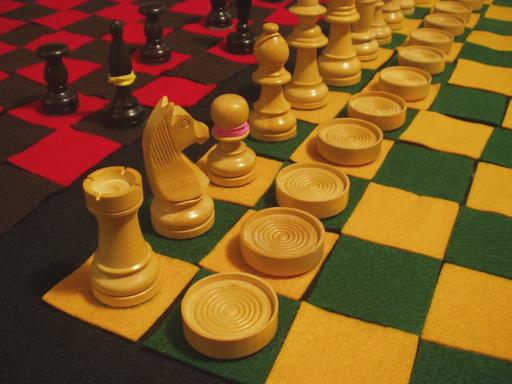 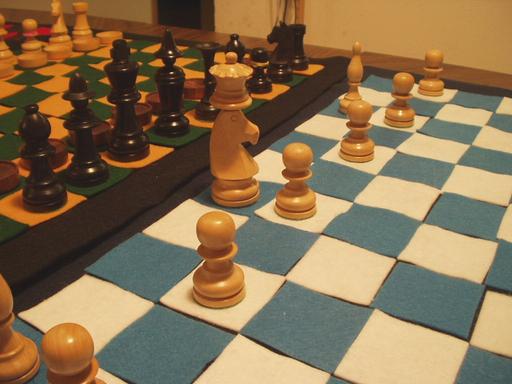 As I mentioned, Dragonchess is supposed to be a three dimensional chess variant, with one board stacked above another. I feel I've cheated my readers somewhat of its 3Dness by laying the boards out side by side. As compensation, I'm offering these stereograms (three-dimensional photos) of the board and pieces. The first (Figure 8) is a 3D detail of the photo above (Figure 7). The second (Figure 9) is a somewhat overexposed 3D shot of Black's array on the Earth board. The last one (Figure 10) is the best, a 3D shot of the whole board with considerable depth.

These stereograms are of the "cross-eye" variety rather than the "wide-eye" variety. For instructions on how to look at them, please consult Mark Newbold's page, which has a simple example for practice viewing.

Please be gentle with me; these are some of my first stereograms. Now, how about some juicy 3D photos of a real 3D chess variant board, like a plexiglass Dragonchess set or Star Trek Tridimensional chess? Anyone? 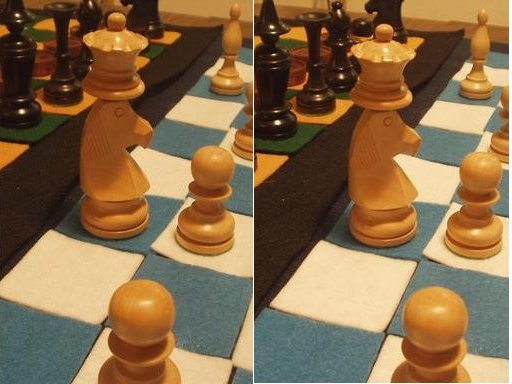 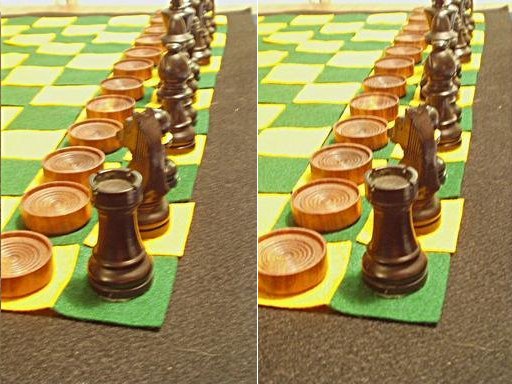 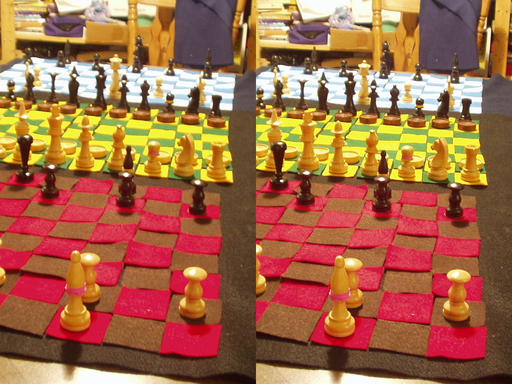 The following table describes which Exchess pieces I used to represent Dragonchess pieces, how many are needed per side, and mnemonic rationales for assigning the pieces that way, with a few other notes.

I own Exchess sets 1+C and 2, that is, Exchess Set 1 and Set 2, plus Set C, which contains stylistically matching pieces for orthodox Chess and can be purchased at a discount with set 1. I found this gave me enough pieces for everything except the 12 Warriors per side that I needed, which roughly correspond to pawns on the middle board. I bought a set of hardwood checkers without a board at Uncle's Games that roughly matched my Exchess pieces in colour. Since there are 12 checkers per side in the version of checkers played most commonly in the US, I had exactly enough for my Warriors.

Where the table says that a piece is marked, that means I snapped a rubber band around it. As you can see in the photos above, the Black (Scarlet) pieces have yellow bands, and the White (Gold) pieces have pink ones. These were the rubber bands with the highest contrast I had on hand, but maybe they should be reversed for the sake of mnemonic clarity.

Thanks to geometer and expert stereoscopist John Braley for helping me get these images right. Thanks to master editor Marty Hale-Evans for a light edit. Thanks to both of them for dissuading me from using wiggle stereograms. The Dramamine is in the mail.

I got to play a game of Dragonchess with John Braley at Seattle Cosmic Game Night on 21 January 2006. John played White.

The game lasted several hours, and John resigned. This was astonishing, as John is a former U.S. Master of orthodox Chess and I hardly ever beat him at anything, let alone chess variants. I hypothesise that Dragonchess was just too close to regular Chess and set up "beat frequencies" in John's brain. For example, at one point he placed his Dragon directly in front of one of my Sylphs, readying to check me. However, he had forgotten that Sylphs are much like Berolina pawns, moving diagonally and capturing forward instead of the other way around, as in regular Chess. My Sylph took his Dragon and broke the back of his attack.

Here are some photos of the game. 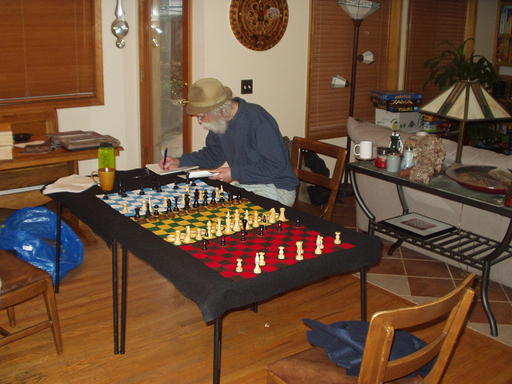 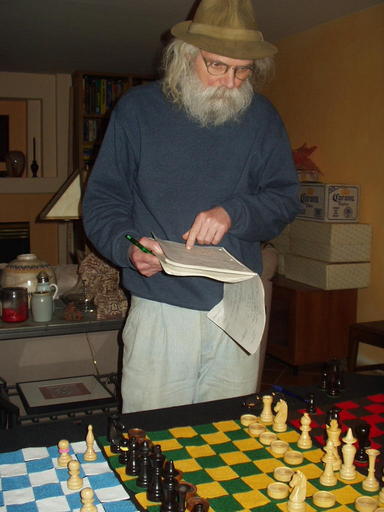 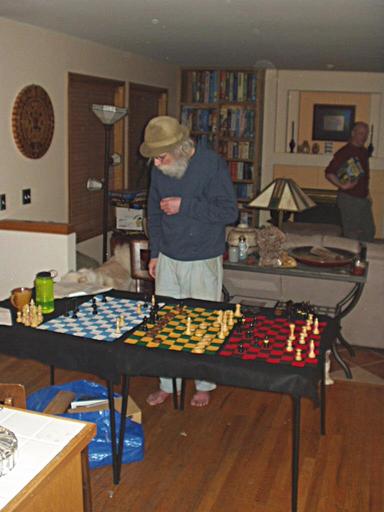 Figure 13. Where did all the Sky pieces go?