The recent explorations on Mars have not yet uncovered a chess variant that is played on this planet. While it seems unlikely that the Pathfinder will discover such a game, author Edgar Rice Burroughs (well known for his Tarzan books) describes a form of Martian Chess.

Burroughs wrote a series of adventure (science fiction) books that play on the planet Mars, called Barsoom in the books. In the fifth of these books, called The Chessmen of Mars, a game is played, and the rules are given. This `Martian Chess' is Jetan, the game whose rules are described below. The game is very playable and entertaining according to Gollon. In 2012, the movie John Carter came out, produced by Walt Disney Pictures, directed by Andrew Stanton, and starring Taylor Kitsch, Lynn Collins and Willem Dafoe. This movie is mostly based on the first of the books from the series (but with several alterations to the story, although I think it kept close to the spirit of the books); a character named Edgar Rice Burroughs also plays a role in the movie, as well as in the books (as nephew of John Carter).

Following US copyright laws, the books appear to be now in public domain, and can be read at the website of the Gutenberg project.

Here you see the cover of the book where the game appears. You can also view the cover in more detail (file of size 221K.) 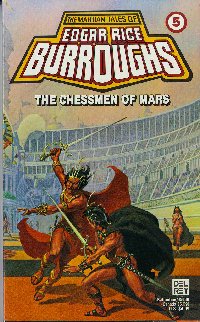 The game and its rules

The game represents a war between a yellow and a black race of Martians.

There are two places in Burroughs' book where the rules are given: 1) they are summarized at the very end, 2) they are also presented in Chapter 2. It seems that very few people paid attention in the past to this chapter 2 which contains some interesting and unique informations.

Jetan has been described in several books and many places on the web. However, the given rules suffer from different interpretation of the somewhat minimalist text from Burroughs. Even worst, some wrong interpretations have been re-taken by other authors with more errors. The rules given hereafter are the results of going back to the original source (that you can check yourself). Play-testing with Zillions software has also been very useful since it has definitively shown that the end-game rules had to be revised.

The game is played on a checkered board with 10 rows and 10 columns; squares have orange and black colors. The color of the left corners at each chess players is not specified by Burroughs. Each player has the following pieces: one Chief, one Princess, two Fliers (General); two Dwars (Captain); two Padwars (Lieutenant); two Warriors; two Thoat (mounted Warrior); and eight Panthans (Mercenary). The Princess are at the Chief's right side for both players, therefore the Chiefs are not facing each other. On Mars, the board is usually arranged so that the Black pieces are payed from the south and the orange from the north. The pictures of the pieces here are from these rules writer's imagination, and do not come from the book:

No piece can cross the same square twice in a single move.

The number of allowed square for the move of a given piece must be understood has an exact number: moving three squares does mean three, not one, two or three.

The Chief moves three squares in any direction or combination of directions, orthogonal or diagonal. It cannot jump over intervening pieces.

The Princess moves three squares in any direction or combination of directions,orthogonal or diagonal, but can also jump over squares that contain a piece. The Princess cannot take other pieces. The Princess may make once during the game an escape move: it can then move to any unoccupied square on the board.

The Dwar moves three squares horizontally or vertically or in a combination of these directions. It cannot jump.

The Flier moves three squares diagonally or in a combination of these diagonal directions. It may jump over intervening pieces.

The Padwar moves two squares diagonally or combination of these diagonal directions. It cannot jump.

The Warrior moves two squares horizontally or vertically or in a combination of these directions. It cannot jump.

The Thoat moves two spaces, one straight (orthogonal) and one diagonal in any direction. As clearly stated on Chapter 2 of Burroughs' book: IT MAY JUMP over intervening pieces. Then, the Thoat may reach 12 squares at the maximum: 8 like a knight from orthodox chess and the 4 orthogonally adjacent to the case it stands.

The Panthan moves one space in any direction except backward: this is understood as one square straight forward or diagonally forward or sideways (5 directions). (Some other sources also allow backward diagonal. The original text is not clear enough on this point. However, playing with Zillions has demonstrated that the Pathan would be superior to other piece if allowed to go diag-backward. It is then unlikely that this was what E.R.B. meant.). Panthans do not promote.

The game is a draw in the following cases: when both sides are reduced to three pieces, or less, of equal value and the game is not won in the ensuing ten moves, five apiece or when a player takes the Chief of the opponent with a piece, different from his own Chief.

These original rules are not very playable as Gollon pointed it out, since it gives too many draws. This has been studied by Jens Markmann and Jean-Louis Cazaux while programming a Zillions file for Jetan.

The most pleasant ending rules is the following:

If the Chief is taken by another piece than the opposite Chief, the game is not a draw. There is no more consequence than the capture of the Chief which is lost for its player.

We can only hope for a sequel, based on the fifth volume of the series. In the book, Jetan is also played in real life, with a capture implying a fight on life and death. It could make another exciting movie, not only for chess variant enthousiasts.

Jens Markmann has made a very good Zillions file playing Jetan with those correct rules and using the graphics presented here.

Written by Jean-Louis Cazaux correcting an earlier version written by Hans Bodlaender. Some small changes by Hans Bodlaender in 2012. The statement that the books appear to be in the public domain is an educated guess, and should not be seen as legal advice. Tyler Jones sent the information about the old and modern variant of Jetan. Graphics and pieces images created by Jean-Louis Cazaux. Cover of book also sent by him. WWW page created: July 16, 1997. Last modified: March 20, 2012. ﻿