This page is written by one of the game's inventor, Nemo Thorx.

This variant was concieved from the logic of "what if all movement rules were rotated by 45degrees?". The movement rules were then polished  and grouping pieces into the corners for starting. Pawns now naturally move towards the center, hence the name.

Using a standard board and pieces, the setup is as shown 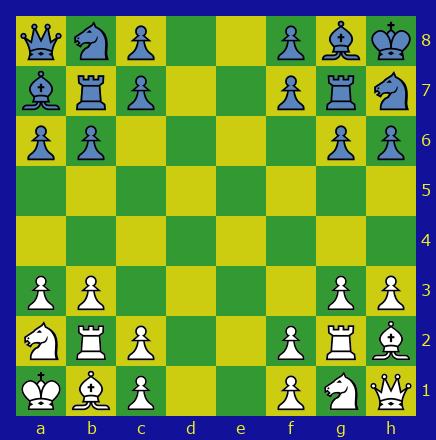 Standard pieces have standard powers. Only their movement differs.

Pawns move forward on the diagonal (two for opening), and always move towards the center according to the quadrant they are in, hence the name. As they cross into an enemy quadrant, their "forward" diagonal alters to continue their march to the center. Pawns are also colour-locked except when they attack, which is now on traditional grid, and valid in all FOUR directions. This is the only way a pawn can move away from the center. A pawn that reaches ANY edge of an opponents quadrant (14 total target squares) may be promoted. Note that it has to battle every outward step of the way to earn it! Each player has two pawns which can theoretically be promoted in as little as two moves (the pawns on the players own edge, taking sideways twice towards the enemy). Other pawns have a longer fastest-theoretical path to promotion, depending on their starting position.

Knights still move "forward two and across one" but now along the diagonal, meaning each knight is now colour-locked, and moves further at a time. For comparison, I note that "forward two and one across" on the diagonal is equivalent to an on-grid move of "three and one" (compared to regular chess being "two and one")

Royalty, rooks and bishops move as per traditional chess,

There is no "castling" or en passant.

Originally written up online at http://wiki.thorx.net/wiki/Pawn_Blackhole_Chess