Knightmate was invented by Bruce Zimov in 1972. It differs from Chess by having a royal Knight and non-royal Kings. Knightmate tournaments have been played in the American postal chess organization NOST, and in the Italian chess variants organization.

The Setup is as in orthodox Chess, except each player has one royal Knight and two (non-royal) Kings. The Kings start where the Knights usually do, and the Knight starts where the King normally does. 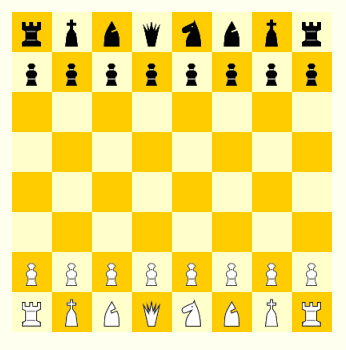 The Kings are not subject to check or mate, but the Knights are! Win by checkmating the opponent's Knight.

Castling — Knights can castle with Rooks under the same rules and restrictions as Kings can in Chess. Although the Knight is usually a leaper, it still cannot castle through check.

Pawn Promotion — Pawns promotion is as in Chess except that Pawns may promote to a King but not to a Knight.

The Knight can be harder to checkmate than a King. For single piece endgames, only Q+N can checkmate the lone N — even a Rook cis not sufficient, nor is a King. Any two-piece advantage can enforce checkmate, though, except for two Bishops on the same color, or N+N+N, which isn't even posible in Knightmate.

Play Online: Knightmate can be played on this site with Game Courier. Fully automated, rule-enforcing presets for this game can be found here. You can also view games that have previously been played on Game Courier here.

Computer Play: Knightmate is fully supported by ChessV, a free open-source program for playing chess variants. It can also be played with Winboard using the included Fairy-Max engine.

Interactive Diagram: You can also play against a very basic AI with this interactive diagram (click on "Play it!" under the diagram):