WinBoard / XBoard is a popular open-source Graphical User Interfaces (GUI), which allows you to display Chess games on your PC. It can run on Linux and Mac OSX (XBoard) and MS Windows (WinBoard). The GUI acts as an interface between a Human player and an AI (referred to as 'engine'), between two engines, between a Human and an internet Chess Server (ICS), or an engine and an ICS. It provides the functionality of displaying the game and stepping through it, saving and loading the game as PGN file, saving and loading game positions as FENs, and acting as arbiter between the playing entities (checking moves for legality, adjudicating games that are theoretical draws,etc.)

Note that a GUI is a passive tool, the software equivalent of a Chess board, and does not implement any game-playing ability itself. (It does know the rules of some 33 Chess variants even without the aid of an enginem, though, and uses this knowledge to reject illegal moves, or indicate where a 'picked up' piece can move to.) For playing a game it is dependent on engines, which are fully independent programs communicating with it in text mode, through a bi-directional stream of commands, collectively known as the WinBoard protocol.

WinBoard started its live as a GUI for GNU Chess, but by now there are many hundreds of Chess engines that support WinBoard protocol. Many of these engines play Chess variants, some of them several different variants. There even exist engines that can be configured by the user to play variants with almost arbitrary rules.

Apart from the 33 Chess variants for which WinBoard has pre-programmed rules, there are many additional variants it can play through user configuration. XBoard supports 66 piece types, with the possibility to provide external image files for each of them, although many (in XBoard actually all) of them have pre-defined images, and a predefined notion of how they should move. The user can alter the board size, specify which of the 66 pieces should participate, provide an initial setup and specify how the pieces should move, thus modifying one of the standard variants into his own. These instructions can be collected in a settings file, so they can be easily recalled.

Amongst the variants currently supported by WinBoard are:

WinBoard supports 66 piece types. Some of these have a standard move programmed for them, but the move of all pieces can be (re-)defined by user or engine through providing a move description in (extended) Betza notation. This does support the usual leapers, sliders and hoppers, as well as their divergent versions through separately specifying moves and captures. It also supports arbitrary lame leapers and multi-hoppers, (through the 'a' = 'again' modifier of the XBetza extension), including those with bent or bifurcating trajectories. It supports locust captures of up to two additional victims. 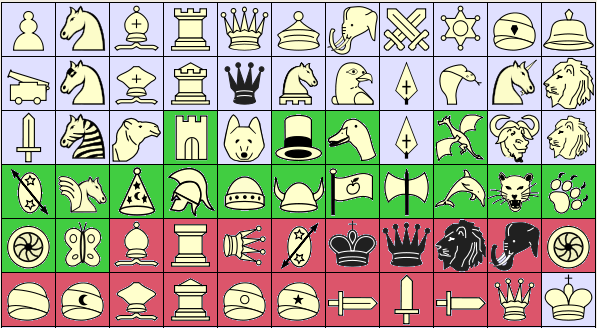 Built-in piece images of XBoard; WinBoard only has those on blue background.

The pieces for which predefined bitmaps are provided in several (not yet all) sizes, and for which WinBoard also knows the move (so that they can be used in combination with legality testing), are:

Specific standard variants might define moves of other pieces according to their needs, in a non-universal way. In the variants Xiangqi and Shogi the pieces sometimes move a bit different, e.g. a Knight represents a Mao in Xiangqi, and a Honorable Horse in Shogi. The Ferz and Wazir are used as Silver and Gold Generals in Shogi. Especially Chu Shogi defines many pieces in a vey idiosyncratic way.

WinBoard knows a variant named 'fairy' to offer a general way to play variants where WinBoard is not aware of the specifics; In variant fairy all pieces can be used to setup a position through a FEN. By switch legality testing off, one can use the piece symbols that WinBoard_F knows to represent other pieces than those for which they were originally intended. This way it is possible to play modest variants like Knightrider Chess or Chancellor Chess (replacing Knights by Knightriders, or Queen by Chancellor in the FIDE array), for which some engines exist.

There are several places where WinBoard is hosted for download, usually as a zip archive, containing the executable and a readme file. For the up-to-date list of hosts, see the WinBoard_F homepage. To setup WinBoard_F on your computer, you only have to download the zip, and extract the winboard.exe to a folder on your computer you created for the purpose. It should appear as a Knight-like icon inside the folder. When you double-click the icon, it should start up WinBoard as a dialog box, asking for what purpose you want to use it. When you have no engines yet, you should tick "Just view or edit games", before clicking OK.

The first time you run WinBoard, it uses its default settings, sizing the board so that it almost fills the entire screen. In the menu "Options -> Board..." you can then select a board size you like best. Note that the fairy pieces are only supported for board sizes "middling" and "bulky", and to a lesser extent in "petite". For other board sizes they might appear as empty squares. Capablanca pieces are supported in all board sizes.

WinBoard will remember its settings for next time when you terminate it. For this purpose it creates a file winboard.ini in its folder. This file contains the setting of all the options in force when WinBoard terminated. Note that the options as they appear inside that file could also be given on the command line for starting WinBoard (if you start it from the "run" command in the start menu, or from a command-prompt box, rather than by clicking the icon), in which case they overrule what was in the .ini file.

Engines to act as AI for WinBoard

To play these variants against the computer, one would need a WinBoard-compatible engine capable of playing the variant. As mentioned, there are hundreds of engines for normal Chess, dozens that can play Chess960, (e.g. Glaurung, DanaSah), a handful that can play Crazyhouse (e.g. Sunsetter, TJchess)or Shatranj. There is one WB engine that can play Xiangqi, (Hoixiangqi) and one that can play Shogi (GNU Shogi). There are 8 WB engines now that can play Capablanca Chess (e.g. Joker80, TJchess10x8). In addition, there are engines that can themselves be configured to play many variants. Fairy-Max is an engine that can be configured to use almost arbitrary fairy pieces on boards of size upto 12x8. So it can play games like Capablanca Chess, Shatranj or Courier Chess. It was announced that the next ChessV release will also support WinBoard protocol.

All engines mentioned above are available for free download. You will have no trouble finding places that host them, nd many others, using a search engine.

WinBoard_F can run on a PC under any 32-bit or 64-bit version of Windows. It requires less than 2MB of disk space, and 16MB of memory. The board size can be adjusted to fit on almost any resolution screen, and it could even work on a monochrome monitor. By today's standards, it is tiny! Which is good, as it has to leave something for the engines, which might put a much heavier demand on your hardware.

WinBoard_F is under active development, so the versions you download might be beta, or even alpha versions. It seems to run reasonably bugfree, at the moment, though.

WinBoard_F is being developed by H.G. Muller. Questions and remarks about WinBoard_F can be added as comments to this page, which he visits as often as he checks his e-mail.