Who said that a chess-variant board should have even dimensions?

Tamerlane II uses a 11 x 11 board. Why not going a step further with the odd number 13? This is the starting idea governing this chess-variant.
An odd game should be different. That is its nature. Then, the army at fight in this game presents men which have not or seldom been used in my other games, despite they have a familiar style which make them easy to familiarize for the new players.
As it might be expected, there are 13 types of pieces in this game. Several of them have a long three-square distance effect which is perturbing. The atmosphere at play is weird. It is just fantastic.

You can play Fantastic XIII on-line here with Game Courier.

There are 30 pieces in each side: 1 King, 2 Snakes, 2 Ships, 2 Hawks, 2 Mammoths, 2 Cheetahs, 2 Squirrels, all of them on the 1st row of each player; 2 Trolls and 1 Prince on the 2nd row, another single Troll on the 3rd row and 13 Pawns forming a complete line on the 4th row.
That sums to 10 types of piece in the setup. But three types of men may appear by “elevation”: Saber-tooth, Eagle, and Rhinoceros. In total, they are 13 different types of pieces. 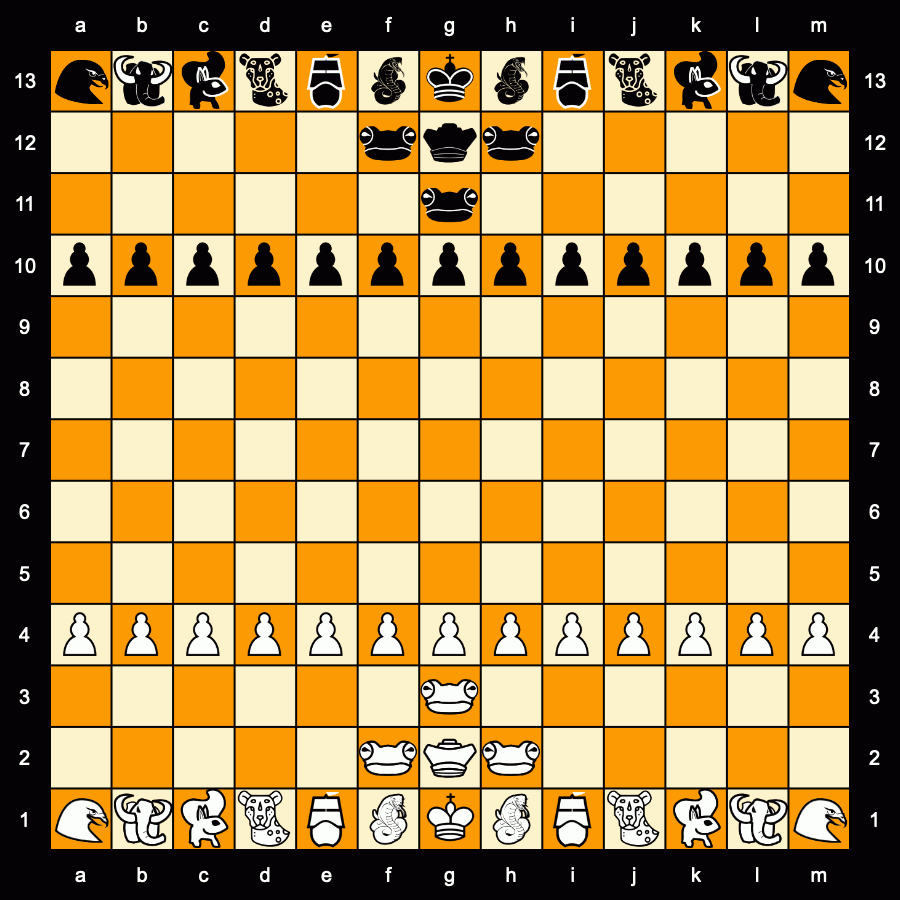 There is no castling in Fantastic XIII. On its first move, the King may jump to a free square at two squares' distance. For instance, from f2, it can jump to d1, d2, d3, d4, e4, f4, g4, h4, h3, h2 or h1). It does not matter if the square jumped over is occupied or not; however, the jump is forbidden if that intermediate square is threatened by an enemy piece. When jumping like a Knight, at least one of the two intermediate squares must be free of threat (e.g., if jumping from f2 to h3, either g2 or g3 must not be under attack). The King's jump is not permitted if the King is in check. This rule, which was once prevalent in medieval European chess, replaces castling. Identical to Metamachy. 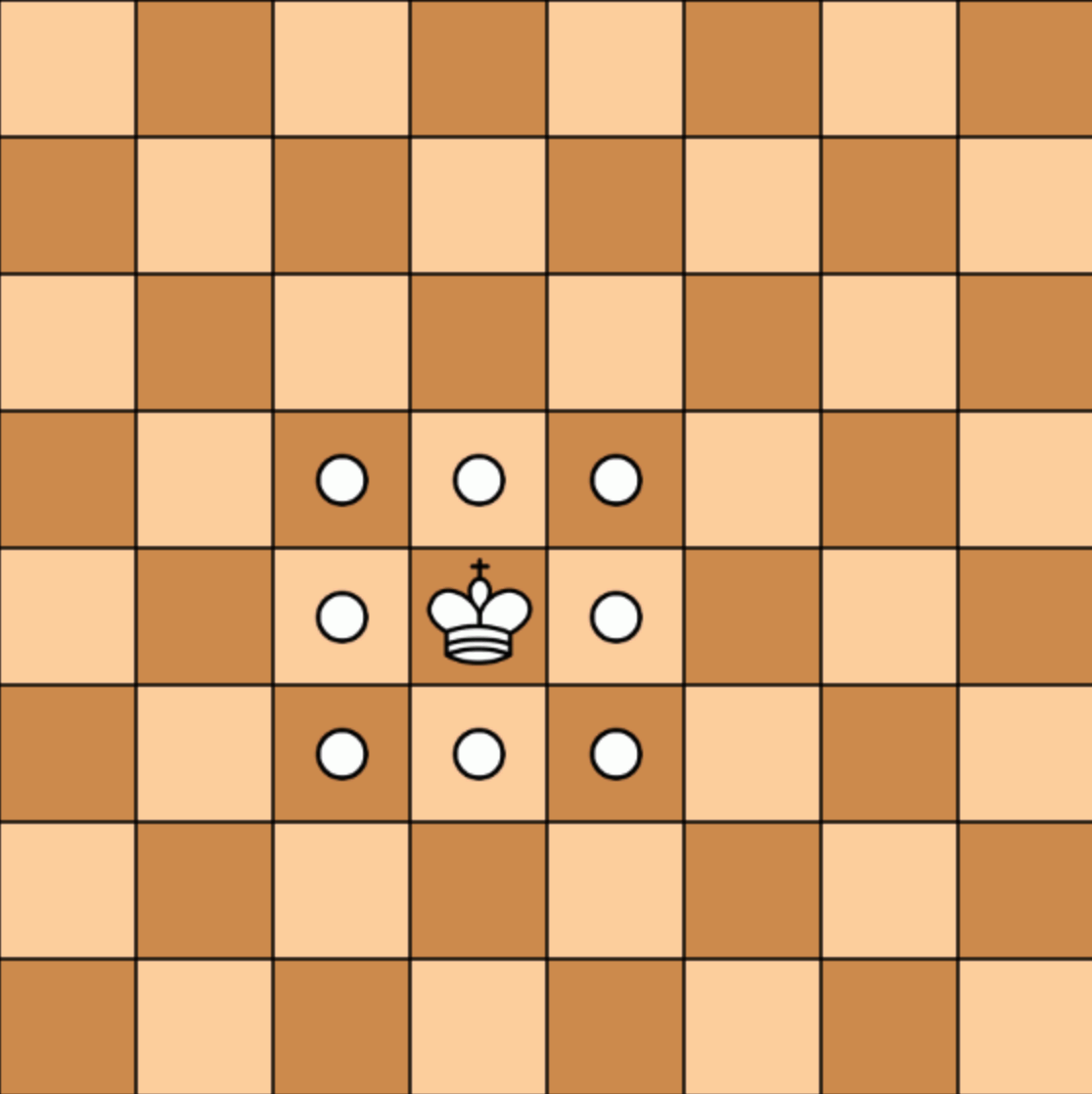 Snake: it moves one square vertically and then, slides away of an indefinite number of squares diagonally. It can not jump and the unobstructed path must start with the vertical movement. The Snake is the counterpart of the Ship. Both pieces are constrained bent-riders because the vertical direction is favored compare to the horizontal one in the definition of their moves. (The name of this piece comes obviously from its move in shape of snake's tongue, an idea inspired from Eric Silverman and Ralph Betza). 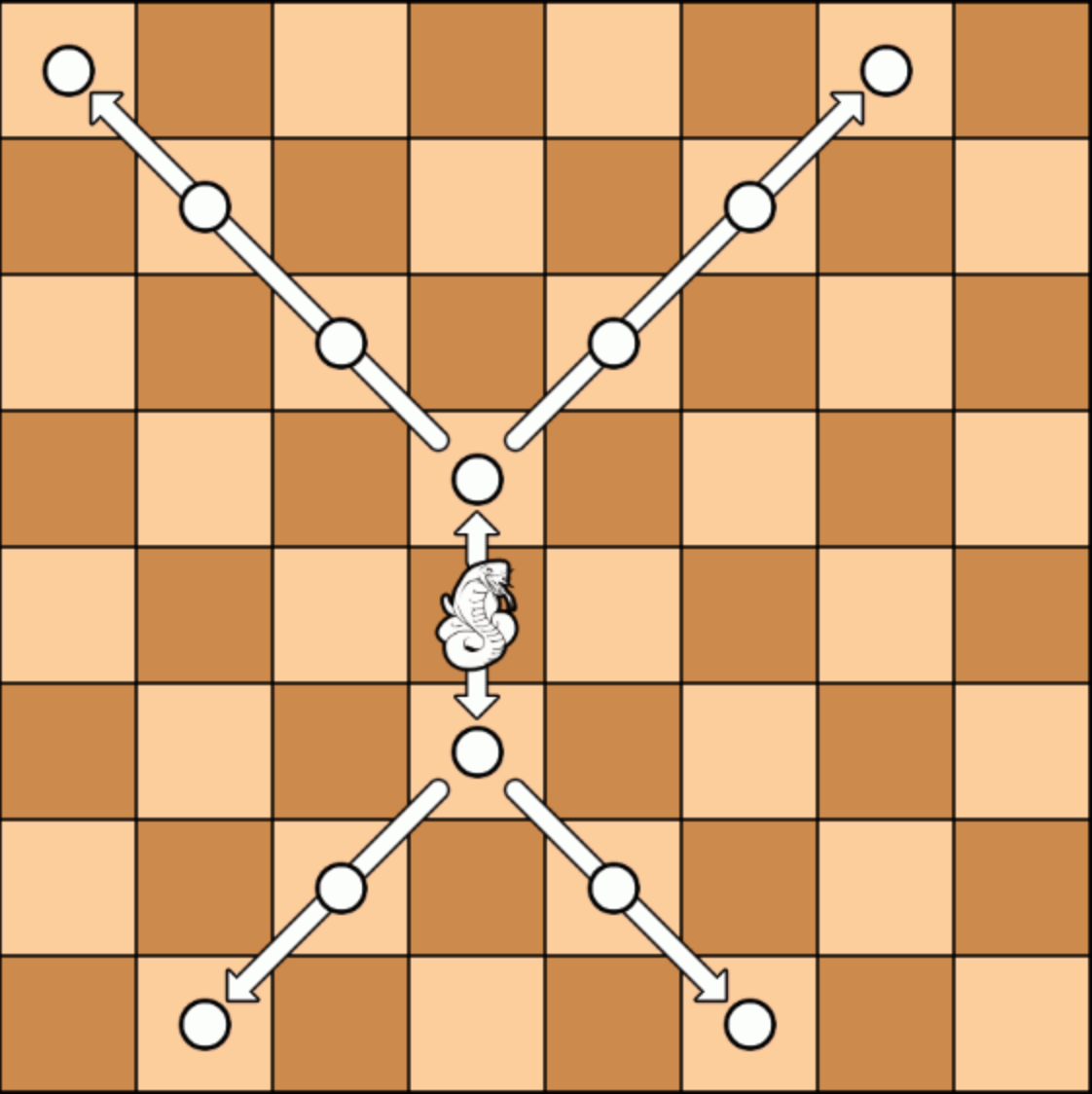 Ship: a piece also used in Tamerlane II. It moves one square diagonally and then, goes away of an indefinite number of cases vertically, never horizontally. It can move one square diagonally only. It can not jump and must begin its move with the diagonal step. The Ship is more limited than the Eagle (which can move horizontally, see below). Nevertheless its move power is between the Rook and the Bishop. 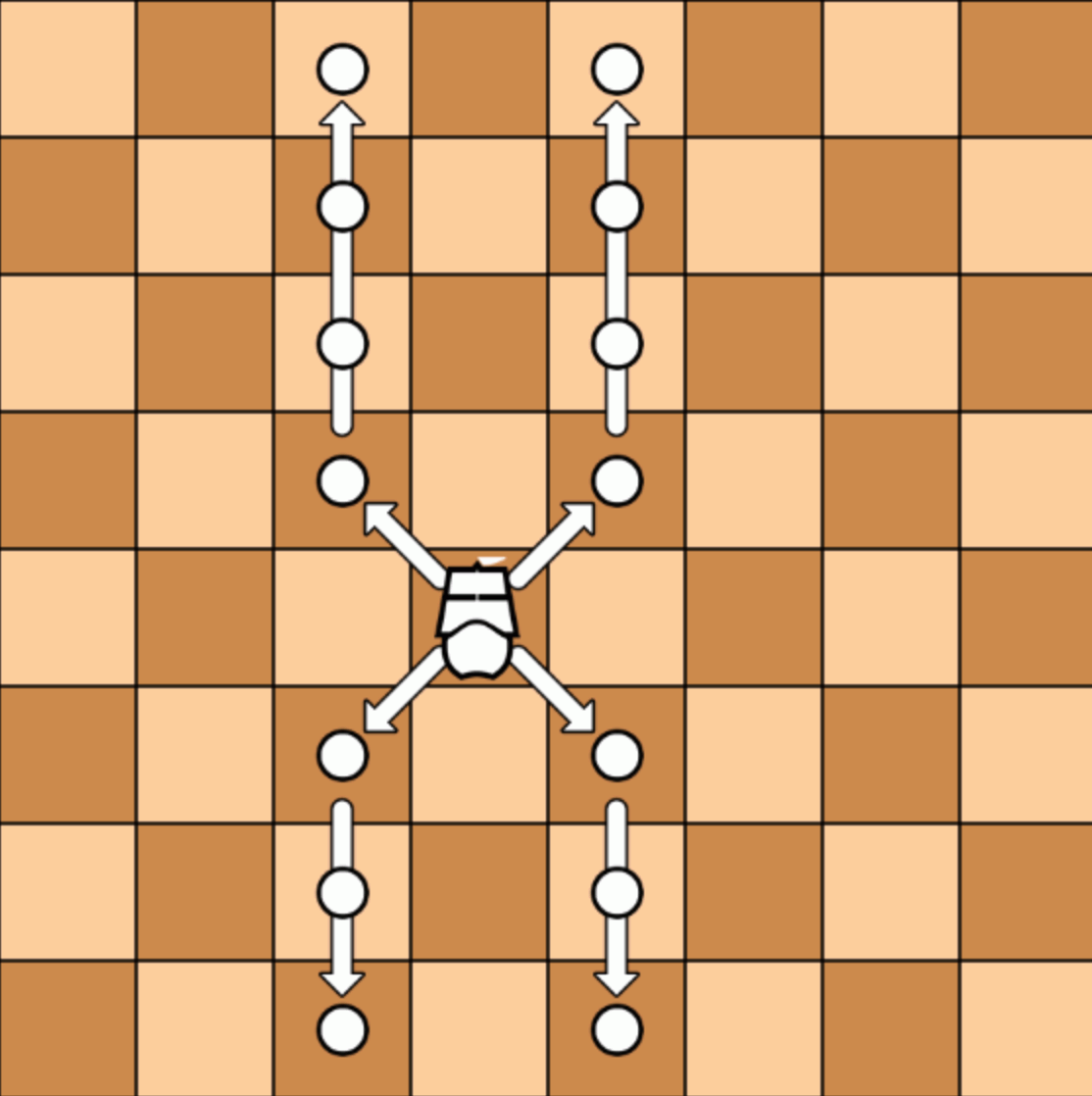 Hawk: it jumps horizontally, vertically or diagonally two or three squares, leaping over the intermediate squares if they are occupied. (A piece invented for Musketeer Chess). 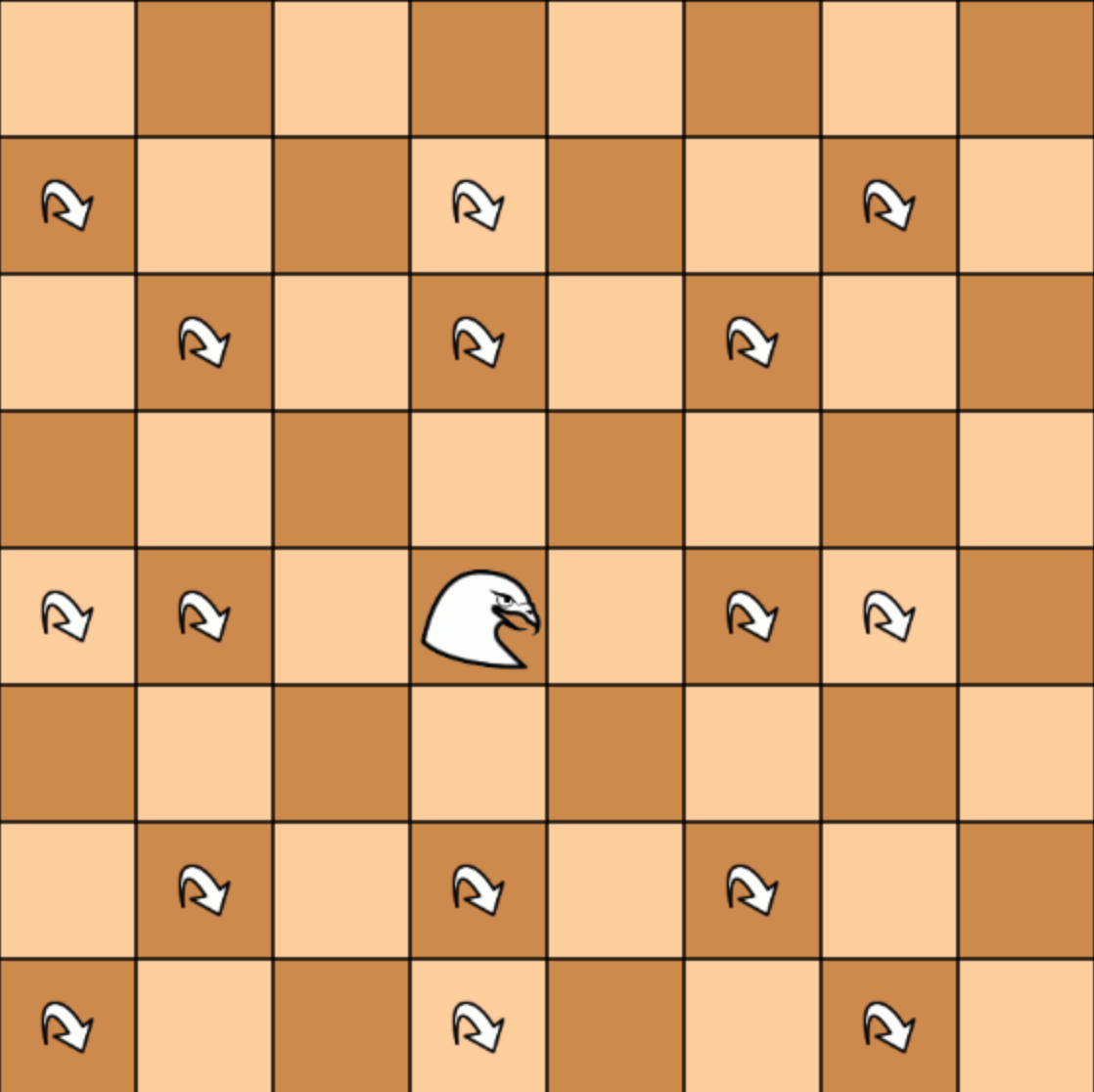 Mammoth: it steps horizontally, vertically or diagonally one or two squares, leaping over the intermediate square if it is occupied. (This piece was first proposed as  a Pasha for Paulovits Game in the 1890s and was used as Mammoth or Mastodon by Mats Winther). 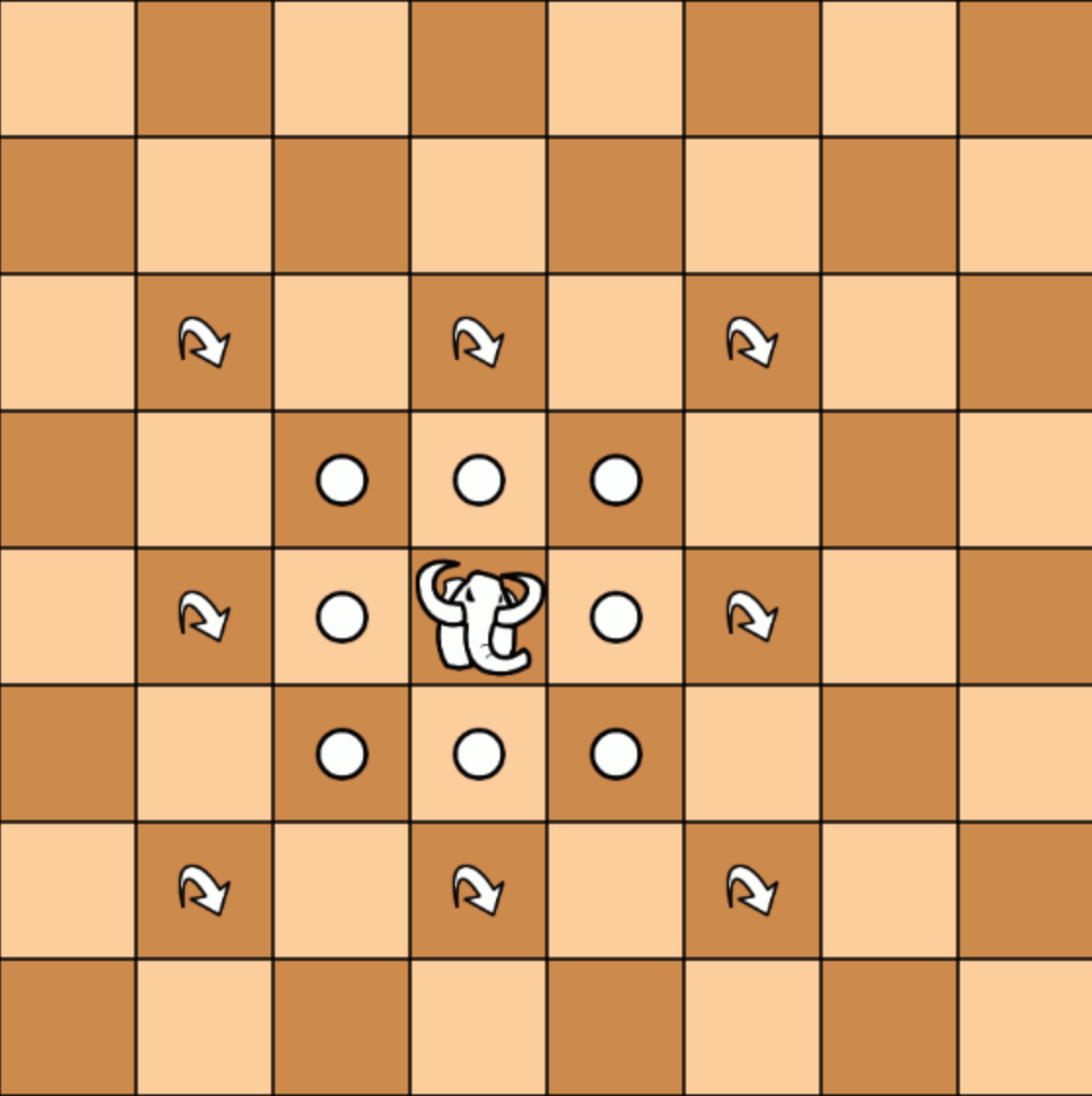 Squirrel: also a compound piece that jumps as a Knight or jumps at 2 squares, diagonally (like an Alfil) or orthogonally (like a Dabbaba). 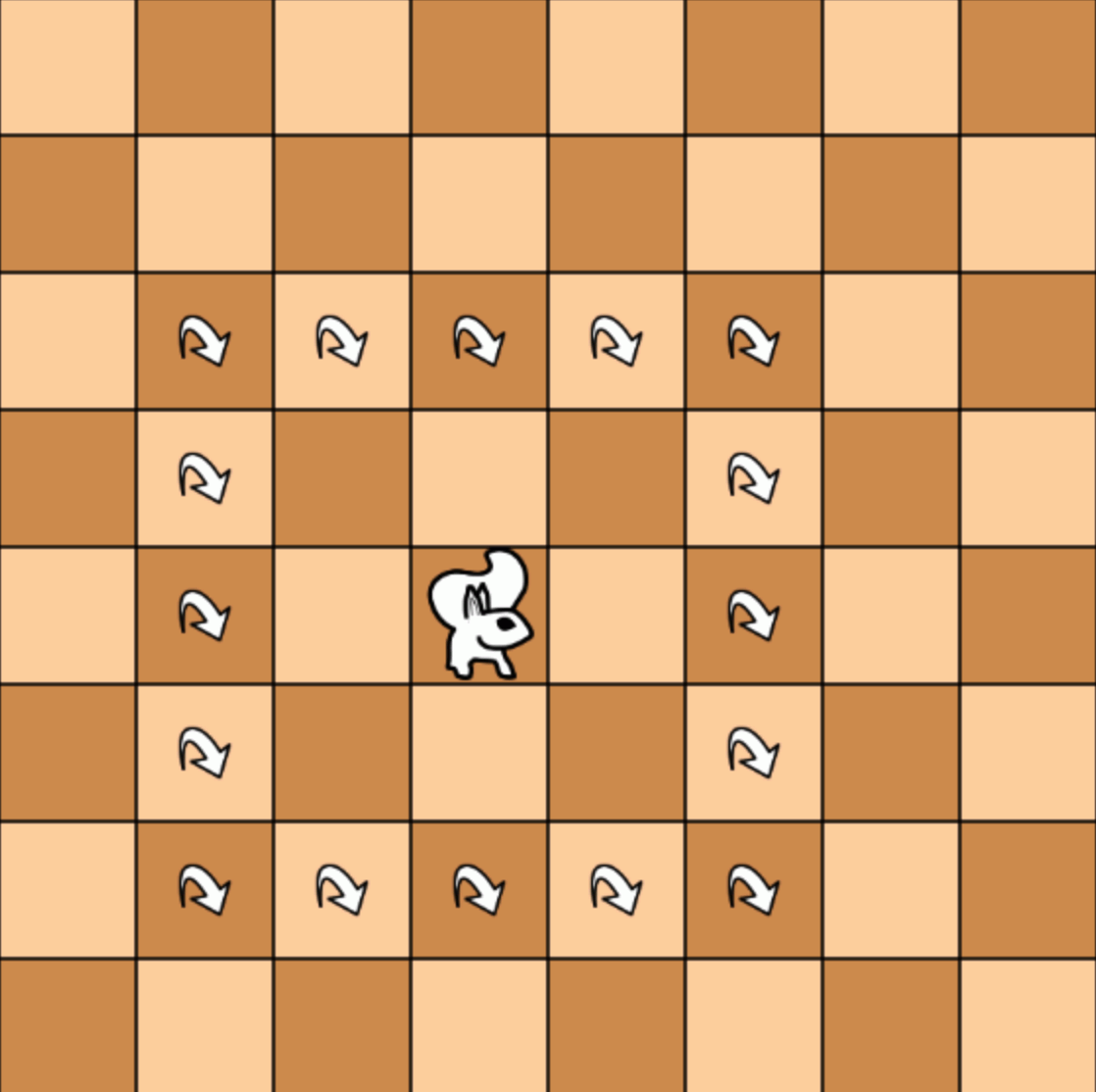 Cheetah: it is another "ring" leaper which jumps on any square situated at 3 squares distance from where it stands. (This piece was such named first by Eric Silverman). 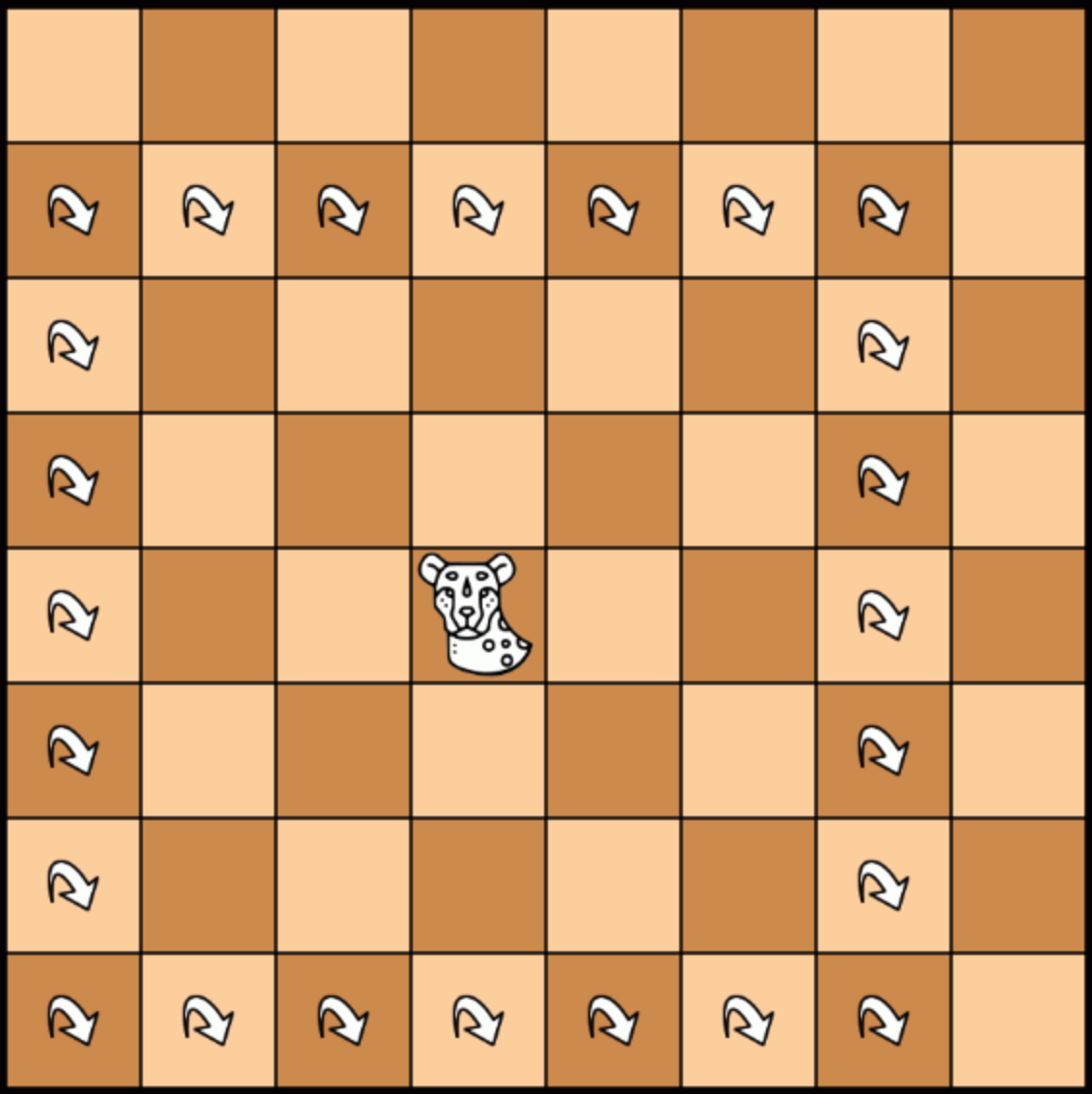 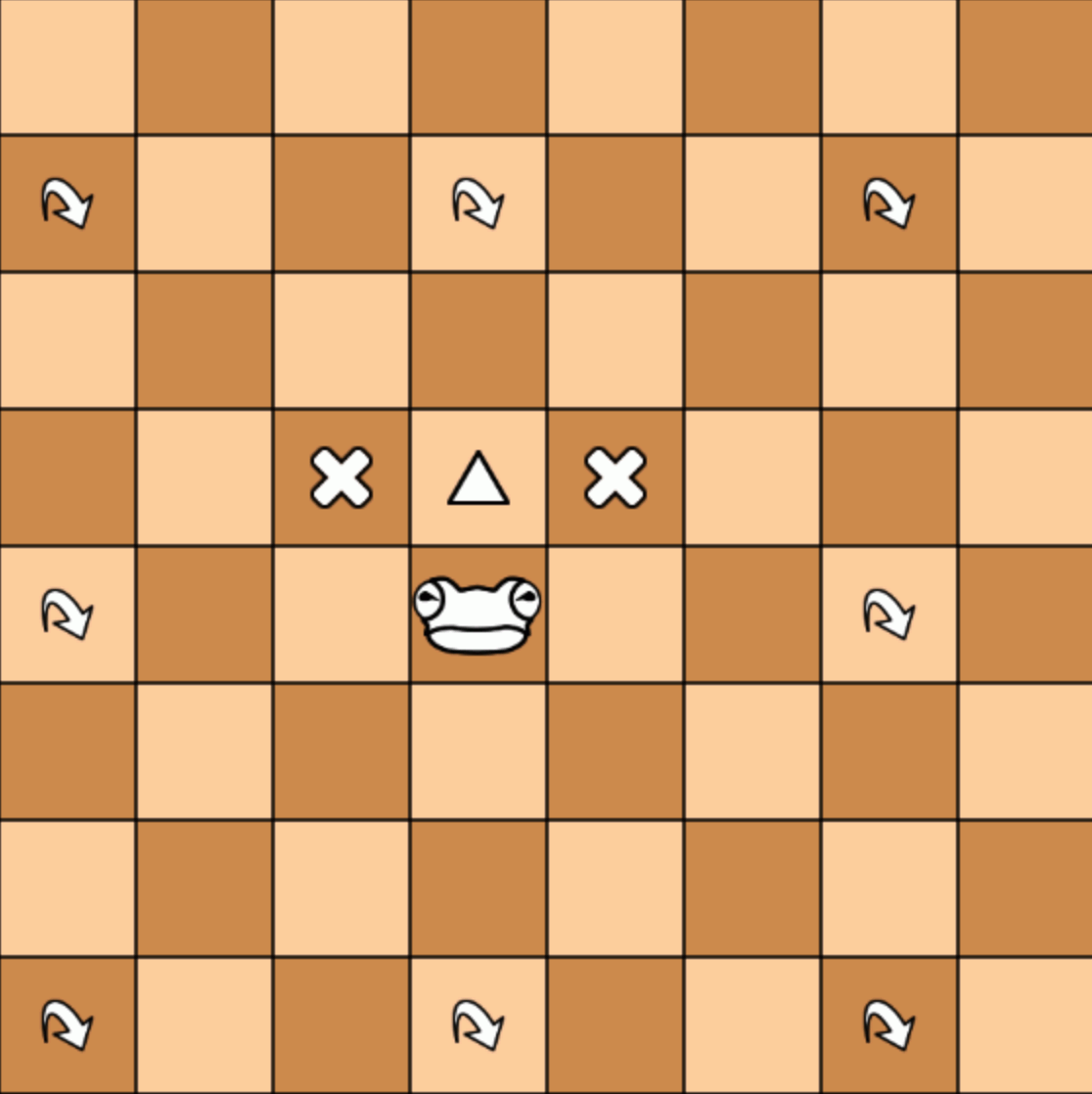 Prince: a non-royal King who moves and captures one square in any direction, but without being hindered by check. It has been inspired by medieval games like the "Man". Like the Pawn, he can also move without capturing to the second square straight ahead. Identical to Metamachy. 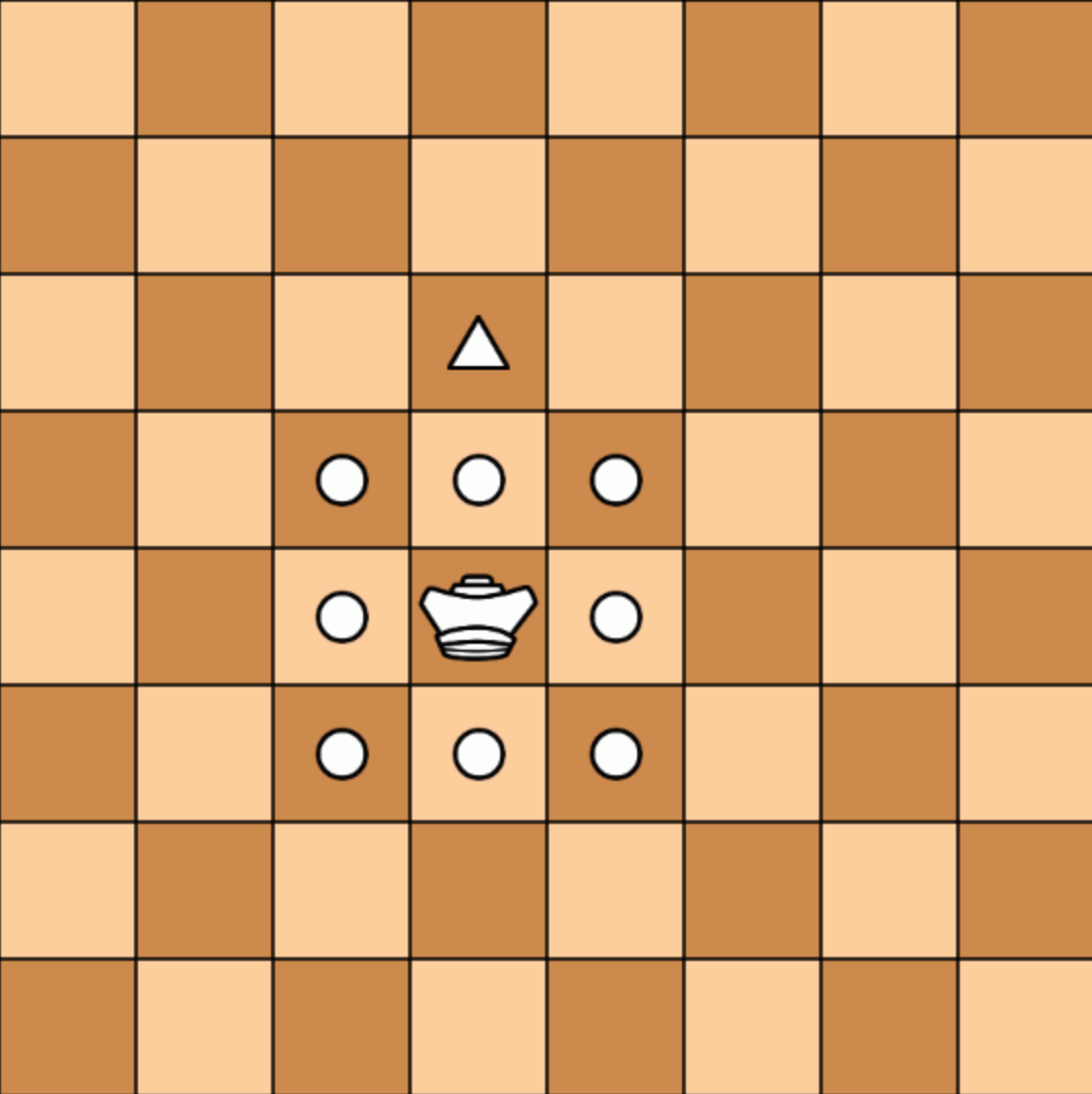 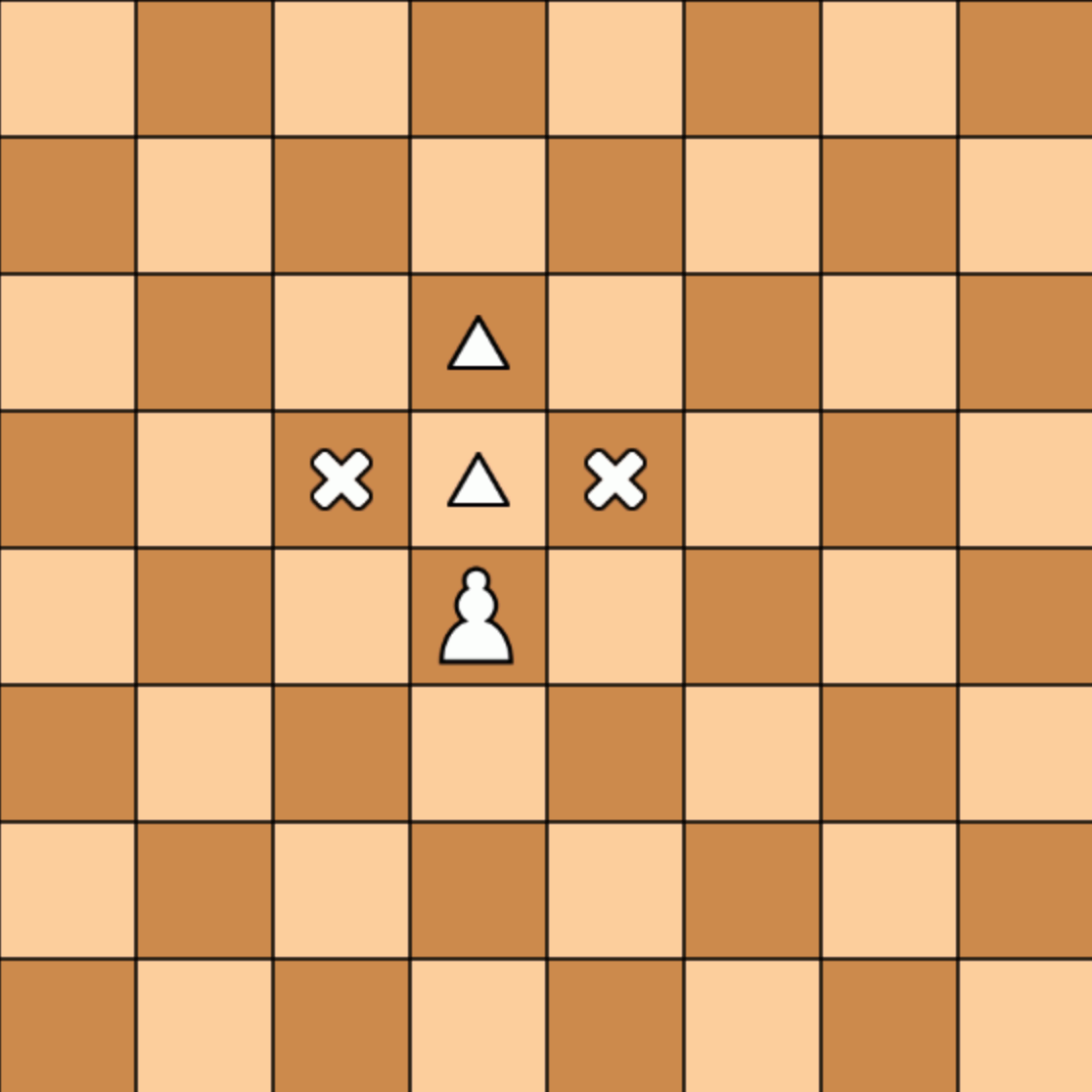 Three pieces are not present on the initial setup but may appear during the game by promotion:

Eagle: This piece may appear in this game by promotion of a Ship.  It moves one square diagonally and then, slides away of an indefinite number of squares vertically or horizontally. It is authorized to go only one square diagonal. It can not jump and the unobstructed path must start with the diagonal movement. This piece is almost as powerful as a Queen and is inspired by the Giraffe from Tamerlane's Chess and the Aanca (a mythical giant bird preying elephants, mistaken for a gryphon) from Alfonso X's Grande Acedrex. Identical to Metamachy. 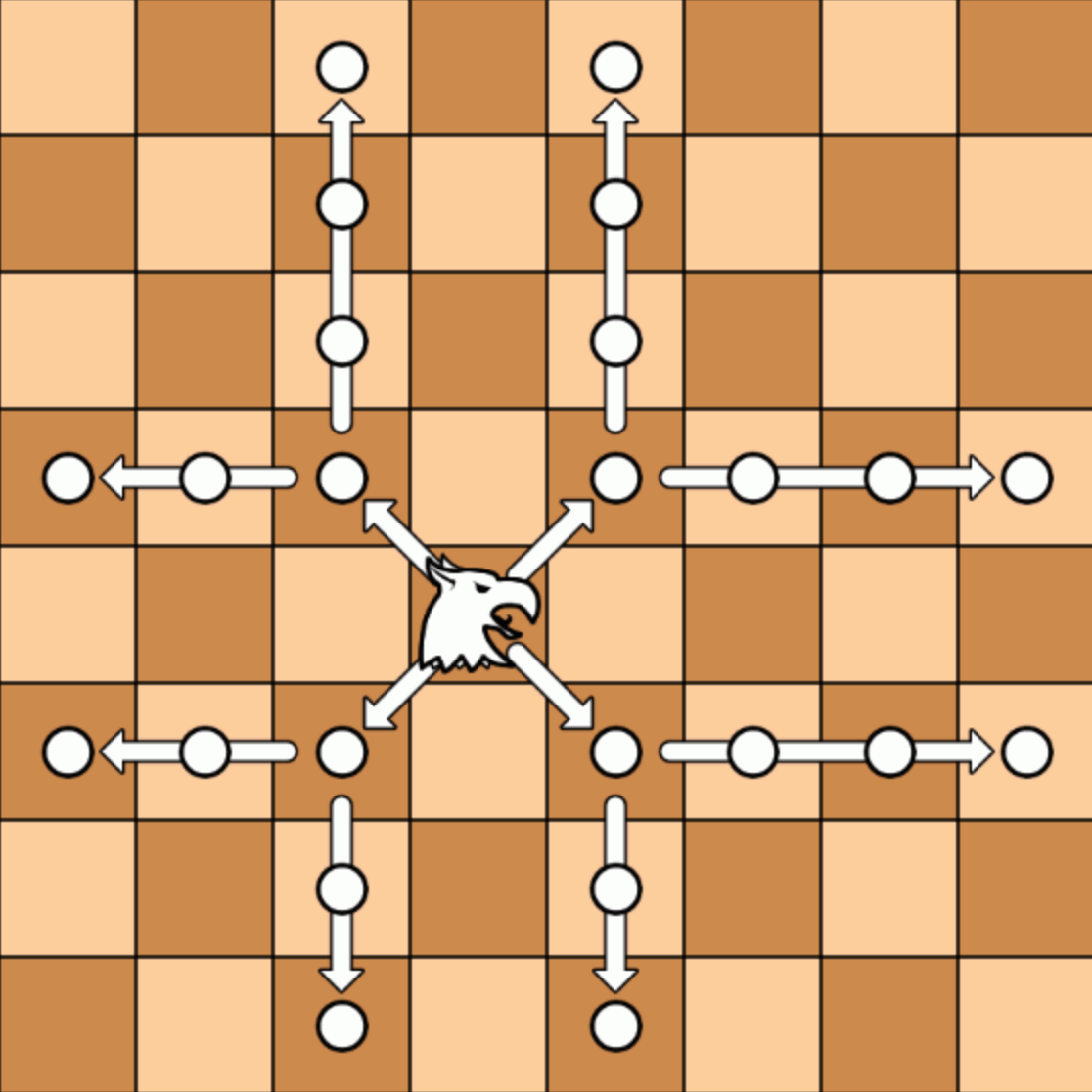 Rhinoceros: This piece may appear in this game by promotion of a Snake.  It moves one square vertically or horizontally and then, slides away of an indefinite number of squares diagonally. It is authorized to go only one square in line or column. It can not jump and the unobstructed path must start with the orthogonal movement. This piece is inspired by the Unicorn of mediaeval Grande Acedrex. It is a counterpart of the Eagle. Identical to Zanzibar-Maasai Chess. 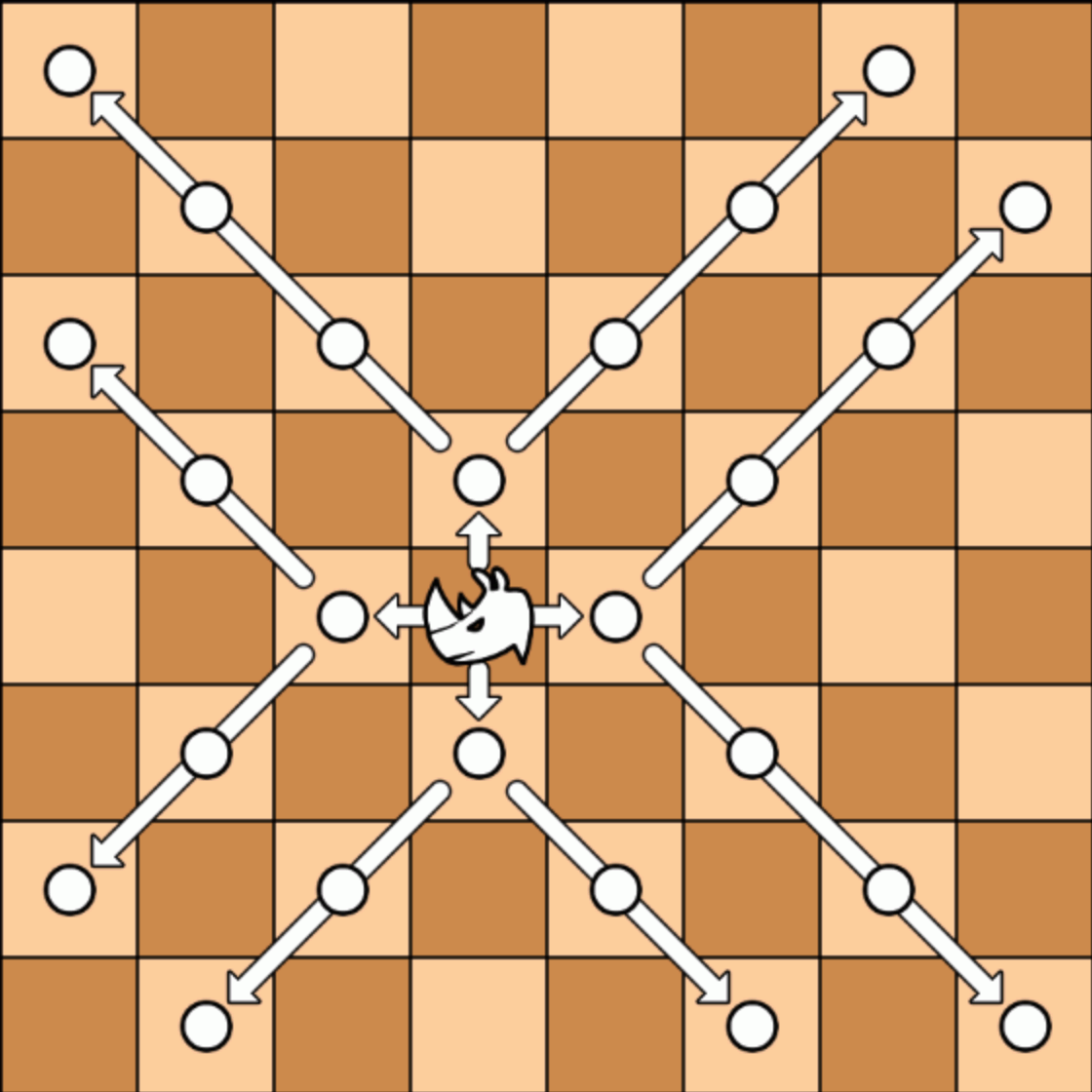 Saber-tooth (Tiger): This piece may appear later on by promotion of a Pawn, a Prince  or a Troll.  It  jumps on any square situated at 2 or 3 squares distance from where it stands. The Saber-tooth is a “double-ring” leaper: it combines the powers of the Squirrel and the Cheetah, meaning that it can leap at any square at two or three-square distance from the square where it stands. It is the most powerful piece in this game. 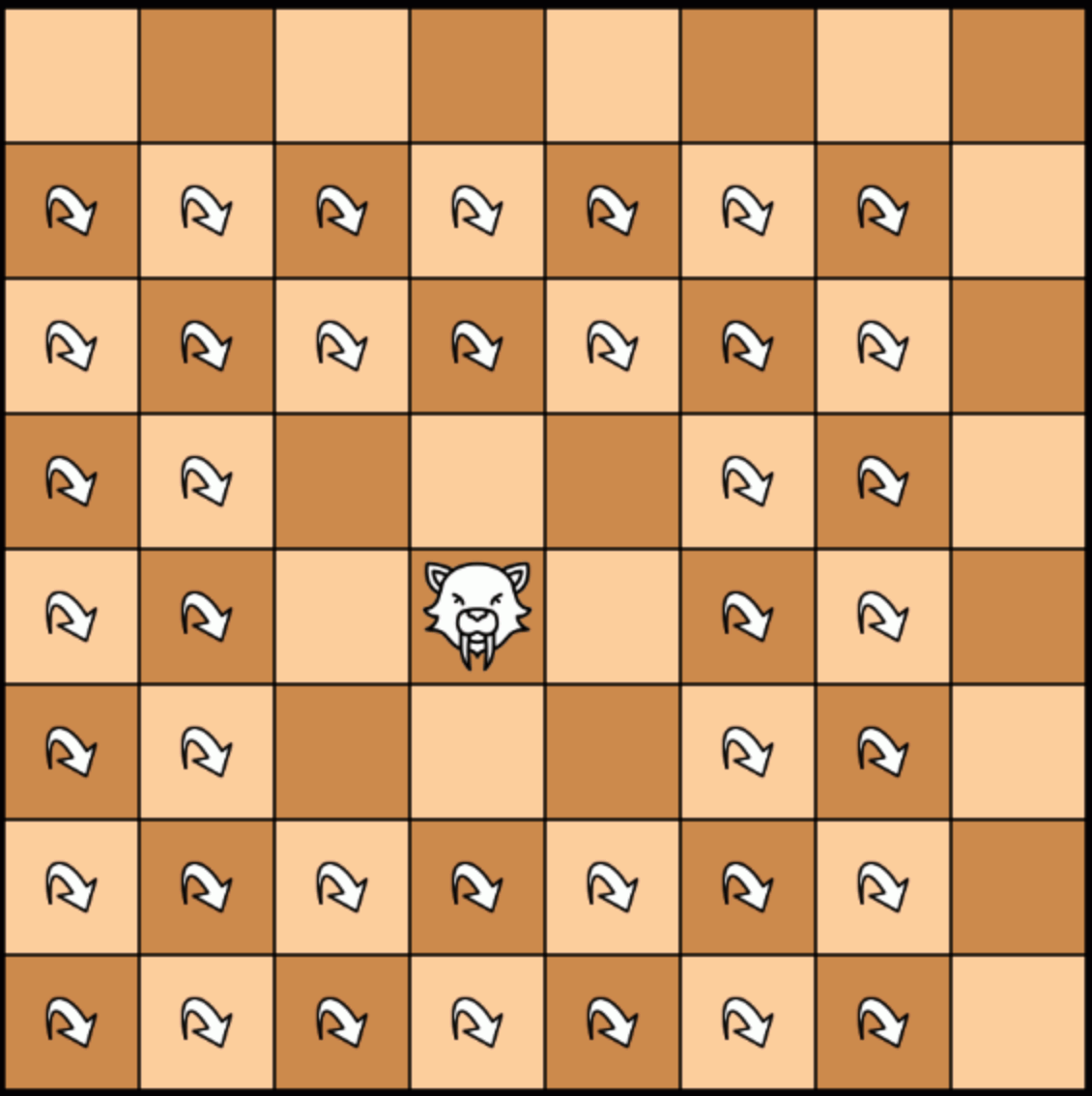 Pawn and Prince Promotion: A Pawn or a Prince reaching the last rank of the board is immediately replaced by a Saber-tooth. Promotion to any other type of piece is not allowed.

Ship and Snake Promotion: These two pieces promote to Eagle and Rhinoceros respectively on last row, which is a manner of completing their powers for a uniform move in all directions.

End of Game: The end-of-game rules, checkmate, stalemate, etc., are identical to standard chess. The goal is to checkmate the opposing King.

These values are computed with the Play-test applet, which is available below.

(The diagrams on this page are made with the help of the Musketeer's chess painting tool, thanks to Zied Haddad and Jérôme Choain)