This page is written by the game's inventor, Adam Goss.

I found the Chameleon Chess variant created by Wolfgang GroÃŸkopf and Ivan A. Derzhanski. I was intrigued by the design, but I found the rules much too complicated, and the four-player goal seems to be little more than attrition. So I've tweaked the concept somewhat, for both 2 players and 4 players. 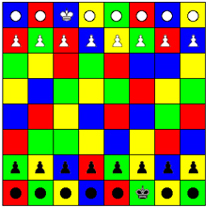 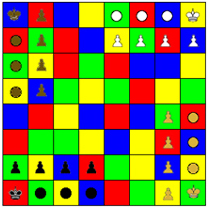 The board is an 8x8 grid in four colors: red, blue, green and gold. The pattern is the same one used by Wolfgang GroÃŸkopf and Ivan A. Derzhanski.

For two players, each player has a King, eight Pawns, and seven Chameleons. Each player sets up the Pawns in the usual places. The Chameleons and King take up the other row. The King occupies the third square from the right, regardless of what color that square is (the orientation of the board is not important when setting up). For four players, each player has a King, four pawns and three Chameleons. Each player situates his King in the left corner, with the three Chameleons to the right of it. The Pawns go in the next row in front.

The Chameleons take on the properties of Rooks, Knights, Bishops and Queens depending on what color squares they are on: Red = Rook Blue = Bishop Green = Knight Gold = Queen (A handy way to remember these assignments is the following: "R is for red, R is for Rook; B is for blue, B is for Bishop; Green is the Green Knight and Gawain; Gold is the color of the Queen's crown.") So when a Chameleon is on a red square, for example, it acts as a Rook and continues to act as a Rook until it lands on a square of a different color, at which point its identity and movement changes. The change only happens when the Chameleon stops moving. Kings are always Kings as in normal Chess--they move one space in any direction and are the target of the opponent(s) for Check/Checkmate. Pawns are exactly the same as in normal Chess, including the option of the initial double-step (and taking en passant if this rule is observed by the players). In the case of four players, Pawns may move forwards and sideways, and may capture diagonally forwards and diagonally backwards. They may never move or capture in a direct backwards direction. When a Pawn reaches the edge of the board (either in 2-player mode or 4-player mode), it gets promoted to a Chameleon and acts in accordance with the color of the square it is on. There is no castling.

I believe this arrangement is simpler than previous versions of the concept, and I've already test-played it with several people. They have all said that it presents an enjoyable challenge. The board layout is the one invented by Wolfgang GroÃŸkopf and Ivan A. Derzhanski. I do not know if they had any strategic significance in mind when they created the pattern. The only strategic point *I* had in mind was the positioning of the King: Each side of the board has three squares devoted to one color, 2 squares to another color, 2 squares to a third color, and the last square for the the color. Depending on the orientation of the board when players set up (for the 2-player version of the game), each player has in his home row the potential for three of a kind - three Queens, three Knights, three Rooks or three Bishops. The third square from the right is always one of these triplet-producing colors, so it seemed a good idea to reduce these triplets to just pairs by occupying the 3rd-from-right square with the King. Having the King means the goal of the game is no longer simply attrition of opposing pieces (although some attrition will still happen, as test-playing has shown me). This means that each player, in 2-player mode, has 2 of one kind of piece, 2 of another kind, 2 of yet another kind, and 1 of the last kind, plus their King. Since the orientation of the board is not deemed important, this means that every game can be slightly different, with players having different starting advantages and disadvantages any time they happen to change the board's orientation. For example, in one starting orientation one player will have only 1 Bishop and the other player will have only 1 Knight. Rotate the board 90 degrees, however, and suddenly one player has only 1 Queen and the other has only 1 Rook. Since the Chameleons change their identity frequently, however, any advantage or disadvantage from the start of the game can change as well. For example, one could conceivably wind up being in a position at the end of a given turn with four Queens, but this advantage could be lost on the very next turn should one of the Chameleons occupying a gold square move to a square of another color.