Battle of the Six Armies

I have a fascination for unusual boards â€“ that is boards that do not use squares to indicate piece positions. There are three regular two-dimendional shapes that tile the plane, namely the square, the hexagon, and the triangle. Far and away the rarest shape used for board games is the triangle.Â  Also comparatively rare are chess variants that cater for more than 2 players.Â  This variant attempts a combination of both rarities.

This is shown in the next two images below. 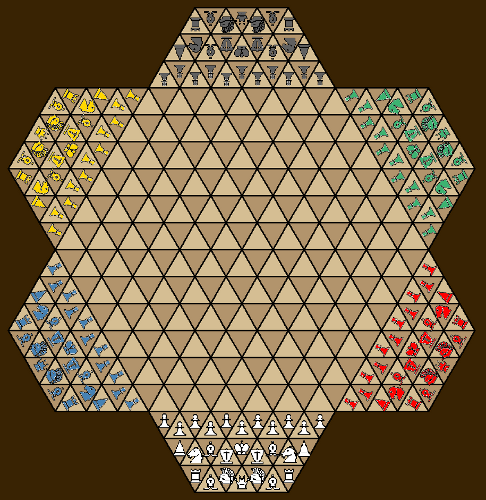 The legal moves for each piece are illustrated in the images that follow.Â  It should be noted that:

The pieces and their moves are given above.Â  Other rules generally are as for FIDE chess except that the aim is to capture all enemy Kings: there is no check or checkmate.Â  Any army that has its King captured is removed from the board.Â