This page is written by the game's inventor, Peter Aronson.

Jumping Chess was the winning entry in the contest to create a chess variant with 100 squares. In this variant, captures are not made by replacement, but instead are made by jumping over a piece, as in Checkers/Draughts. The standard orthodox chess array is used, but in order to avoid uncapturable pieces at the edge of the board, two extra ranks and two extra files of edge squares are added. These edge squares can only be entered as the result of a capturing jump, and pieces sitting on them are obliged to capture if possible. 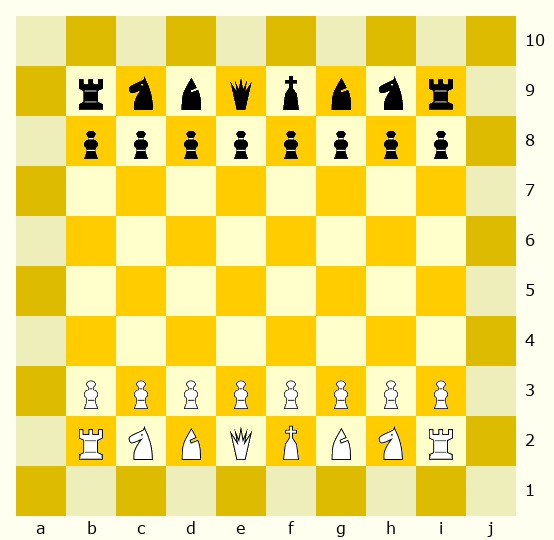 All pieces move as in orthodox chess, but the method of capture is different as described below.

The rules of Jumping Chess are identical to those of orthodox chess, except when noted below. The primary change is that pieces capture by overtake — that is, by jumping over them. Pieces are captured by an enemy piece jumping over them and landing on an unoccupied square past the piece being captured (except for the Knight — see below). Only a single capture may be made per turn, and, except for the Knight, you may neither jump over one of your opponent's pieces without capturing it, nor jump over a friendly piece at all. All capturing moves must land on a square; thus, it is not possible to capture a piece on an edge square if the capturing move would result in the capturing piece attempting to land beyond the edge of the board.

A Pawn captures by jumping two squares diagonally forward, over an opposing piece, and landing on the square diagonally past its target. For example: 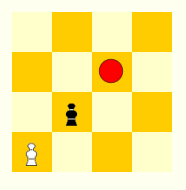 The white Pawn could capture the black Pawn by jumping over it to the square marked with the red circle. If there was a piece, either friendly or otherwise, on that square, the capture could not be made. A Pawn can capture another Pawn that is making an initial double move en-passant as in orthodox chess if there is not a piece occupying the square in which the capturing Pawn would to need to land.

Knights capture by moving in a normal Knightwise manner. There are always two squares adjacent to both the Knight's starting and ending squares: a Knight may capture a piece belonging to the opponent on either one of these squares (but not both). For example: 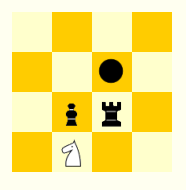 The white Knight could capture either the black Pawn or the black Rook by jumping to the square marked with a black circle. The Knight is not required to capture any piece it jumps over.

The Bishop captures like a Queen in International Draughts, except that it may only make a single capture per turn. It moves diagonally until it reaches the target piece, leaps over it, then lands on unoccupied square some distance in the direction of movement beyond the piece captured. For example: 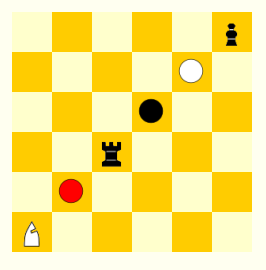 The Rook captures like a King in Turkish Draughts (Dama), except that it may only make a single capture per turn -- in other words, like a orthogonal Bishop. It moves up, down, left or right until it reaches the target piece, jumps over it, then lands some distance in the direction of movement beyond the piece captured. For example: 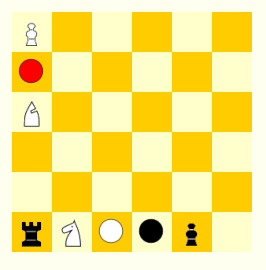 The King captures like the Queen, but may only capture adjacent pieces, and must land on the first square past the piece captured in the direction of the jump.

Only a capturing move may end on one of the 36 edge squares. A player with a piece on an edge square that has a possible capture (even a pawn with an en-passant capture), must make that capture, even if it results in their King being captured. Consider the following example: 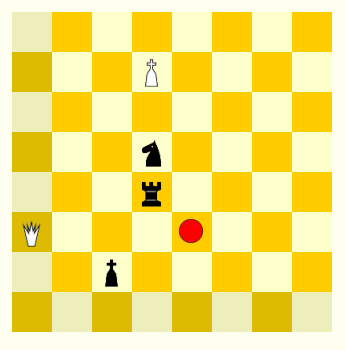 It is black's move and the rest of the board is empty. White's Queen is on an edge square. If black moves their Knight to the square marked with the red circle, then white is required to capture it with their Queen, allowing black to capture white's King with their Rook.

If a player has more than one possible capture by a piece or pieces on edge squares, it is the player's choice which capture to make.

Pawns promote upon reaching the rank that their opponent's King started on (2 or 9), or the rank of edge squares behind it (1 or 10). This includes both files of edge squares (a and j) on both of those ranks. Pawns may only enter those promotion squares that are also edge squares by making a capturing move.

Because the object of this variant is to capture your opponent's King instead of to checkmate your opponent's King, some of the restrictions on castling no longer apply: you may castle when in check, through attacked squares, and even into check. All other restrictions on castling (neither the King nor the Rook may have been moved yet and the squares between them must be empty) remain.

The Knight has become a short range piece in this game, roughly equivalent to the King. It may be desirable to make it more powerful by increasing its captures: instead of a Knight having the option of capturing either or neither of the up to two opposing pieces adjacent to both its starting and ending squares, in this subvariant it may capture neither, either or both.

Instead of limiting pieces to a single capturing jump, we could imitate Checkers/Draughts and allow as many jumps as the player can find captures. The result of this rule would to make the resulting game much less like orthodox chess. A Queen could really do a job on a Pawn line!

Instead of being allowed to land on any open square past the piece being jumped, Bishops, Rooks and Queens must land on the square immediately past the piece taken. This should make guarding pieces by threat of counter-capture easier, perhaps making the game more like orthodox chess; however, combined with the ability to protect pieces by placing them into lines or rectangles, this may make capture too difficult, leading to a static game.

This allows play on a regular Chess board. Rules are identical to the above, except you start with the setup for a six by six Chess Variant, such as Los Alamos Chess, Lilliputian Chess or Diana, and add two ranks and two files of edge squares to bring the board up to eight by eight.

It is possible to play Jumping Chess with object being to checkmate rather than to capture the opposing king, but it is then necessary to add the following rules defining the interaction between the edge squares and check:

A piece on an edge square that has a possible capture, must make that capture, with the following exceptions:

The King and the Knight have similar attack patterns in this game, being able to capture any adjacent piece, unless other pieces block the squares to jump to, or the target piece is on an edge square and the square that would have to be jumped to in order to make the capture is off of the board's edge. The Knight however, is harder to block, and is the only piece that can ever attack pieces on edge squares without being on an edge square itself (but pieces on the corners can not be attacked at all).

Checkmate was eliminated to avoid having complex rules describing the interaction between the forced jumps for pieces on edge squares, and the requirement to relieve check (see subvariant (6) Checkmate, above for such rules). This also has the nice side-effect of potentially making the game easier to implement for Zillions of Games.

The edge squares were added to the board in order to avoid pieces hanging around edges and corners to avoid being captured. The requirement that they only be entered as part of a capturing move was to avoid them becoming a place to flee to in turn, and the must capture rule was added so that even if pieces do end up on edge squares, they still can be lured out and attacked. The game of Shatra (an interesting Chess-like game with jump capture) avoids the edge problem by making capture obligatory at all times, as in Checkers/Draughts. This is a workable approach, but I was trying to preserve a bit more of the flavor of orthodox chess.

Having the situation where the your opponent is unable to move (stalemate) be a victory is another feature borrowed from Checkers/Draughts. Using the usual orthodox chess rule that such a situation is a draw seemed to fit badly with the "feel" of Jumping chess (although, given that it is legal to move your King in into check, actual stalemates should be vanishingly rare in Jumping Chess). Another possible way to handle the situation would be to forbid it: a player is not allowed to make a move that would leave the other player without a legal move.

Thanks to Jens Markmann for his helpful comments and suggestions.

Chaughts. A cross-over game between International Draughts and Chess, Chaughts uses capture by jump with multiple jumps, but only against adjacent pieces (except for the Knight, which can capture pieces a Knight's move away). Game by Mark Hedden, Web page by David Howe.

Cheskers. Another cross-over game between Checkers and Chess, Cheskers combines capture by jump with capture by replacement. Web page by Hans Bodlaender.

Shatra. A game from Altai in Russia that combines Chess pieces with Checkers-like capture (including captures being obligatory), a special board with a fortress at each end, and drops of pieces from out of the fortress. Web page by Ivan A. Derzhanski.

Peter has written a ZRF file for playing Jumping Chess with Zillions of Games. You can download it here: