This page is written by the game's inventor, Вадря Покштя. This game is a favorite of its inventor.

Battle of the Kings

An extremely interesting chess variant developed by me to create chess compositions. Each player starts the game with only eight pawns. After each move, the chessboard is gradually filled with pieces.

Standard chess setup, except that there are no chess pieces on the first and last rank. 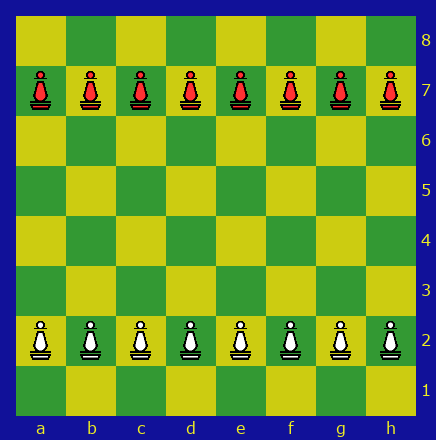 Standard Chess rules, except as follows. Every time a piece moves from its square, then a new chess piece appears on that particular square, following the simple order P>N>B>R>Q>K Thus, after a pawn move on the square where it stood, a knight appears. After the knight's move, the bishop will appear on the square from which the knight moved and etc. And only when the king moves, the appearance of a chess piece does not occur. The appearance of the King on the square where it is threatened with check is unacceptable. This means that if your Queen is under attack, then you will not be able to deflect it from the blow, since the King will appear in the place where the Queen is. A player wins the game when he/she checkmates his/her opponent's king (s). To win, it is enough to checkmate one King. A check to kings is considered checkmate if at least one of them is unable to escape from this check. A stalemate is a win for the player delivering the stalemate. The player made a move leading to a repetition of the position (which is only possible if there are kings on the board) losses. There is NO DRAW in this chess variant. There is no castling.