This variant is named after one of the many rivers sharing the Humber estuary. Among my series of River+university+cathedral variants, it is the second to be set in Northern England.

A strong influence is Irwell, which this variant complements in many ways. As the Aire flows through Yorkshire it represents the other side (a) of the Pennines and (b) in the Wars of the Roses, so I include the Rose as promotee - but not, with no Lewis Carroll connection, in the array. The section of river represented is in metropolitan West Yorkshire, which contains Britain's only contiguous group of three districts with city status. Only in Leeds, most populous of the three (and second only to Birmingham in the British Isles), does the river reach the city centre. In the 1970s, however, the cities were extended north and east, deep into what had previously been suburbs. Bradford was extended to straddle the Aire upstream, and Wakefield to do so downstream, of Leeds. The parts of camps representing these cities are set further back from the River than usual for a board of this size. Because in Leeds the university is north of the Aire, camps are split with some White and some Black pieces starting each side of it.

Pieces representing the cities follow the usual rules, with royalty added where they can fit. Bishops appear on the outer files as Leeds has no Anglican cathedral and is in fact split between Bradford, Wakefield, and Ripon dioceses, the last having its cathedral outside the metropolis. Marshals, aka Chancellors, appear on the Bradford and Leeds sections but not the Wakefield ones, reflecting the university locations. This leaves no room for royalty in Bradford, so I distribute these pieces between Leeds and Wakefield. Balancing the strongest pieces, and especially Rook moves, means putting the Queen on a Wakefield file, but this is fitting as it was much smaller than the other to before the enlargements, and as such regarded as the most genteel.

As this variant's setting has the same halfway-to-Scotland property as Irwell's, I retain the Steward as immediate Pawn promotee. I do not however include it in the array, or its special powers, as these are not relevant to Yorkshire. 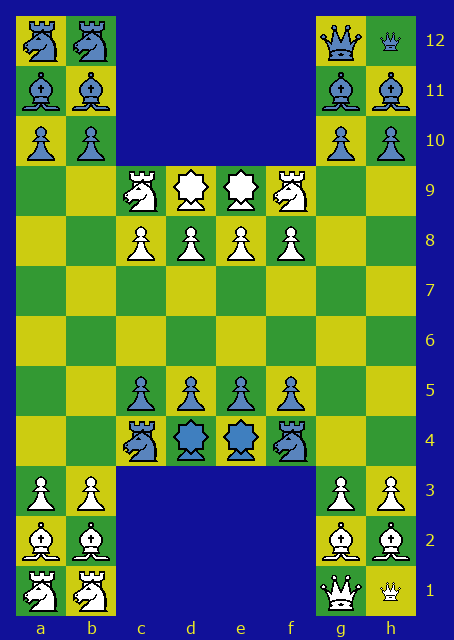 Players are initially restricted to moves starting or ending their side of the River. Playing order is the White player nearest the White Queen, then the opposite Black player, then the remaining White and Black players and so on.

Pieces cannot move through the board's four concavities. In other words a Marshal's Knight move and each leap of a Rose move must be within a complete 6-square rectangle, and each step of a diagonal move between opposite corners of a complete 4-square supersquare. Consequences include:
1 file a and h Pawns and file b and g Pawns are not En Prise to file c and f Marshals;
2 conversely, file c and f Marshals are not En Prise to file b and g Pawns;
3 file a and h Bishops take at least 3 moves, and file b and g ones at least 2, to reach files c-f.

Pawns starting on the outer pairs of files have an optional double-step intital move. Those starting on the middle 4 files do not. As in Irwell and Wey there is a further bar on Pawns capturing enemy Pawns moving in the same direction - although they can capture enemy Pawns when crossing the River and can capture other enemy pieces in the usual way. Pawns crossing the River, whether capturing or not, become Stewards. Stewards can capture unpromoted enemy Pawns En Passant, though only of course by moving within files a-b or g-h. I decided to allow this because Stewards are still divergent and this variant has no Stewards except those resulting from Pawn promotion.

Should a player get a Steward to any of the four corner squares, it can be further promoted to a Rose, with the restriction that a team can have only one Rose at any time. When a player whose team has a Rose moves it, it cannot be moved again until that player and, if still in the game, their partner have each moved another piece.

A player with no legal move (including ending with a royal piece on their half of the board) drops out of the game. All that player's turns are subsequently missed. Their partner, if still in the game, gains total control of the army with the Princess becoming a Queen and any remaining unpromoted Pawns Stewards. This strengthening is some compensation for the army moving only half as often as before. As with Avon and Irwell the form of partnership is suggestive of the card game Bridge. The game ends when both an army's players drop out of the game.

This variant can be played with varying amounts of communication allowed between partners. For example, you might allow an opinion to be expressed on a partner's initial proposal for a move but not on any change of mind. It can also be played with wins and losses for teams or individual players. In the latter case the player whose move ends the game ranks first and the first player to drop out fourth. Two players still playing an army when Checkmated score joint third if the other two players are still playing, otherwise joint second.

Aire is playable using two FIDE sets distinguishable by size, with (large/small) Pawns for Steward/Pawn (as Pawns are promotable to Steward), Queens for Queen/Princess. All Rooks can represent Marshals, both Kings Princes, and all Bishops themselves. No substitution is needed for mass promotions when a player takes control of their entire army, as such promotion is obvious from the partner dropping out.

If the idea of promoting Pawns to Stewards rather than Wazirs proves popular, I may include it in earlier variants of this family.

Although minority religions have many adherents in the area (notably Islam in Bradford and Judaism in Leeds) this variant makes no attempt to reflect this. This is because it is part of a series of variants in which the established Anglican church is the only religious element portrayed. There are not even any Catholic Bishops in the series! Other religions I have been covering in other kinds of variant.

Just as Cheshire and Lancashire originally meant the territories of the Earl of Chester and Duke of Lancaster, so Yorkshire was that of the Duke of York, also for many centuries a title within the royal family. This adds to the ways that in which Aire ties in with its western neighbour.

When first planning a Yorkshire-based variant I considered including the more northerly river Wharfe and calling the game WharfeAire - a pun on what Chess in general represents! Eventually I rejected this as the Wharfe is, by and large, on the northern edge of that metropolis and does not even touch the Wakefield district.

As of December 2010 the Church of England was considering merging the Bradford, Ripon, and Wakefield dioceses in order to have a single diocese cover the whole of Leeds. In August 2014 this process was completed. This does not however affect the game as this kind of variant is set not in the present day but during the Cold War, before England's many polytechnics became additional universities.

By a curious coincidence some of my earlier pages received useful comments posted by a contributor surnamed Bradford in the run-up to my posting this variant. It just goes to show.