The Nightrider is one of the two most popular fairy chess pieces by chess problemists. It was given the name by the famous British chess problem composer T. R. Dawson, appearing in his book Fairy Problems in 1925. According to the Oxford Companion to Chess, however, the piece was actually invented in 1907 by W. S. Andrews. The technical name for the piece is Knightrider, but nightrider was already a meaningful English word, making it a more suitable name for the piece. 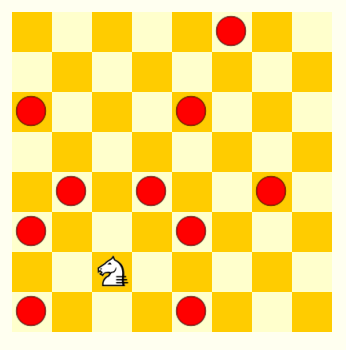 Note that e.g. d4 must be empty for the nightrider to be able to go to e6.

The Nightrider is a Knight-rider. A rider is a piece that can repeat the same type of leap in a single direction — until it captures a piece or its next leap would be to an occupied space. The Nightrider repeats the Knight's leap in a single direction. It may continue leaping like a Knight in one direction until it captures a piece or is blocked from further leaping. Although the Nightrider isn't used in standard Chess, that game has three riders of its own. The Rook is a Wazir-rider, the Bishop is a Ferz-rider, and the Queen is a compound of these two. As a Wazir-rider, a Rook repeats the single-space orthogonal leap of a Wazir until it is blocked from moving any further. Likewise, a Bishop repeats the single-space diagonal leap of a Ferz until it is blocked.

Click on an image to view the full piece set it belongs to.

This is an item in the Piececlopedia: an overview of different (fairy) chess pieces. Written by Fergus Duniho and Hans Bodlaender.
Updated by Greg Strong. WWW page created: 1998-10-30.
WWW page updated: 2020-12-21. ﻿