Jonathan Alden informed about a three dimensional chess variant, brought to the market by a company named Dynamic Games in the 1970's, called Strato Chess. The game is copyrighted 1973, and has three eight by eight boards boards aligned above one another. The original game had the boards made of lucite, and the armature which holds them a stainless steel S curve. The pieces may move down and up on the boards (as well as the usual forward and back).

Michael Bruno informed about this game: The rules with the set he has have John N. Hanson Co. Inc. listed as the manufacturer (in California). They are copyrighted 1978.

We do not know if the company that sold the game still exists, and the game may be out of sale for quite some time. Anybody who has more information on this game please send an email.

Yes, I owned the set described on one of your pages. The "S" curve Strato Chess set. It was great. Of course the board was so small and the pieces so light that is was difficult to use. Any bump would knock the pieces over and ruin the game. I've since build my own 3D board (8 x 8 x 3) and use the same rules that came with the Strato Chess Board.

Every piece moves 2 dimensionally like they do on a regular board so the only challenge in learning the new rules is to turn their normal move 90 degrees to the "Z" axis. My new board handles up to a 4" weighted king since I used pine and glass. 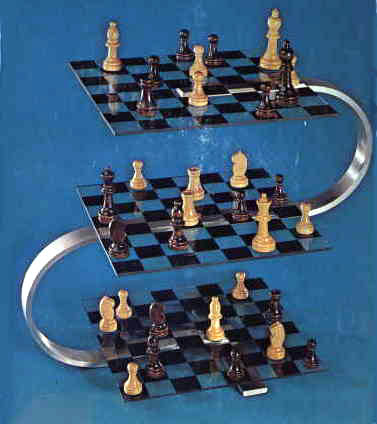