The Consuls is played on a 8x8 board like orthodox chess with two King pieces instead of a King and Queen like Two Kings Chess, but with Pawn promotion rules from Platonic Chess (description below).

Pieces in The Consuls move as they do in Orthodox Chess, except for Pawn promotion, which is described below.

A Pawn can capture as a King, Bishop, Knight, or Rook in addition to its original moves upon reaching the enemy side:

The ranks given above are from the point of view of the promoting player.

A promoted Pawn in the 5th rank, though it can capture like a King, is non-royal and can be captured like any other piece.

When a promoted Pawn moves away from the enemy side (5th to 8th rank) by capturing as a King, Bishop, or Rook backward, it reverts to a regular Pawn.

Either King can castle with the Rook on its side. The final positions of the King and Rook are the same as for Kingside castling in orthodox chess.

The game is won when either King is checkmated.

When the Kings are forked by an attacking piece that cannot be captured in the next move, the game is won since the two Kings cannot be moved away from check at the same time.

A fork checkmate can only be prevented by capturing the attacking piece.

When the Kings are skewered by an attacking piece that cannot be captured in the next move and there is no way to block the skewer attack, the game is also won since both Kings cannot be moved away from check simulateously.

The ancient Roman Republic had two equally powerful heads of state called Consuls, which is the insipration for the name of this chess variant.

Play with the ChessCraft Android App

The Consuls have lost their army and are now fighting in a gladiatorial arena. 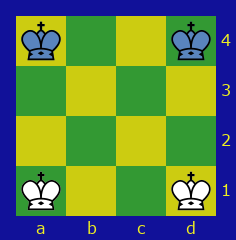 The Arena is a 4x4 board with two Kings on each side. Each King's moveset is determined by the rank it is on:

The King piece can move passively as a King in all ranks, but its capture ability depends on the rank it is on as given above, from the point of view of the promoting player.

The game is won when either King is checkmated.