This page is written by the game's inventor, Daniel MacDuff.

This is just a little idea I had. Originally it was going to use licensed heroes but I switched to more generic ideas and had more fun, I think. Make that variant if you want. I enjoy this better. There are a few basic assumptions I took into account about superheroes: There are many types of superhero, all variations on a few themes- Strongman (Hulk, the Thing) Night Hunter (Batman the Dark Knight, Green Hornet) Friendly Neighborhood Hero (Batman and Robin, Spiderman) Ãœberpowered (Superman, Green Lantern) Overly Smart (Professor X, Tony Stark) Also, heroes that have sidekicks are way cooler than their sidekicks. Their sidekicks do save their lives sometimes, but are mostly just a watered-down version of the hero. If you were to replace one with another, you'd never notice. Thus the founding principles of this game were formed.

Pawn- Sidekick- Like all good sidekicks, these are nothing without heroes. Their powers vary depending on their mentors (non-pawns orthogonally adjacent to them). They also reduce their mentors' weaknesses and help them fight without these debilitations. Rook- Rockin' Rook- A strongman through and through, Rockin' Rook moves just as the FIDE Rook. However, being superstrong, he can push up to 3 pieces, friend or foe, in a line. Alternatively, he can push any orthogonally adjacent pieces 1 square away from him on arrival. Both of these are optional, but he cannot do both in a turn. He carries no weapons so he cannot capture by displacement. He instead pushes enemies off the board as described to capture. His weakness lies in his might: he slips one square to the edge of the board each turn. His sidekick is Rookie Mistake, who moves as a leaping rook and captures by displacement. When Rockin' Rook is adjacent to his sidekick, the edge slipping is reversed- he slips to the center instead. Knight- Nightrose- He is a creature of the night. As his name may imply, he moves as a Nightrider or a Rose. However, fear of being discovered because of a really horrible mask causes him to be unable to move on light squares. His sidekick, Daylily, moves as a Knight or a Mini-Rose (a circular King). Daylily allows his mentor to make the same move that Daylily himself uses when on a light square, Bishop- The Indigo Crusader- Don't be fooled! This shady character, though valiant, has a dark side. Despite his first move being that of a bishop, he flips after moving into a Crooked Bishop. After moving as a Crooked Bishop, he flips to a Bishop again, and so on. As you can imagine, this requires a costume change, so after flipping, he lays dormant, unable to move, capture, or give check, for 2 turns. He then reawakens as the new form. His sidekick, the Purple Pelican, moves as a Ferz, an Alfil, a Camel, or a Dababa. When next to his mentor, he reduces the flipping time to one turn. Queen- Inquediqueen- Oh, what a tale of tragedy! The strongest piece on the board (she moves as a queen, and then moves as a queen again, possibly capturing twice) also has the greatest weakness (She cannot pass or land by a sidekick). And that's not all! If adj. to an enemy sidekick, she moves one square away automatically. However, her sidekick (I know, ironic, right?) Inquedilad (who moves as a queen) allows her to capture the offending piece instead, assuming that it is not adjacent to another sidekick. King- Cephalus- The brainiest fellow on Earth (his name comes from the Latin word for head) is also very slow, moving as a mere king. However, after moving, he sends out a Maharajah Mind-Wipe, which reduces all non-Sidekicks in the move area of a leaping Amazon into sidekicks, and causes all sidekicks in said area to change sides. Alas, the enemy Cephalus casts an equal shield, so pieces a leaping Amazon away from both are unaffected. His weakness is the simile to that of an FIDE King- He must move from check. No other pieces can intervene because of his hero complex. His sidekick is Hippocampus (the part of the brain responsible for memory). Hippocampus moves as the sidekick of the piece just moved by the opponent, or, if a sidekick just moved, as that sidekick. If the sidekick has more than one power, he can use any. If the enemy Cephalus or Hippocampus just moved, the player takes the last piece that he himself used, and so on for more. Hippocampus gives his mentor the ability to flip any checking piece(s) an Amazon away from him, but not from the enemy.

Sidekicks gain powers when orthogonally adjacent to a mentor. They lose the powers when they leave. The same goes for the powers they grant their mentors. Rockin' Rook slips to the nearest edge (or center space). If he is equally distant from two, he slips diagonally toward the edge. Light squares are those that the white queen starts on (those on the right bottom corner of the board). Are those all the clarifications I need? Comment me if you don't understand something. Check is very hard to catch in this game. if you discover it after the fact, don't sweat it. Cephalus didn't notice it either. Sidekicks cannot promote.

Try using the weaknesses of the Rook and Queen to create some interesting pins and checks. I'm talking better than XiangQi! This is largely unplaytested. Please note that this game requires basic knowledge of common fairy chess pieces, the definitions of and notes on which may be found in the piecyclopedia. Also, try and solve this devious puzzle. It will increase your knowledge of the game. 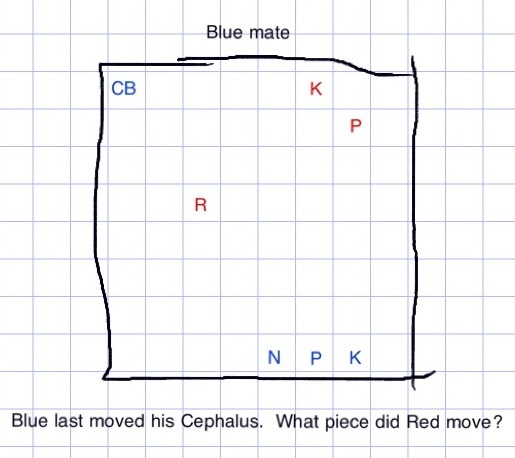