This page is written by the game's inventor, Rich Hutnik.

You can get a Zillions adaptation of Skirmish56 Chess in this package here:
http://www.zillionsofgames.com/cgi-bin/zilligames/submissions.cgi/38673?do=show;id=1591

This games uses an 8x7 chess board. Both pieces are placed in the last two rows of their respected sides. On an regular 8x8 chessboard, one set of pieces would be pushed up one row. The just abandoned row is not part of play. Players are suggested to cover up this row of squares to make sure they are not accidentally used.

Diagram of setup (Graphics by Zillions): 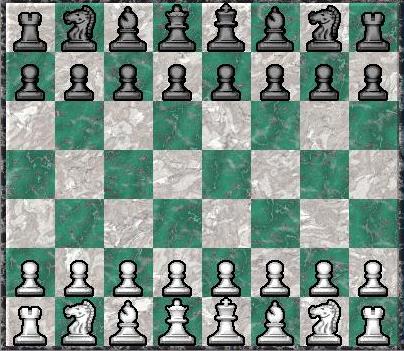 Same as in standard FIDE Chess.

Same as in standard FIDE Chess, except that pawns only move one row forward, and don't en passant. In addition, the board is reduced by one row.

This game is based on the rules of Tony Paletta for Skirmish Chess. It is placed on a board developed by John Kipling Lewis out of his work on Simplified Chess. The name, and the combination of the two, is by Richard Hutnik.