Platonic Chess is played on a 10x10 board. It consists of ten chess pieces based on the five Platonic solids, and a row of ten Pawns on the third rank. 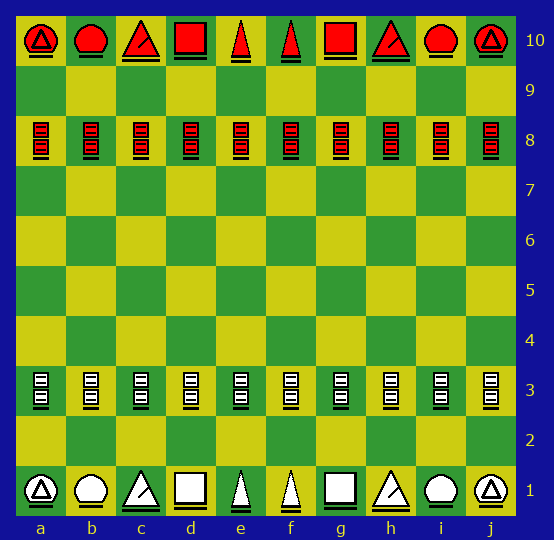 There are ten pawns at the third rank, and they move as in Orthodox Chess. 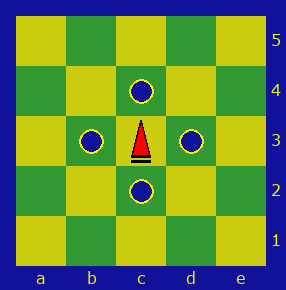 A Tetrahedron has 4 surfaces, so it can only reach 4 squares.

It is a royal piece like the King in orthodox chess, and can be put in check. 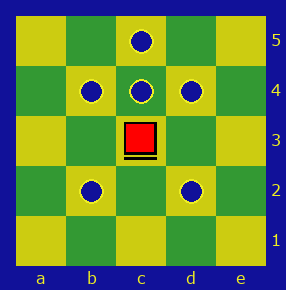 A Cube has 6 surfaces, so it can only reach 6 squares.

It moves one square diagonally like the Ferz and slides up to two squares forward. 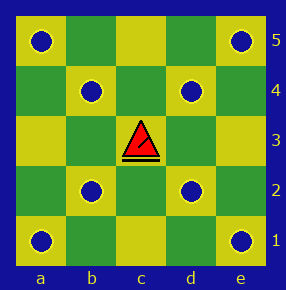 An Octahedron has 8 surfaces, so it can only reach 8 squares.

It moves diagonally like a Bishop , but only up to two squares. 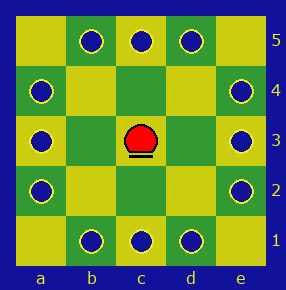 A Dodecahedron has 12 surfaces, so it can only reach 12 squares.

It has the combined moves of Knight and Dabbabah. 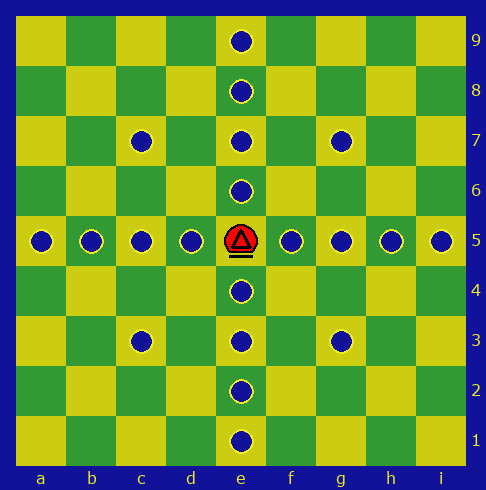 An Icosahedron has 20 surfaces, so it can only reach 20 squares.

A Pawn can capture as a Platonic solid piece in addition to its original moves upon reaching the enemy side:

The ranks given above are from the point of view of the promoting player.

The Pawn's additional capture ability is linked to the enemy rank it is on, and is not cumulative. A promoted Pawn can only move passively as a regular Pawn, and capture one square diagonally forward. It can also capture as one of the Platonic solids depending on which enemy rank it is on (see above). When a promoted Pawn moves away from the enemy side by capturing as a Tetrahedron backward, it reverts to a regular Pawn.

When a Pawn reaches the last rank, it can no longer move or capture forward. Its only legal move is to capture up to four squares orthogonally sideways or backward by sliding, or exactly two squares diagonally backward by leaping. Therefore, unlike in orthodox chess, pushing a Pawn to the last rank may not be the best strategy, and it could be advantageous to keep the Pawn in another rank on the enemy side, depending on the positions of the other pieces on the board.

A Tetrahedron can perform the castling move with an Icosahedron on the same side. The final position is the same as the positions of the equivalent pieces (King and Rook) after Queenside castling in orthodox chess.

The game is won when either Tetrahedron is checkmated.

When the Tetrahedrons are forked by an attacking piece that cannot be captured in the next move, the game is won since the two Tetrahedrons cannot be moved away from check at the same time.

A fork checkmate can only be prevented by capturing the attacking piece.

When the Tetrahedrons are skewered by an attacking piece that cannot be captured in the next move and there is no way to block the skewer attack, the game is also won since both Tetrahedrons cannot be moved away from check simulateously.

A skewer checkmate can be blocked by placing an intervening piece between a skewering Icosahedron and the Tetrahedrons. It can also be prevented by capturing the attacking piece.

The checker pieces can be stacked up to show that they are promoted when they are on the enemy side (see Rules section above):

Since checkers pieces can be used as pawns on the Platonic chess board, the chess sets are optional. If regular Pawn pieces are used, you can colour the board using highlighters to demarcate the five ranks on each side, keeping the Pawn pieces as they are when promoted. Their additional capture ability would be indicated by the different colours associated with each rank.

Play with the ChessCraft Android App