This game has several sources of inspiration: a chess book, a book about the Kabbalah, M. Winther's Shamanic Chess, the animal known as the ant-eater, and very possibly R. Wayne Schmittberger's Extinction Chess. I explain these aspects in the notes.

Object of the game is to capture all of your opponent's pawns (or have them lose a pawn via promotion) such that they have no more pawns; while maintaining at least one of your own. There is no check or checkmate. When you or your opponent has no pawns, the game is over. The Pre-set is: here 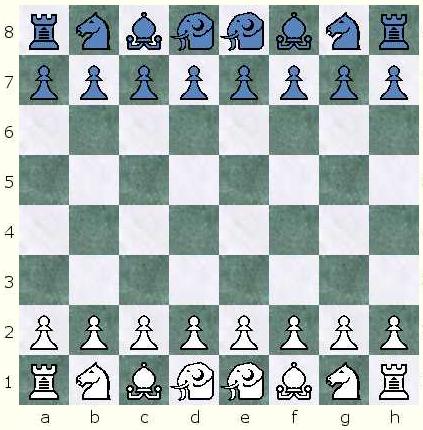 Pieces from left to right [also from right to left]:

Shamanic Rook (SR)- Moves and captures as does a Fide Rook. But it can, instead of making a rook move, go directly to any empty space that does not reside on either of your opponent's first two ranks. Example: A Shamanic Rook on A1 could move down an open A-file all the way to A8. Or it could move as a Rook to H1 assuming that row was open. If moving in Shaman mode it could move to any free space outside of A8 through H8 and outside of A7 through H7.

Knight (N) - As a Knight in Fide Chess

Pawn Eater (PE) - IMPORTANT! These cannot be captured by Pawns! Pawn Eaters move as do Fide Bishops; and thus are color-bound. They DO NOT capture as do Bishops.

IMPORTANT! Pawn Eaters capture as do Pawns, diagonally one space forward. They can also capture a pawn via pawn enpassant.

Old Elephant (OE) - This piece moves 1, 2, or 3 spaces straight ahead forward; or, it can move 1 or 2 spaces backward diagonally. Thus it is an upside-down Y-mover. It cannot jump. Unlike the later Shatranj Elephants, the Old Elephant is not color-bound.

Pawn (P): As in Fide Chess. However, pawns cannot capture a Pawn Eater. Pawns can promote to any of the "non-pawn" game pieces. When a player is down to 1 pawn and he has no choice but to promote it, he will lose as the promotion takes away the last pawn.

The game is played much like Chess, but the goal is to capture all of your opponent's pawns. As soon as the last pawn of a color is gone, the game ends with victory to the one who captured that pawn.

Note: You could capture 6 pawns and if your opponent had no choice but to promote his last two pawns you would win [assuming that you had at least one pawn left]. Remember, Pawn Eaters cannot be captured by Pawns.

This game "popped" into my mind while reading a chapter of a Kabbalah book. That chapter was about Wisdom and it referred to unpredictable flashes of insight. I already had the Old Elephant in mind from reading J.C. Hallman's "The Chess Artist."

A more inclusive and more detailed breakdown of inspiration for this game follows:

(1) "The Chess Artist" by J.C.Hallman (published by Thomas Dunne Books, Sept. 2003) provided the information on the upside-down Y-mover. This was an Elephant, but to avoid confusion with later Elephants I will call it the "Old Elephant." Hallman described the ancient Elephant Y-mover(it seems he read about it in Murray's History of Chess). The piece moved up to 3 spaces straight forward, or backward two spaces diagonally. It was replaced by the Shatranj Elephant. I was hoping to bring the piece back in a game at some point, but was in no hurry.

(2)The flash of insight for Pawn Eaters came while reading "A Wish Can Change Your Life: How to Use the Ancient Wisdom of Kabbalah..." by Gahl Sasson and Steve Weinstein (published by Simon & Schuster, 2003). I was reading about "flashes of insight" when I was suddenly surprised to visualize this game.

(4) I thought of an ant-eater at about the same moment I pictured the game. Not sure why. But I suppose ant-eaters like to eat ants,as do Pawn-Eaters like to eat pawns. I am not that keen on the name Pawn Eaters... but, it is somewhat descriptive of the game's theme.

(5) R. Wayne Schmittberger's Extinction Chess - I'm not sure if this game influenced me, but it very well might have. In my game once a player's pawns are extinct the game is over. And that is one of the conditions for ending a game of Extinction Chess.

(6) As Yuri commented, V. R. Parton's 'Kinglet' (invented in 1953) has the same winning condition as does Pawn Eaters. Note that "Kinglet" uses traditional FIDE pieces and the pawns promote to Kings. Kinglet may have been the inspiration for Extinction Chess. I do not consider Kinglet as inspiration for this variation as I was not aware of Kinglet until today. I was aware of Extinction Chess.