This page is written by the game's inventor, Bishop Drax. 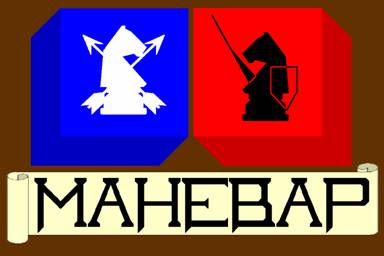 A game for two players, similar to Chess, but the board is bigger, and there are also a lot more pieces.

Pieces are beign placed in this order:

On the central field on the row closest to player is Leader's location. Two fields right and left from him are reserved for Heavy Infantry. One archer is placed on each side of them. Next to them two Heavy Cavalries are placed, then two Light Cavalries and at the end of the row two Horse Archers. 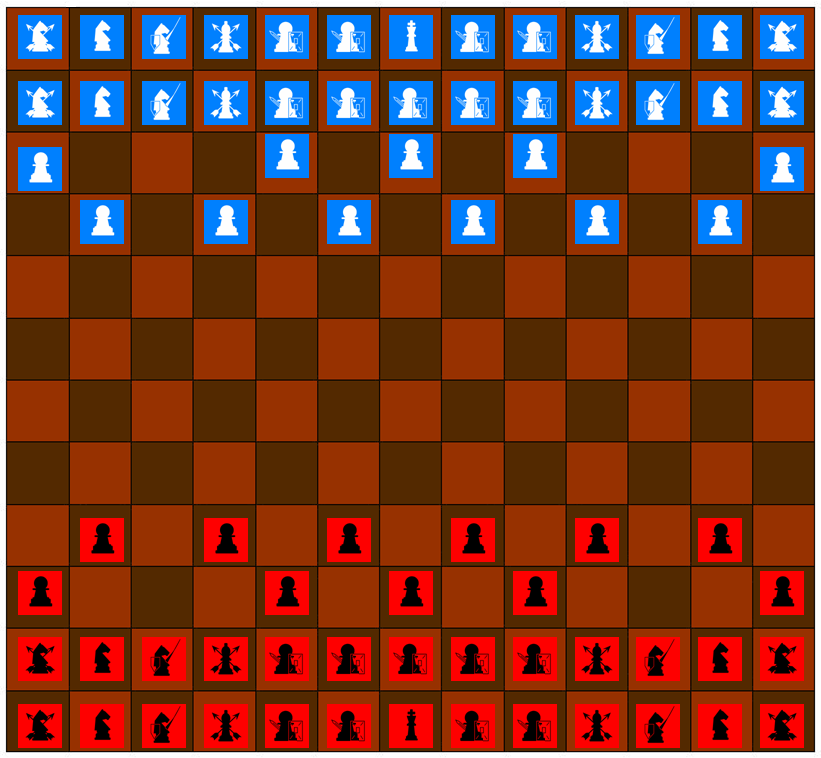 Pieces are divided in three groups:
- Infantry
- Cavalry and
- Archers

Every player has the following pieces:

Leader can move one field up, down, left or right. It is considered as a Heavy Infantry. If heâ€™s dead the game is over.

Heavy Infantry can move one field up, left or right(cannot go backwards). They can move even two fields up(but still cannot move diagonally), if there are no pieces on that field. So they cannot use two fields up for taking pieces â€“ only for movement! They attack directly the piece that is in front of it or next to it, unless it is also a heavy infantry in which case they are â€œEngaged In Combatâ€ and (nor friendly or foe unit) cannot move until some other piece attacks it from the flank â€“ which is also the only way for other pieces (except archers & horse archers) to kill heavy infantry. They can be killed without being in â€œEICâ€ but in that case the player must sacrifice one piece(e.g. player has one light infantry in front of enemyâ€™s heavy infantry which is within the movement range of a playerâ€™s light cavalry from the right side of the opponentâ€™s Hvy Inf. Player takes the opponentâ€™s Hvy Inf with his Light Cav, but also loses his Light Inf! If there was not Light Inf located next to Opponentâ€™s Heavy he wouldnâ€™t be able to take it. Archers and Horse Archers cannot be used for sacrifice) WARNING! If a Leader is located next to the heavy infantry, he too will be â€œEICâ€.

Light Infantry is the slowest/weakest unit, but the most numerous. They move 1 or 2 fields in four directions straight, or one move (left or right ahead)diagonally. They cannot move diagonally backward! They can take opponentâ€™s pieces on any field where they can move. Cannot attack(and kill) heavy infantry unless it isâ€œEICâ€.

Heavy Cavalry moves similary as knight in chess, or 2-3 fields straight. It can also attack four fields directly. Moving four fields(either directly or three up & one aside) is called â€œChargeâ€. Leader & Heavy infantry can be killed only with charge! Charge cannot be used for moving, only for attacking. When not attacking it can move at least 2-3 moves(straight) or 2 straight & 1 aside(like a knight). Cannot move if the range is short(2 fields straight is minimum)! If there is a piece(friendly or foe) standing od the first field next to it - then Heavy Cavalry cannot move in that direction.

Light Cavalry moves similarly as queen in chess. It can move up to 8 fields straight(at least 2) and 4 fields diagonnaly(no min. movement range). It cannot attack heavy infantry if it is not engaged in combat. Cannot kill heavy cavalry directly, only diagonally. Also, cannot attack any unit standing next to it â€“ up,down,right or left.

Archer moves similarly to Light Infantry but(same as horse archer) cannot attack directly. It has range on the four sides straight from him. Maxium range is 4 fields, and minimum range(horse archer doesnâ€™t have it) is 2 fields. They cannot shoot the unit which is located on the first field next to them. So, the best way to attack them is to approach them diagonally or to use heavy cavalryâ€™s knight movement. Rule for killing is the same as for horse archers â€“ when some unit is located within its range it can take it without movement. Because of their long range they are excellent units to strike from behind. Like Horse Archers, they are powerless against leader & heavy infantry, even when they are â€œEICâ€, but can block their movement.

Horse Archer moves similarly to bishop in chess, but cannot attack any unit. Instead it has range â€“ the two closest diagonal fields in all four directions. So, when moving horse archer you cannot take a piece, and when taking a piece you donâ€™t move it. They must be protected, else they are easy prey â€“ especially to light cavalry. They are powerless against Heavy Infantry and Leader â€“ Heavy Infantry is the only unit that can stand on the marker without beign hit, but they cannot move on a field which is being targeted by archer. And that is their main goal against Hvy Inf â€“ to prevent them from moving! Their unique ability is that they can jump over the pieces that are on their way. It can move one field straight, so it doesn't suffer from the onecollored chess' bishops limitations.

The object of game is to capture the enemy Leader. If the Leaders are the only pieces left on board it's a stalemate and the game is ended a draw. If one player cannot move any piece, or cannot move Leader to a safe square, that player loses the game. Players play one after the other, like in standard chess, but they can play not just one, but also two (and in special condition three) moves per turn.

Player cannot move and take pieces on the same turn. When taking pieces player can do it with only one unit (and so he loses maneuver advantage of playing with more pieces). The only way to take two pieces on the same turn is that you take one piece with either Infantry or Cavalry, and if there was any piece within range of your Archers, you can take that piece as well.

Leader and Heavy Infantry are Invulnerable to Archers, but they cannot move on the square which is targeted by Archer.