My 10-Chess contest entry Wildeurasian Qi extended Wildebeest Chess to include Chinese-style Hopping pieces in the same pattern of 2 each of a colourbound and non-colourbound pair of duals plus one of their compound, with a Chinese-style River. It occurred to me that I could extend this further, in variants not restricted to complying with a contest. I began by adding an extra rim of cells around the board to accommodate new pieces and easing the River restrictions in a new way.

Two new groups of pieces occurred to me. A still-larger board suggested longer leapers. The Zebra and Giraffe are well-established, and on a 12x12 board their duals would have cells from which they could make all 8 moves. There is also the interesting contrast that the Zebra is close-to-diagonal with a close-to-orthogonal colourbound dual, and the Giraffe vice versa, which influenced my image choices. So introducing those leapers was one possibility, which I name WILDEURASIAN BESTIARY in allusion to the animal names. Another was a sort of pun analogue, like enharmonic changes in music. A characteristic of northeast Asia's standard games is one kind of orthogonal piece at the corners (as in most standard games) but another kind next in diagonally - a forward-only piece and the familiar Rook in Shogi and the Rook and Cannon in Xiang Qi and Janggi. The first pair are inherited in my Mitregi, and the second in Wildeurasian Qi. It is an obvious extension to combine the two into a WILDEURASIAN MITREGI with all three types of orthogonal piece along the long diagonals.

Tying in with this was the idea of keeping the position of the Wildeurasian pieces relative to the board, and the spaces between them, and putting new pieces on the back rank. In Wildeureasian Mitregi this leaves corner pieces en prise to each other, but as they are protected by Knights this should not matter. I envisage the Wildeurasian pieces being represented by the same two FIDE sets distinguishable by size as in Wildeurasian Qi and the extra ones by Shogi pieces - in one case because they are forward-only and inherit Shogi promotion and reintroduction rules, and in the other because they are "lightweight" in being able to leap such distances!

One further extension of this idea is a DENSE-RIM WILDEURASIAN MITREGI including a sixth set of five based on forward-only Hopping pieces, but that requires additional physical pieces, perhaps Xiang Qi ones in allusion to that being the introducer of Hopping pieces! 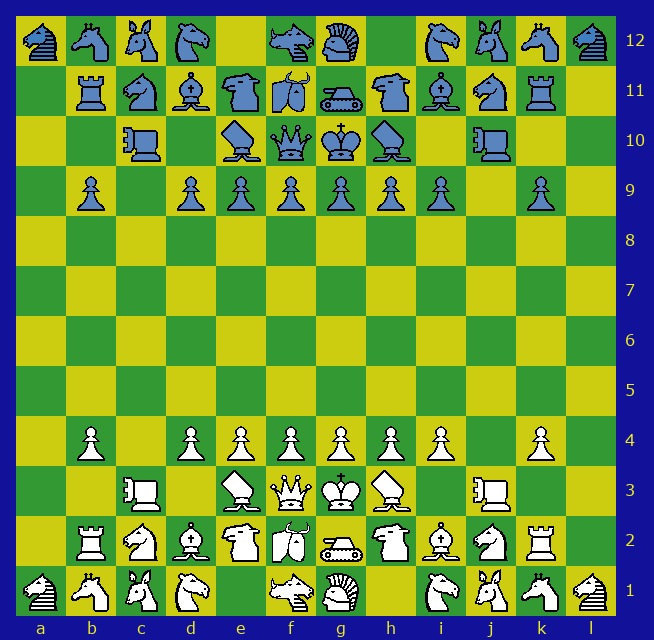 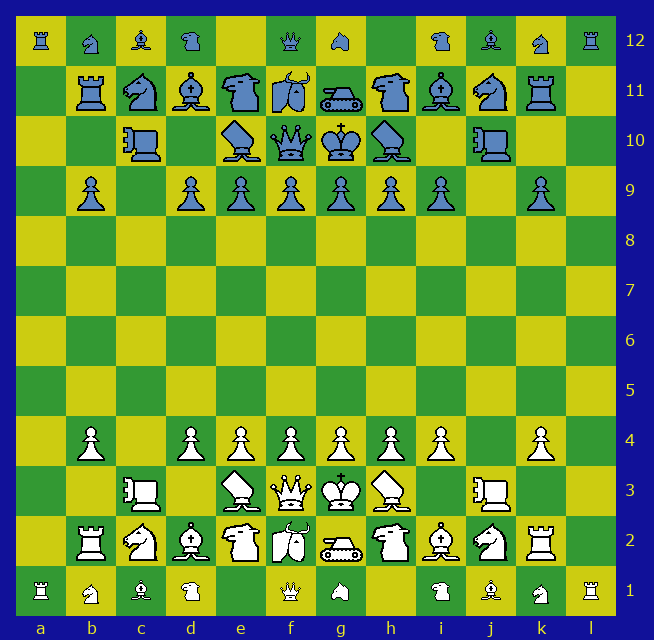 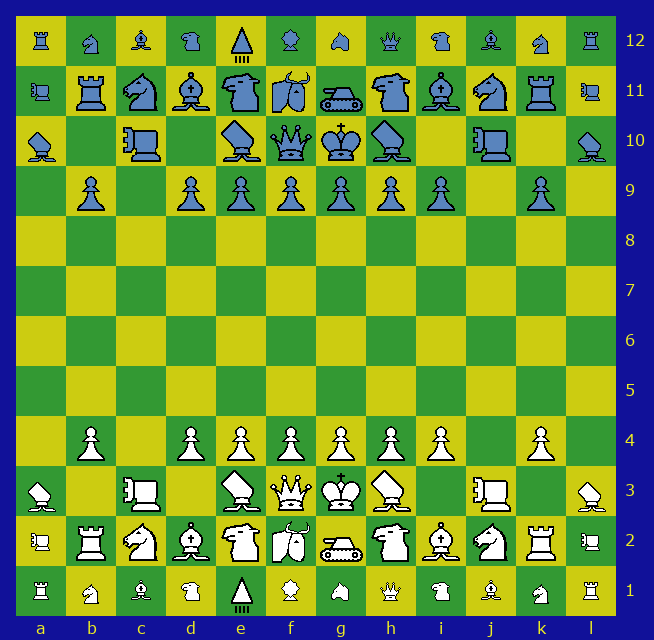 There is no initial double-step move or En Passant.

Pawns crossing the River are promoted to Wazirs, remaining Wazirs should they retreat. A Wazir ending a move on either army's second rank (the back rank of the original 10x10 board) may be promoted to a stronger symmetric piece captured by the enemy, if there is one.

Other forward-only pieces may be promoted on ending a move anywhere in the ranks of the enemy camp, which as in Shogi occupy a third of the board. If they have no further moves unpromoted, promotion is compulsory.

A player capturing an enemy forward-only piece may reintroduce it as one of their own, unpromoted and on a rank where promotion would not be compulsory, in place of a normal move.

Castling requires that the King has not left the middle two files, the Rook involved has not left its own and the Knight file, neither has left the second and third ranks, and both are on the same rank with no intervening piece. They move towards each other within that rank, the King to the Bishop file and the Rook to the Camel file. The King may not Castle into/out of/through check or bare facing.

A player may not end a move with:
1 the King under threat by another piece;
2 the King on the enemy side of the River;
3 the King sharing a file or diagonal with the enemy King with no intervening pieces;
4 the enemy having 4 Princes on the board in WEA Mitregi or 8 in DR WEA Mitregi;
5 half or more of certain of their pieces beyond the River. These pieces are the King, Queen, Gnu, Tank, Zebu, Guru, Princess, Handyman, Princeling, Tankturret, and any Princes. Pieces off the board are not counted. A player starting a move in situation:
1 may remedy it by moving the King, capturing the Checking piece, blocking or unblocking to leave the wrong number of intervening pieces;
2 is impossible as it would require ending their previous move in that position;
3 is impossible as it would require the enemy ending a move in that position;
4 may remedy it by capturing an enemy Prince;
5 may remedy it by withdrawing a relevant piece, reintroducing a Princess/Handyman/Princeling/Tankturret on their own side of the River, or promoting a Wazir to Queen/Gnu/Tank/Zebu/Guru in their own camp. A player who cannot avoid ending their move in such a situation loses if they are already in one, and draws if they are not.

I have since thought of a few alternative fourth and fifth groups. One possibility is pieces from two 4 linepiece Fusion variants - any two out of Gryphon+Anchorite=Gorgon, Girlscout+Boyscout=Doublescout, and Wolf+Fox=Werewolf - although the Gryphon and Anchorite are not strictly speaking duals as neither is colourbound. Any one of the three groups could be added to the main fourth and fifth groups - or all three used in place of the three forward-only piece groups - for a dense-rim variant.