This page is written by the game's inventor, Patrik Hedman.

I tried to incorporate a piece that moves as a "crooked bishop", but I called it a "general" instead. 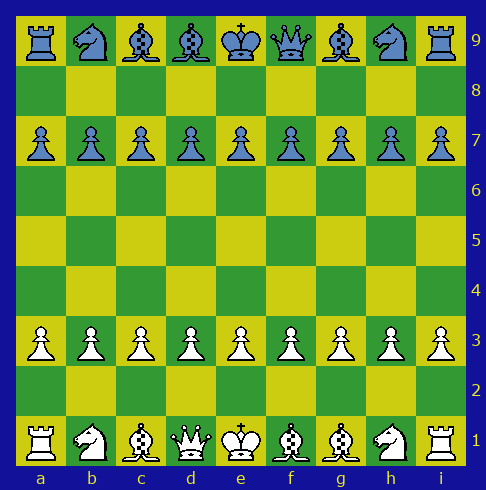 General is otherwise known as boyscout or crooked bishop. It moves in a series of diagonal steps, alternating one space at a time between the two diagonal directions that do not move it back toward its origin. Its powers of movement in any general direction resemble a double helix wrapping around a single rank or file.

The Blacksmith is a divergent piece. Without capturing, it can move 1 step orthogonally straight forwards or backwards, or move as a Rook horizontally. They can't jump. To capture, it may move 1 space in any diagonal direction.

Rules same as in orthodox chess, except: