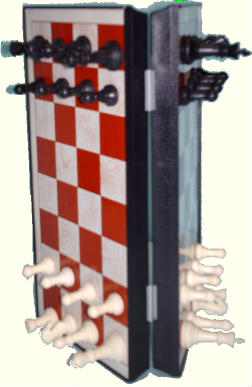 I did not invent this variant, and I cannot find it in Pritchard's encyclopedia or anywhere else.

Many chessboards do fold in half. And if it's magnetic, then the pieces can stick to both halves, so you can play the variant as is. Folding magnetic sets are hardly new or rare -- I've had a cheap one for 30+ years. I don't remember this variant being called anything particular, we just "played on a folded board".

Fold a standard board along the line between the d-file and e-file, to get a double-sided 8x4 board. A piece on top can move past the edge of the board, in which case it flips and continues underneath. And vice versa.

You can check that the 2-D variant is equivalent to the 3-D variant.

I also posted a variant id question on chess stack exchange, but I got silence.