Ascension is played on a 6x6 board with two King pieces flanked by a Ferz and a Wazir on each side. Six Pawns are placed on the second rank. 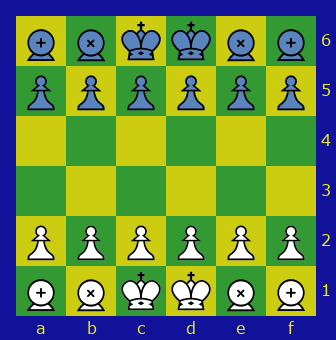 The King moves as in Orthodox Chess.

The Pawn also moves as in orthodox chess, but cannot double advance on its first move and hence also without the en passant ability.

Two Ferz pieces are placed directly adjacent to the Kings, and they move and capture one square diagonally.

Two Wazir pieces are placed at the corners of the back rank, and they move and capture one square orthogonally.

Each piece in Ascension promotes upon reaching the enemy side (4th rank from the point of view of the promoting player):

Similar to The Consuls, the game is won when either King is checkmated. A fork or a skewer checkmate is also possible.

All pieces gain an extended moveset upon reaching the enemy side, hence the name Ascension.

Play with the ChessCraft Android app: