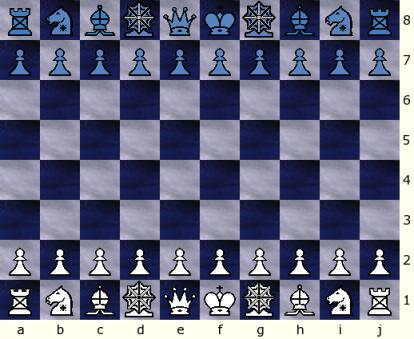 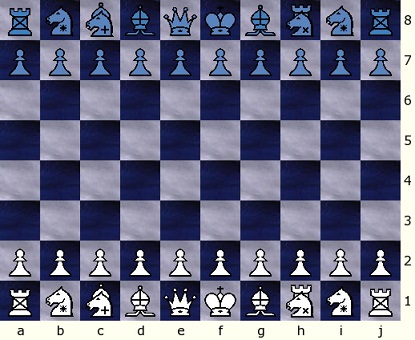 Ajax-Capablanca Chess is simply a game with Ajax-Chessmen on a Capablanca 10x8 board.

There are two setups: One with Ajax-Ministers Ã  la Ajax Chess (but without reverse symmetry, above left); and a second with Capablanca's 10x8 setup (above right) but with Ajax-Archbishops and Ajax-Chancellors along the Ajax minor pieces (Rook, Bishop and Knight).

Ajax pieces hace the peculiarity of having one-square non-capturing 'adopted' moves that allow them to complete all the moves of a Courier Man or Commoner.

Ajax-Archbishops can move like Bishops+Knight, and can also move one non-capturing step orthogonally.

Ajax-Chancellors can move like Rooks+Knight, and can also move one non-capturing step diagonally.

Rooks, Bishops Knights are as in Ajax Chess.

King and Queen move as in Orthodox Chess.

Pawns are allowed to promote to Queen, Rook, Bishop Knight and Ajax-Ministers (in the first setup), or Ajax-ArchBishops and Ajax Chancellors in the 2nd setup.

Castling is three squares to either side of the board.

Ajax-Capablanca Chess (ACC) was created by JosÃ© Manuel Carrillo-MuÃ±iz, from Puerto Rico in 2009.