The champion was invented by Dan MacDonald in 1998 for his game Omega Chess.

In the diagram below, the Champion, which is normally symbolized by a warrior's helmet, is here represented by a heraldic image showing a cross surrounded by four dots. This image, which is used to represent it in the Abstract set, also serves as a kind of movement diagram. In the actual diagram, light dots represent the Champion's four one-step orthogonal moves, and dark dots represent its two-step leaps. 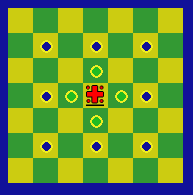 Even a piece with the combined powers of alfil and dabbabah can only reach a fourth of the squares on the board; this problem is solved by adding in the single orthogonal step to the champion's movement.
You can see problems and sample games using the champion on the Omega Chess home page.

The Champion can generally force checkmate against a bare king, with the help of its friendly king. Try it (on 8x8)! This is an item in the Piececlopedia: an overview of different (fairy) chess pieces. Written by Ben Good and Fergus Duniho WWW page created: February 15, 1999. ﻿