Following on from my last physics inspired variant that took ideas from the Lilliputian realm of reality, this variant is inspired by the Brobdingnagion description of reality, namely theÂ Big Bang theory with the its expanding universe and the creation of matter. This variant thus has a playing area thatÂ starts small with only the Kings in play and then expands as the pieces are dropped and later contracts as pieces are captured.

As is usual for me, my concern is with the playing surface rather than the properties of the pieces. Â Thus this variant is played by two opponents using the standard FIDE set of pieces, with some minor adjustments to their movement. Â In the following description the two players are referred to as Light and Dark.

This is shown in the next image below.
The board consists of 121 squares (11x11) but play starts with just the two Kings separated by a single square in the central 3x3 part of the board. Â The remaining pieces start the game off-board. Â The Dark player has the red/brown pieces while the Light player has the pale green/blue pieces. 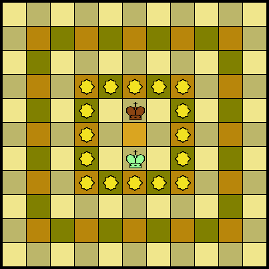 The pieces are the standard FIDE set with the following adjustments:
The Pawn's movement is shown in the next image. Â Black dotsÂ indicate possible passive (non-capturing) moves, while red crosses indicateÂ those squares where the Pawn may make a capture. 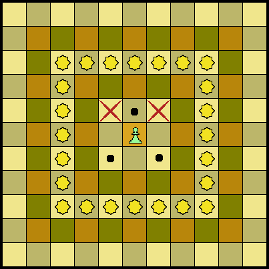