When I first stumbled upon the Chess Variant Pages back in 2016, it was due to an image of a large chess variant I encountered while looking at images of chess variants. The image I found was a picture of Fergus Duniho's Gross Chess, an expanded version of chess played on a 12x12 board with a wider assortment of pieces. Shortly after that, my interest in the site started to grow, as did my interest in chess variants in general. I also started to invent my own chess variants. I started by placing the 12 different pieces from Gross Chess onto a 10x10 board and making a few small changes to the rules to make the game more similar to chess, giving birth to the game of Yangsi.

An interactive diagram has been provided (The Javascript source code was written by H. G. Muller) to make it easier to understand how each piece moves. The diagram uses pieces from the Musketeer Chess Board Painter. 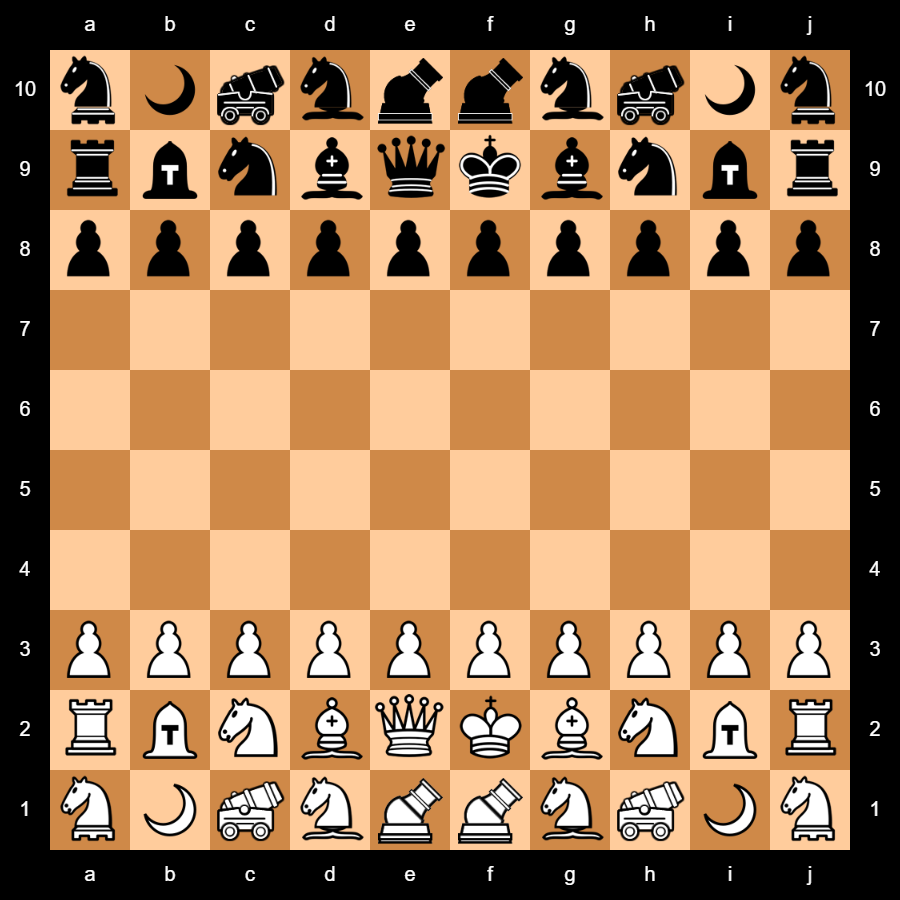 Aside from differences in the board, pieces, and setup, Yangsi is played like FIDE Chess with the following differences:

Pawn promotion: When a Pawn reaches the last rank, it must promote to another piece of that player's choice: a Queen, Marshall, Archbishop, Rook, Champion, Cannon, Knight, Bishop, Vao, or Wizard of the same color. It cannot promote to King or another Pawn.

Castling: When castling, a King may move two or three spaces toward the Rook when it castles, with the Rook leaping over the King to the closest space the King has just passed over, so that King and Rook end up adjacent to each other. The usual castling conditions from Chess apply. A King may not castle from or through check, all spaces between the Rook and King must be empty, and neither piece may have moved before.

An important factor in determining the outcome of the game is whether a player has enough material checkmate the enemy King. The most important aspect of determining this is the distinction between major and minor pieces.

The Queen, Marshall, Archbishop, Rook, and Champion are all major pieces. A single major piece that hasn’t been captured is sufficient mating material because it can checkmate a lone King with the help of its own King.

Thoughts on the rules

Pawn promotion: In Chess, Pawns can promote to any piece that is not a pawn or King. I carried this rule over to Yangsi without altering the meaning of the words used, allowing for a wider range of choices.

Castling: Because of  the larger board size, I decided to allow the King to move two or three spaces when castling, as this allows the king to get to the side of the board faster than if normal castling is used. I also allowed normal castling to allow for more opening variations.

Threefold Repetition: I decided to adopt this rule and its lesser-known fivefold repetition counterpart** for Yangsi without altering them at all, as there wasn't any need to be change them.

*The 75-move rule is a lesser-known rule in Chess which is closely linked to the 50-move rule. It states that if no pawn has been moved and no capture has been made in the last 75 moves by each player, then the game is automatically a draw, which means that a player does not have to claim a draw for the rule to be invoked.

**The fivefold repitition rule is a lesser-known rule in Chess which is closely linked to the threefold rule. It states that if the same board position occurs five consecutive times, then the game is automatically a draw, which means that a player does not have to claim a draw for the rule to be invoked.

You can Play Yangsi online with Game Courier.