Bigger than bigger ! This is a Chess variant with 26 different pieces on a 16 x 16 board, an unrealistic summit. There are 256 squares and 64 pieces per side, which gives the same density than as Orthodox Chess. In Terachess, one will find 24 kinds of men encountered in Shako, Tamerlane 2000, Metamachy, Zanzibar, Teramachy and Gigachess, completed by the Sorceress and the Duchess.

The first Terachess had been designed in 2008 and found a certain success. It has been included in the second version of Jocly. A full set has been manufactured by Khoa Pham in Vietnam, who titled it Fairy Chess, the Mother of all Battles. Its openings have been studied in Japan, within a detailed blog linked here.

In 2020, Terachess has evolved into Terachess II in order to be consistent with other chess variants of Cazaux. Several changes have been made. The Ship and the Corporal are no longer used. However, compound pieces that can be made by combining the moves of Rook, Bishop, Knight and King are now present. Except for the King and the Amazon, all non-Pawn pieces are present as pairs.

Terachess II is the most complex stage in the family of Cazaux's chess:

The board is a 16 x 16 checkered squares with a white one at the right end of each player.

There are 64 pieces per side.

The white King is placed on the center of the third row on a black square, the black King being on a white square. The Amazon lays beside the King.

The other pieces are arranged as on the diagram below. 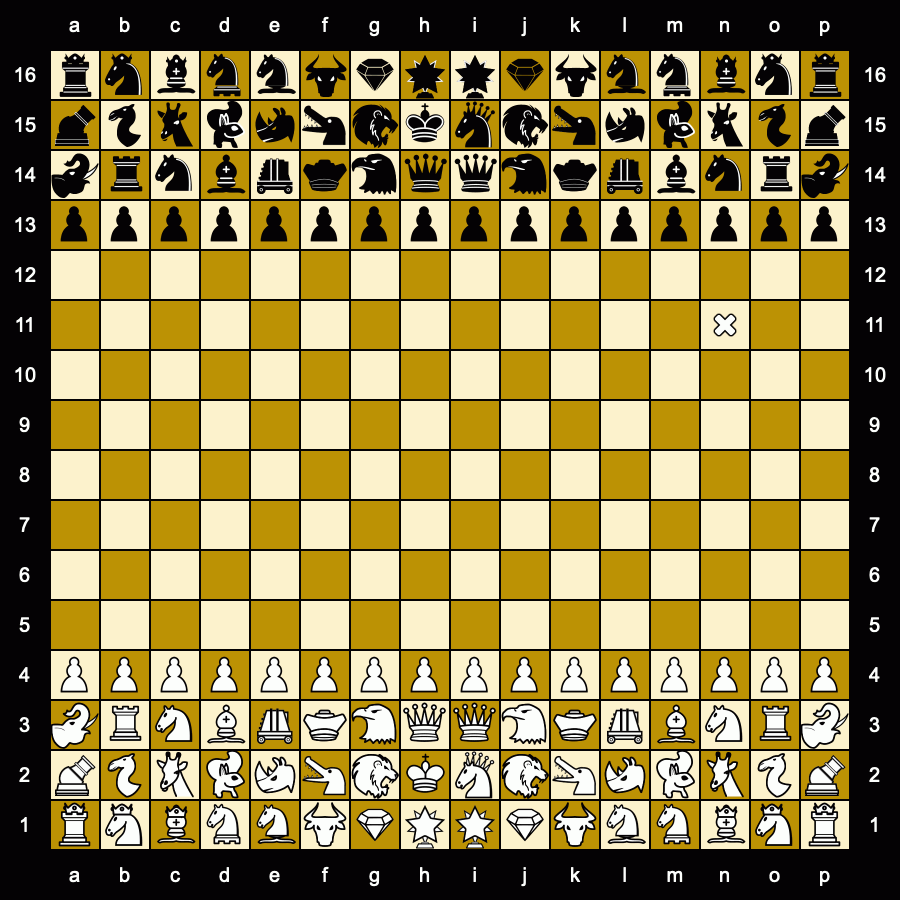 King: moves 1 step in any orthogonal or diagonal direction to an unattacked square. The King is in check if it is attacked by one or several enemy pieces. It is forbidden to play a move leaving one's King in check.

There is no castling in Terachess II. On its first move, the King may jump to a free square at two squares' distance. For instance, from f2, it can jump to d1, d2, d3, d4, e4, f4, g4, h4, h3, h2 or h1). It does not matter if the square jumped over is occupied or not; however, the jump is forbidden if that intermediate square is threatened by an enemy piece. When jumping like a Knight, at least one of the two intermediate squares must be free of threat (e.g., if jumping from f2 to h3, either g2 or g3 must not be under attack). The King's jump is not permitted if the King is in check. This rule, which was once prevalent in medieval European chess, replaces castling. Identical to Metamachy.

Rhinoceros: moves one square vertically or horizontally and then slides away an indefinite number of squares diagonally. It is authorized to go only one square along its rank or file. It cannot jump, and the unobstructed path must start with the orthogonal movement. This piece is inspired by the Unicorn of medieval Grande Acedrex. It is a counterpart of the Eagle.

Prince: a non-royal King who moves and captures one square in any direction, but without being hindered by check. It has been inspired by medieval games like the Courier chess, an old chess variant, played in Germany, where it is called "Man". Like the Pawn, it can also move without capturing to the second square straight ahead.

Squirrel: also a compound piece that jumps as a Knight or jumps at 2 squares, diagonally (like an Alfil) or orthogonally (like a Dabbaba). (The Squirrel has been introduced instead of the Troll in May 2021)

Sorceress: it moves like a Queen and needs an intermediate piece between itself and its victim to capture it. The Sorceress jumps the intermediate and takes the victim on its square. The intermediate is left unaffected. Like the Queen is Bishop + Rook, the Sorceress is Cannon + Crocodile.

Several pieces can get a promotion at Terachess II when reaching the last rank of the board. Promotion is immediate, compulsory and cannot be refused.

Zillions gives these average values, normalized to 5 for the Rook :

These values are just given for a very rough estimate. A lot of players would disagree and give less or more points to several piece. Never mind, make your own scale.