I was browsing the web on the subject of "tessellating the Euclidean Plane" when I came across this page on hexagonal tessellations.Â  Hexagons and hexagonal chess variants hold a certain fascination for me and I was particularly drawn to the radial tessellation centred on an octagon.Â  Serendipitously I had also just been reading about Circular Chess, and so was born the idea of creating an hexagonal variant with a circular motif.Â

Due to the increasing number of cells rather than an increasing size of cells, as we move outward on the board, the resulting game might be better termed "radial chess" rather than "circular". 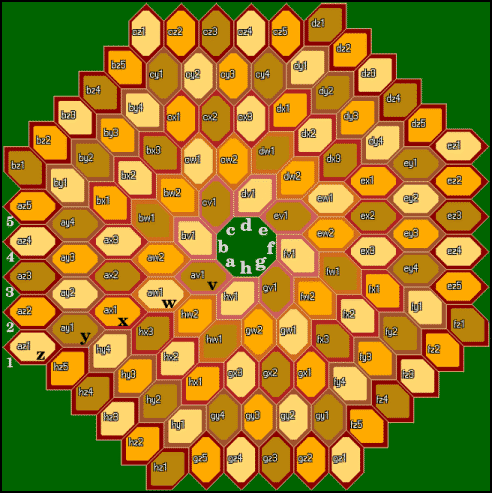 As well as being arranged in the 5 tracks, the cells of the Sunflower board can be divided into 8 sectors.Â  In each of these the 15 cells that make up the sector all have the same alignment.

The image on the left demonstrates how this division into sectors is used to produce the individual cell references.Â

Each sector is referred to by a letter, a, b, c, d, e, f, g, or h.Â  Sector (a) consists of the 15 cells aligned East to West and expands outwards to the West or Left, from White's perspective.Â  The remaining sectors are labelled from Sector (a) in a clockwise direction.

Finally there are up to 5 cells running clockwise along each path from one prime radial to the next.Â  These "path segment" cells are numbered clockwise from 1 to 5.

Each player starts with 20 pieces:

A player wins if:

Although partly inspired by Circular chess this variant is not an attempt to create an hexagonal equivalent of that game.Â  Rather it is an attempt at using a delightful hexagonal tessellation as the basis for a game board.Â  Any attempt at transferring the circular game into an equivalent hexagonal format would need at least to keep the same number of cells in each encircling ring, rather than the increasing number as seen here.

This increasing number of cells, with 40 hexes in the outer track, is the main reason for the restriction on orthogonal movement as I wanted to maintain a balance between the strengths of bishop and rook.Â  As the longest diagonal and the longest non-path orthogonal is 5, a maximum move of 5 hexes might seem the obvious choice.Â  However I wanted to keep the rooks slightly stronger than the bishops as is the usual case in chess.Â  On a board with hexagonal cells increasing the obvious 5 to a maximum of 6 seemed appropriate.

The length of the outer tracks also explains theÂ  enhanced pawn movement.Â  Without theÂ  increaseÂ  inÂ  movementÂ  allowed to the pawn on the outer paths progress from starting position to promotion would be just too slow.

I was also unhappy with the knight's move on a board which is effectively quite narrow and which thus prevents a knight from achieving it's maximum move potential.Â  So I devised a leaping piece better adapted to the board's topology to replace the knight, which I have called a Dragoon.Â  Originally dragoons were mounted infantry, able to defend a position or ride to the point of conflict before dismounting to fight on foot.Â  So the Dragoon is able to move, but not capture, by stepping 1 cell in any direction, or move and capture by leaping 2 or 3 cells in any direction.Â  The icon used here for the Dragoon is the orthodox knight backed by a pair of crossed cavalry sabres.

Checkmate by White is possible in just 2 moves, as illustrated by the following images