This page is written by the game's inventor, Lily Dawn.

Spookyhouse is a dropchess variant on a 10x10 board. It takes influence from several other variants, but most significantly Xhess. I highly encourage anyone who is interested in this variant to also check out Xhess, since it's a very obscure variant but nonetheless totally fascinating in my opinion~! Spookyhouse's board setup is what I view to be an "improved" version of Xhess', and it shares most of the same pieces (albeit with some very significant differences). Seriously, check out Xhess!

Other influences include Shogi, Chess 2: The Sequel, and of course Crazyhouse. 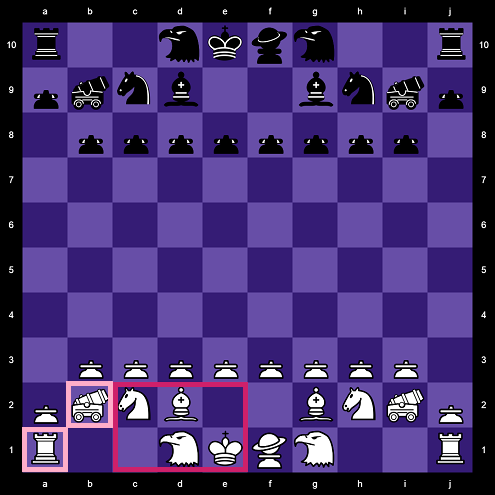 This diagram shows one of 720 possible starting positions. Witches are always placed as shown, but the other pieces are randomized as follows:

10 Witches (Xhess) - Known as Horsemen in Xhess, they move and capture as orthodox pawns (but without the ability to move two squares forward for their first move), and also move (but do not capture) as Xiangqi Horses, but only forward (a Xiangqi horse moves as a knight, but without jumping; instead, it slides one square orthogonally and then one square diagonally). If they reach the back rank, they Promote to any piece of the player's choosing other than a King or Ghost.

2 Cannons (Xiangqi) - Move as a rook, and capture as a rook only if they first jump over exactly one piece in the process.

1 Ghost (Chess 2: The Sequel) - Moves by teleporting to any open square on the board. Cannot capture, cannot be captured.

Follows the rules of Chess, with these changes:

Drop Rules
As in Crazyhouse and Shogi, when you capture an opponent's piece, it goes into your Pocket. You may later Drop that piece on any open square for your turn, instead of moving a piece. Witches have two limitations: they cannot be dropped on the first or last rank, or on any file that is already occupied by a Witch of the same color.

Miscellaneous
If you capture a piece that was promoted from a Witch, it goes back to being a Witch.
There is no castling, no en passant, and if you get stalemated you lose.

The pieces are basically a team of all my favorites. The Phoenix is an exception; with that I just needed a jumping piece with roughly the same strength as a Knight, so I 'made it up' and then correctly guessed that it was already in one of the large Shogi variants! Out of all of these I think the Ghost is the biggest game-changer. It's certainly a game-changer in Chess 2; that game has two of them, and they basically completely take over. The lack of queen, larger board, defensive abilities of the Ghost, and restrictions on Witch drops make it so this game will probably be less forcing and aggressive than Crazyhouse, which I would view as being a positive.

My goals with the randomized initial positions were to preserve symmetry and avoid overly forcing initial positions. I think a previous version of Spookyhouse allowed the rooks to be placed on a bunch of possible starting squares and it of course caused problems. I know random starting positions are controversial and can be a matter of taste, but I'm a big fan of what they bring to the table.

My hope is to one day have a live online playable version of this, with timers and rankings and so on. Of course that's completely beyond me to accomplish at the moment! I hope people enjoy it regardless~