This page is written by the game's inventor, Andy Thomas.

Sino-European Chess: This is an attempt at creating a hybrid between European or FIDE chess and the Chinese Chess (Xiang Qi). 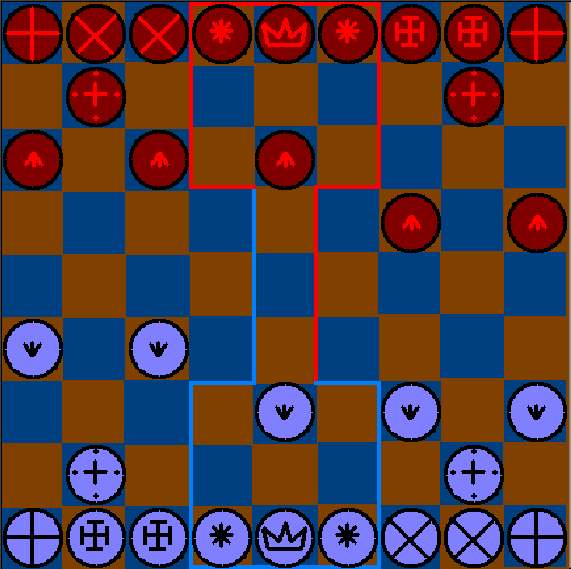 The Board: 9 squares (files) wide by 9 (ranks) deep. The center file is known as "the Great Wall." The 3x3 areas in the center of each back line are the respective "Castles."

There are 5 "soldier" (P) pieces per side; they are on each side's either 3rd or 4th rank.
On each side's 2nd rank, there are 2 "cannon" (C) pieces:
On the "back line," or 1st rank respectively for each side, there are the following pieces, from left to right:

One movement rule which applies to all pieces: As in both FIDE and Xiang Qi, no piece can end its move in a square already occupied by another friendly piece (no exceptions).

A piece can always end its move in what was an empty square.

If a piece ends its move in a square occupied by an opponent's piece, this is a capture.

Soldier (P): P pieces can move 1 square in any of the 3 forward directions; straight forward or right or left along the diagonal; in any of these cases, the P arrives on the next rank of the board. P pieces can either move or capture in any of these three directions. The P cannot move sideways, nor can it move backwards in any fashion (vertically or diagonally). If a P reaches the opponent's back line, it promotes to a FIDE queen (Q). The P does not have an optional 2-cell first move, as in FIDE; thus as well there is no en passant either.

Rook-Chariot (R): The R piece is identical to a rook in both FIDE and Xiang Qi; unlimited "orthogonal" (horizontal OR vertical) movement.

Knight (N): An N "jumps" exactly as a Knight in FIDE chess. It is never blocked as a Horse in Xiang Qi can be.

Bishop (B): The B piece moves exactly like a "bishop" in regular chess. It can move any number of squares diagonally. There can be no intervening pieces - friendly or opposing - between the originating square, and the ending square. The B piece is limited to a player's "right" side of the board, including both castle areas, and along the Great Wall. It cannot travel beyond these areas and into the opposite - "left" - side of the board.

Lieutenant (L): The L moves and captures as a king in FIDE chess; one square orthogonally or diagonally, but it is not a royal piece. The L may leave the castle.

King (E): Moves and captures a King in FIDE chess - 1 square orthogonally or diagonally - except that it is limited to within both castles, and along the Great Wall. The respective castles include 9 squares; a 3x3 area at the back and center of each side. Thus the kings can travel from one end of the board to the other, but must remain within the castles or along the wall. There is no "presumed check" between kings as there is in Xiang Qi. The King pieces in Sino-European Chess may thus face each other in an open file across the board. Of course, they can never be adjancent to one another. The King is the only piece in the game which is confined solely to inside the castle and wall areas. In Sino-European Chess, the King cannot make a "castling" move with a Rook, as it may in FIDE Chess. There is no "castling" move in Sino-European Chess.

Queen (Q): A Q moves like a combined rook/bishop as in FIDE chess. A Q only appears when a P is promoted to Q by reaching the opponent's back line.

Piece Promotion: Any P which reaches the opponent's "back line" (1st rank) is automatically exchanged for a FIDE Queen. The P is the only piece which can promote.

As in Chinese Chess or Xiang Qi, blue goes first, then red. Play is resumed in this fashion - without any turn limit - until a king is checkmated, or there is a stalemate, or the two players declare a draw. A draw result is automatic if neither side can conceviably achieve checkmate. A stalemate results in a loss for the player who cannot move but by putting their king into check. Pieces move as in regular chess; one move per side per turn.

Notes: The bishops are side by side due to the 9 files of the board, and to the castle-wall rule. In short, you have some of the mobility of a FIDE bishop, along with alternating colors (which would not occur on a board with an odd number of files if they were to open on either side of the king, equidistant). Thus you have some of that FIDE mobility and the dual-color property of the combined pair, yet you have sort of the confinement to "one half" of the board (more or less 5 out of 9 files) as the Elephants or Ministers are so confined to their own side of the River in Xiang Qi. Note that the bishops of both sides can move onto the Wall and into both castles; these are "shared cells" for the bishops of both sides.

The pawns are set up somewhat as in Xiang Qi, but are extremely valuable in that they promote to Queen if reaching the opponent's back line. There is no sideways promotion for "river crossing" as in Xiang Qi, and the diagonal move/capture is borrowed from FIDE. The pawns open on differing ranks so as to facilitate movement for the knights; yet at the same time to keep the opposing pawns themselves at a 'reasonable' distance from one another.

The knights are fairly powerful; perhaps moreso in relation to the overall piece set than in FIDE, or as horses would be in Xiang Qi.

The Rooks are the most powerful pieces for as long as neither side is able to promote a pawn to queen.

The Lieutenant was added in to give the piece set 16 pieces, as in both FIDE and Xiangqi. Also, the Lieutenant is a sort of "stand-in" for the Assistant found in Qiang Qi, and for the fact that - in Sino-European Chess - there is no castling of King/Rook as in FIDE. The Lieutenants make up for the loss of King mobility found in FIDE, by themselves being able to leave the wall/castles area and entire the fray about the field of battle at large.