This variant came about through the duality between the cubic-cell geometry and that of my recent variant OctHex 146, in which the orthogonals or each correspond to the diagonals of the other. In 2d the duality is much simpler: the square-cell geometry is its own dual, perhaps unsurprising given that the numbers of orthogonal and diagonal directions are both 4.

My first thought was to start with the FIDE array and stick extra cells at the cell vertices. This raises the question of which edge vertices to include. I discounted excluding all 32 as this would leave the transformed pieces on edge diagonals. I decided to include all but the corner ones.

I looked at what the FIDE pieces had become. The Pawns had become something a bit new, but a name came to mind for that. The simple pieces remained familiar (though different). It was only with the middle pair that I was unhappy, as they lacked long-standing names. One was the one that I termed Fezbaba in Turn Qi and subsequently in Symgi. The other was the rider of that piece, and I thought that having both might be confusing.

I therefore decided to make the hidden array the Mongolian Chess one, which in place of the Queen has a Rook+Ferz piece - Chatelaine in my terminology. This transforms into Bishop+Dabbaba, for which I also have a distinctive name. Following the Mongolian lack of special moves also simplified the variant greatly, although I felt a duty to do something with at least that variant's "no Checkmate by Knight" element.

The final stage was to add original pieces back on the edge diagonal behind the transformed pieces. This meant Rooks at each end and Knights next in, with the King in the middle. Bishops needed not be added as these were what the original Rooks had become, so I added pieces reversing the orthogonal and diagonal significance of the transformed central pair.

As an afterthought I added a second array, based on a corner. Forward-only pieces are affected by which is used, as the first has two forward orthogonals and one forward diagonal, and the second vice versa. I thought it more interesting to try both out.

I have since added the following offshoots of this variant:Nested Shogi, Nested Xiang Qi, and Doubly Nested Chess. 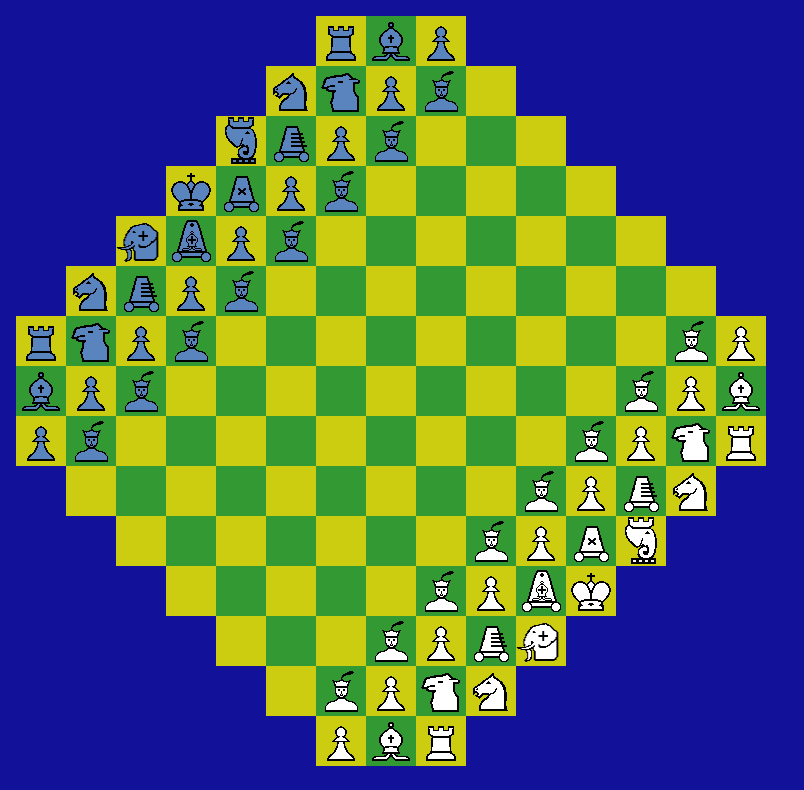 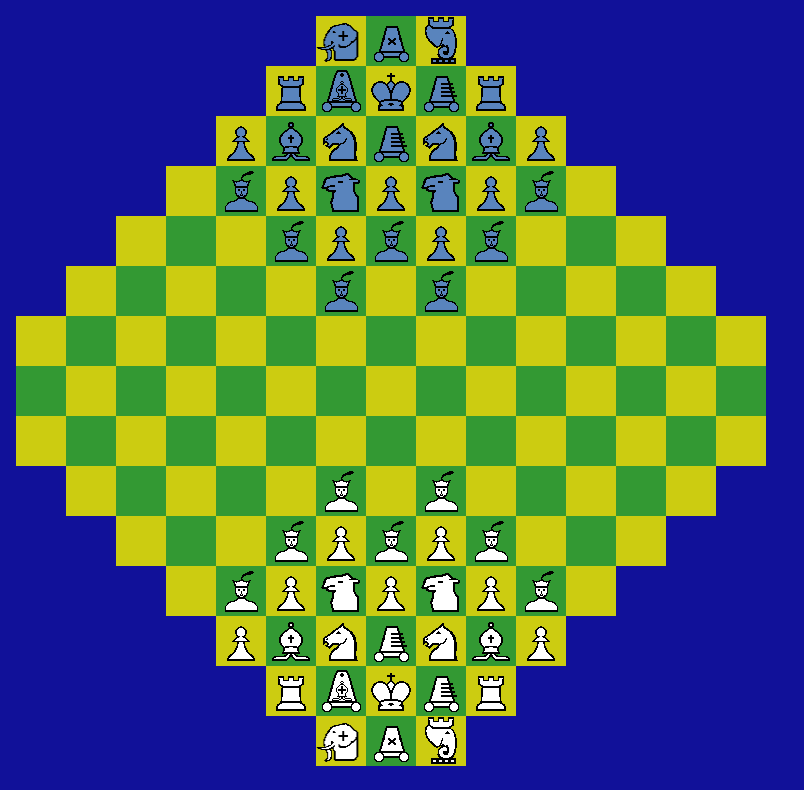 Pieces fall into three groups. The three short-range radial pieces have special properties. Of the rest some are bound to the 64 squares of the original board while the rest are unbound. Any intermediate cell that cannot be stopped on can be leaped over. Thus a Dabbarider moving four squares can leap over pieces on any intermediate square except the middle one, but a Rook doing so cannot leap over any. This is required to prevent bound pieces being affected by pieces outside their binding.

There is no initial double-step move, En Passant, Castling, or Cathedralling, as Mongolian Chess has none of these.

An Esquire reaching a symmetric enemy piece's starting cell or an edge diagonal must be promoted. It can be promoted to any bound piece except a Fezbaba. It can also be promoted to a Waffle if the player no longer has a Waffle. The latter promotion reactivates the player's unbound pieces.

Check, Checkmate, and Stalemate are as in FIDE Chess. The bar on a player exposing their King to Check includes through their Fezbaba or Waffle disappearing by double capture. They can of course expose the enemy King to Check by this means.

This variant can be played with two FIDE sets distinguishable by size. I suggest large King/Bishop/Rook/Pawn for themselves, large Queen for Infanta, small King for Fezhaba, small Queen for Inquisitor, small Bishop for Dabbarider, small Knight for Camel, small Rook for Waffle, inverted small Rook for ninth Pawn, small Pawns for Esquires. It could be played on a big enough standard board, using the relevant vertices, but a specially made board might be easier to use.