The interactive diagram works, however the images for the pieces don't load for me.

I checked the browser console and it says that the images will not load if a website uses HTTPS and the images are hosted on a third party website that uses HTTP-only:

No More Mixed Messages About HTTPS

Thank you. With the help of this diagram and that comment, your text is clear.

EDIT: I had posted a question about piece values, but I now noticed you already address this at the end.

What I try to describe is that  'protected' here means 'pseudo-legally protected'. Capture with a pinned piece is not the only case of that; you could capture with a King. So even in the situation below We5xe7 would not be allowed, because We7 is protected by its King. (And never mind that after 1. Wxe7 Kxe7 it would be checked by a Rook.) So what the sentence tries to convey is that after playing WxW you should be able to replace your Warlock by your King, and having his King on e7 would not be allowed for white, no matter whether he is backed up by Re2 or not. 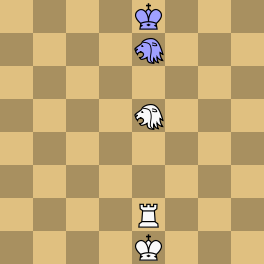 This is similar to Chu-Shogi, where it is of course perfectly legal to expose your King to check under any circumstances, so also when using it to recapture a Lion. It might not be entirely logical in the context of Chess, but I wanted to keep the rule simple. (And Chess players would consider it a very unnatural rule no matter what...) Perhaps I should change the 'not even...' phrase by "not even when such a recapture would expose the King to check (e.g. because you recaptured it with a piece that was pinned on your King).", and omit the second sentence one.

I don't understand this sentence: A Warlock can only capture another Warlock if it would have been safe for a King to end up where the Warlock did. (The "did" here confuses me)

Does that simply mean that a Warlock cannot capture the opponent's Warlock if it could be captured on the next turn?

If yes, shall I understand that this sentence is only repeating the previous one: "When the Warlock captures the opponent Warlock, it becomes 'royal' for one turn, which means it must not be exposed to capture, not even to capture by a piece pinned on the King. "

I'm not sure if the 2nd sentence means something additional or not.

you cannot chase away werewolf with weaker piece, opponent can just defend and keep the werewolf

Well, if you chase it away with a Pawn, the opponent would lose the piece he defends with for a Pawn, even though he keeps his Werewolf. So it is not that easy. But it indeed upsets the usual assumptions on tactics; there is no penalty on using the most valuable piece first.

I know your werewolf chess variant. You are right that contageon antitrading rule also feels unnatural (you cannot chase away werewolf with weaker piece, opponent can just defend and keep the werewolf).

An anti-trading rule of this type is necessary to keep the variant Chu-Shogi-like. I admit that for a Chess player these rules are annoying and seem unnatural (like the ban on perpetual checking in Xiangqi). But they are pretty much a defining characteristic of Chu Shogi, and dropping them would completely change the character of the game. I already did simplify them a bit (dropping the exception for adjacent Lions, which would be taken by igui anyway, and dropping the double-capture exception.)

The problem is that the more effective such rules are in preventing trading, the more annoying they will be in the eyes of a player with a Chess background, as it is really the impossibility to disarm the attack by trading that causes the annoyance. I guess the trading problem with pieces like the Lion is much more severe than with the Queen in orthodox Chess (which also dominates the game value-wise) because he Lion is a short-range piece. Queens act from a distance, and tend to exert their tactical threats from behind the front line, to administer the final blow in a longer tactical exchange. Lions have to jump into the melee, and are so powerful that the only defense against them often is another Lion. So they seek each other, where Queens can easily avoid direct contact.

Of course different anti-trading rules are conceivable, but this probably would not solve the annoyance with them, and would just move the game farther away from Chu Shogi for no good reason. And Chu Shogi is a very well evolved game; one can assume they adopted the rule that works best. E.g. one could forbid Lions to capture each other unconditionally, but it would probably make the attacking Lion too powerful, and would not solve the problem of indirect trading. It would be possible to invert the rules: outlaw recapture of a Lion after Lion x Lion, and outlaw other x Lion when a counterstrike against your own Lion is possible. This might favor a defending Lion too much, though.

In Werewolf Chess I used 'contageon' as a means to discourage trading. This feels somewhat less unnatural / arbitrary (to me, at least). But it completely upsets how tactical exchanges work, which can also be perceived as annoying.

Anyway, the goal of this game was to transplant the 'Chu-Shogi feeling' to a smaller/faster and more Chess-like variant, and the anti-trading rules are an essenial part of that. People that are put off by those rules also would not like Chu Shogi, and they are not the audience I target with this variant.

Interesting idea, its a great translation of the lion to "western-like" chess. The piece additions work great to limit the power of the lion a bit, and feel natural. Unfortunately the anti-trading rule is more frustrating than fun. I understand that the Lion is the main attraction in this variant, and that given its power its very likely to be traded, but antitrading rules just feel wrong. Perhaps making lion weaker, while keeping the main draw (moving twice) would be better.

Great. I posted it along with the preset for Elven Chess and I look forward to playing both and to seeing what future variants you come up with too!

This discussion, about contracting the FIDE board, helped me recall this morning Ingo Althofer's En Passant Chess which although merely gimmick-y is also fun and I've played it a little. Because it *is* gimmicky, it might not have much depth and might very well give White a forced win which we could discover, as you suggest. The consequence of contracting the board allows the En Passant rule to really come into its own. Most established dogma about what makes cvs playable is entirely arbitrary and can be thrown out the window with a little rule adjustment, I've found...the familiar shouldn't be confused with the truth.

I probably should have emailed you before I posted this. I apologize if so.

Perhaps it wouldn't give any extra advantage to White. Perhaps you're somehow right and it would give White some sort of advantage - that would be interesting. Demonstrate.

Yes of course I assumed the shogi pawns would only move one step at a time.

By giving it nine ranks, we give it the same number of ranks as in a 9 x 9 Shogi game where three lines separate the pawns. There's at least a bit of reason to my madness here...

If, on the other hand, you have four ranks between the pawns then it creates a certain asymmetry in pawn domination of ranks where the second player can not always directly meet the opponent's pawn on its fourth rank. In 9 x 9 Shogi, there is a middle rank that neither side can easily foray into....

Well, it's just a suggestion. I'm sure the 10 x 10 version of Elven Shogi would play out just fine and if that's the one to go with as standard, you're the boss in the matter and I defer to your judgment.

Reviewing the wikipedia Shogi Variants, I see no 10 x 9 Shogi version (and I can't think of any chess variant that is such a shape either but I don't think this apparent absence means that such a shape is inferior in any way to just about any other shape) so you may be right that my suggestion is unique. I do see a contemporary 10 x 10, like yours - Okisaki Shogi but can't easily locate the rules for it and can't see any but the vaguest notion of a setup. Some places they say it has ten pawns and others 11. Apparently, Okisaki means queen and this variant is a western hybrid that, like yours, implements a queen. Yours looks more interesting though.

For the Elven Shogi variant, might one take out one rank so that the board has 10 rows and 9 ranks? Like so.