Rules of Chess: Kings and check

This webpage gives the answers to some frequently asked questions about the official rules of chess regarding kings and check. For the full rules of chess, see another webpage.

Can you tell me if there is such a rule as king's facing in chess (where both kings are in line with each other)? Is this illegal?

Kings may face each other. See the diagram for the previous question for an example of this. What is not allowed for kings is to be at adjacent positions (see above): moving a king next to another king means to move the king into check, but it is perfectly legal for kings to be on the same rank or file with no pieces between them.

Confusion may have arisen from a rule of Xiangqi - Chinese Chess. In that game, there is indeed a rule that forbids kings from facing each other on the same file with nothing in between them.

I've been playing a particular opponent who believes that there is promotion available if you manage to get your king to the other side of the board. Is this a valid rule?

No. This is not a valid rule. There is only promotion when a pawn reaches the other side.

Can kings take the pieces of the opponent?

Yes. Of course, kings may only move to squares where they are not in check; this means that a king is allowed to take a piece of the opponent that is a king move away and not defended by the opponent.

Can kings move next to kings?

No. Kings cannot move to a square that is adjacent to the other king. So, if it is whites turn in the diagram below, white is stalemated as neither his king and his pawn can make a legal move, and the game ends with a draw. 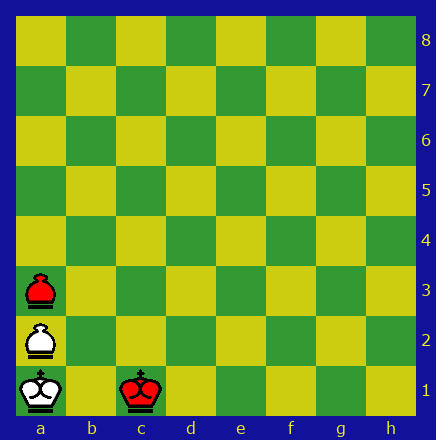 The reason kings cannot move next to other kings is that this would mean that the moving king moves itself into a position where it is attacked.

Can the king move when he is not in check?

Yes, kings are also allowed to move when they are not in check.

The only thing one should be careful about is that the king does not move in such a way that he is in check after the move (such a move is illegal and should be replaced by another move.) In fact, in endgames, kings will often play an important active role.

Are kings allowed to take their own pieces?

I have a computer chess game - Chess Magician 3.0. It allows my king to take any of my own pieces whenever it wants, is this legal?

No, this is not legal. In chess, one is never allowed to take one's own pieces.