This page is written by the game's inventor, Amy Johnson.

The RF is a coward, a mercenary and an assassin who attacks both sides. This version of chess offers a lot more dynamics than the traditional game, modified openings, and some potentially very complex strategy when two moves at once are possible and sometimes unavoidable. Even the larger board is interesting, making the game less of a battle and more of a prolonged War. A semi autonomous piece that is neither black nor white requires very complex and often subtle strategies, a whole new dimension to the game. It can be a bit like billiards, with the crazy knight careening about sometimes in a manner hard to predict from a quick analysis of the board. 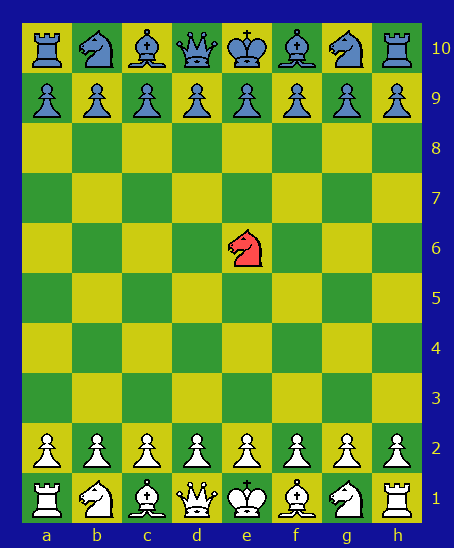 The board has two extra rows. The Red Fool begins on e6, to avoid too much advantage to white.

The only non standard piece is the Red Fool, which moves like a knight with the restrictions below.

The RF can only move if threatened. It has a limited choice of moves: it will always move to a safe (empty or undefended) square if it can. Player whose turn it is can choose from multiple safe squares. With no safe move, the RF will always attack the lowest value piece first. Player whose move it is decides from multiple lowest equal value piece attacks. The RF can attack either side, and you can lose your own pieces from it on your own move. The RF can not attack a piece that is protected. If the RF has no move, it does not move. It can not be removed from the board.

A rare checkmate by the RF itself is a draw game.