My variant Courier Kamil takes the Courier feature of adding to the traditional Rook and Ferz the corresponding pieces in each other's directions, and also applies it to the Elephant and Knight. Here is a variant extending the families of pieces to 3 dimensions in a similar pattern.

As the non-coprime radial leapers are so weak I decided to make all kinds of piece compounds, in the radial cases the Royal, Ducal, and Baronial pairs of direction types. I decided to have these radiating horizontally, vertically, and diagonally from the centre of the back rank. As the potential number of piece types would leave a back rank of an 8x8 square sparsely filled, and 7x7 would undermine the symmetry for the radial leapers, I settled on the 6x6x6 board of Unionschach, Sachsenschach, and Leapale. As the linepieces are the same as those of the Leapale array illustrated, with leapers surrounding them "beyond the pale", Leapale was the obvious name to attach to Courier to name this new variant. Combining two seven-letter words also gives a fourteen-letter name, the kind best suited to the post-your-own-item address builder! Ranks are numbered 1-6, levels lettered u-z (the first character of the cell), and filestacks - vertical groups of files - lettered a-f (the middle character, before the rank number).

Levels u and z 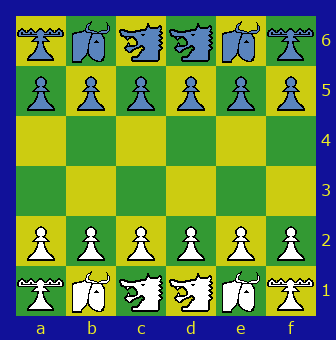 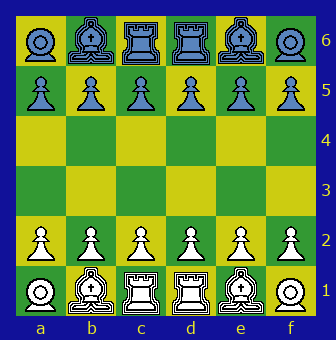 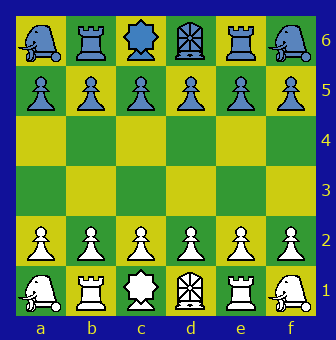 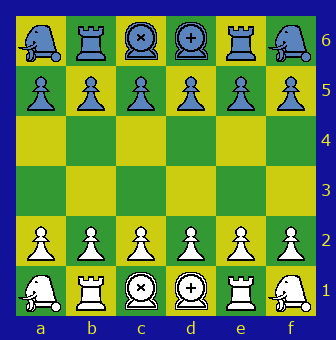 All pieces are unbound except the radial leapers, which are each bound to a quarter of their odd files and whose names my article Man and Beast 06: The Heavy Brigade explains.

The Emperor and three types of promotee-only piece move along any of the 26 radials:

There are no initial double-step moves, En Passant, or Castling.

Stockbrokers reaching the far rank must be promoted. As Pawns in Courier Kamil are promoted not to the simple array pieces but to non-array two-piece compounds, Stockbrokers in Courier Leapale are promoted not to the two-piece-compound array pieces but to three-piece-compound non-array ones - the Archduke, Empress, and Alibuck. As oblique moves do not extrapolate as tidily as radial one, I drop promotion to any oblique piece.

Check, Checkmate, and Stalemate are as normal. A player can also win by a promotion that results in having three Archdukes, three Empresses, and three Alibucks - an incentive not to just boringly always promote to Empress.