This variant adds me to the ranks of those variant inventors who have tackled the idea of the 8x8x8 variant. If your reaction is "God, not another oversized monstrosity" it is quite understandable. I have, however, taken care not to just populate it with simple pieces like the FIDE ones but weakened by the sheer vastness and (because it is 3d) looseness of the board. In fact, all pieces are either compound ones or multipath crooked ones.

On deciding which types to use, I began with the Emperor and 3 kinds of 2-component linepiece. I then threw in all 12 kinds of crowned linepiece. I added knighted pieces as a Cardinal seemed the natural thing to have alongside a Pope. Finally I added crooked pieces alternating between two kinds of move, following the model of Ralph Betza's Rhino pieces. The last group may seem an odd choice, but prove a surprisingly good basis for matching spare representations left over after the straight pieces have been represented.

The name of the variant refers to each army being effective an alliance of subarmies that may be put out of action by the loss of their shortest-range piece.

I have since added another 8x8x8 variant, Gutenschach.

Ranks are numbered 1 to 8, levels lettered s-z, and filestacks - vertical groups of files - lettered a-h. The following table indicates which pieces start on the end ranks - those of the White army on rank 1 and those of the Black on rank 8. 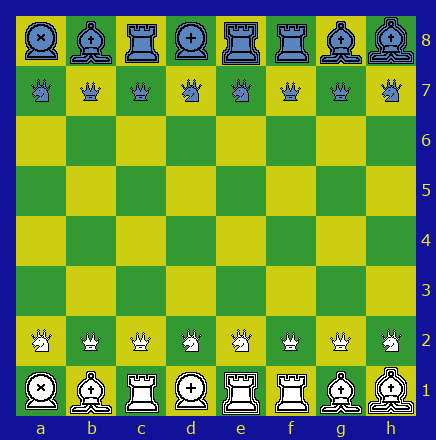 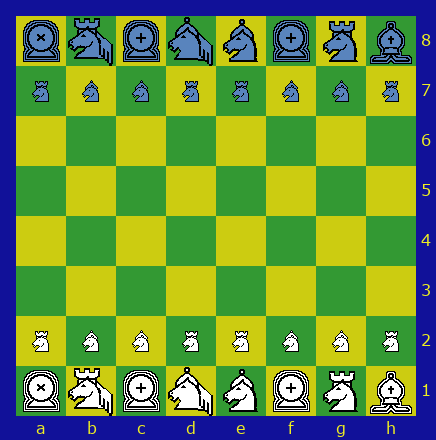 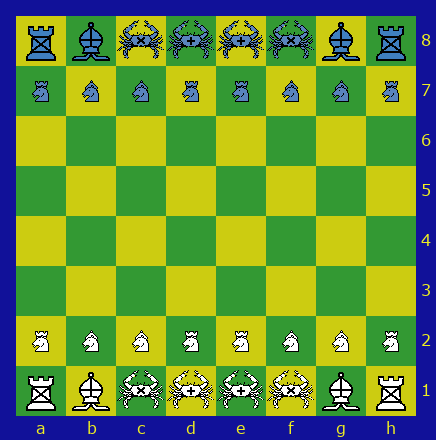 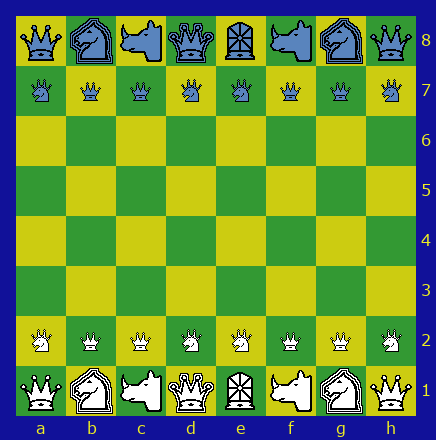 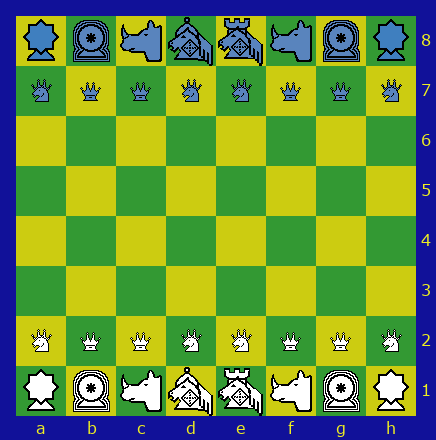 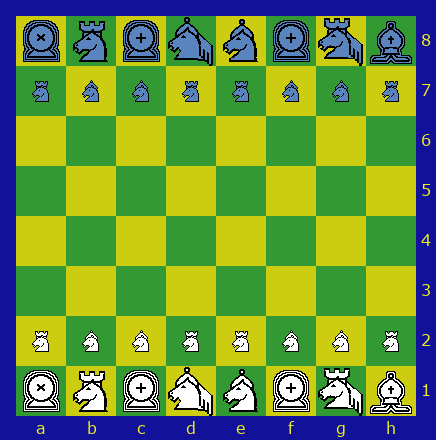 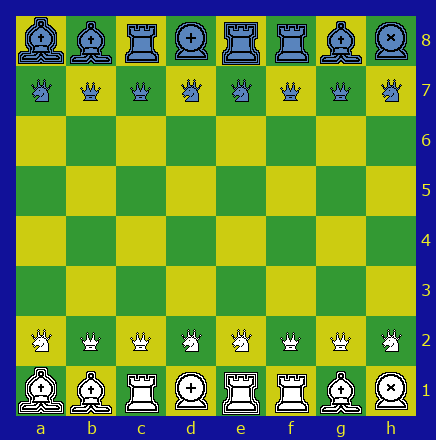 As numbers of piece types echo those of FIDE Chess I recommend using 5 types of FIDE set - 1 each of sets 1 and 2, and 2 each of sets 3-5. They may differ in size, decreasing as set number increases, or be novelty sets, or be marked with a strip of colour - unmarked for set 1, grey for set 2, purple for set 3, orange for set 4, green for set 5.

Single pieces in single sets, 1 aside in total:

Paired pieces in single sets, 2 aside in total:

The Knight moves of all three knighted pieces are unblockable.

Single pieces in paired sets, 2 aside in total:

Play alternates between the two full armies as in FIDE Chess.

Stockbrokers have an optional initial double-step noncapturing move. The two steps need not be in the same direction - and in some cases cannot be - but must be valid noncapturing moves as if each step were a whole move. Immediately after making such a move they may be captured En Passant by an enemy Stockbroker as if it had made only the first step, if such a piece is so placed to do so.

Observe the three same-rank lines of 8 cells through the Emperor's starting cell. You will notice that each has a strong (compound) pure radial linepiece at each end. Next in is the compound of the weaker (simple) complementary pure radial linepiece and the Knight. Next in is a piece alternating the moves of the outer linepiece. Finally in the centre are the royally-restricted piece moving one step along all available radials, and the outer linepiece crowned by single-step moves along the remaining radials. These lines are in fact the analogues to the Rookheavy Chess back rank. In particular they are lines traversable by their own end linepieces. Castling is therefore allowed between the Emperor and either Queen or either Duchess, and Cathedralling (the diagonal analogue of Castling) with either Governor. Distances moved can be extrapolated from FIDE Chess and usual restrictions apply.

Check, Checkmate, and Stalemate are as in FIDE Chess, except that they can be made easier by the pieces being prevented from blocking Check or capturing the Checking piece for the want of a Prince, Duke, or Baron. If that were not help enough - and after all, pieces may be prevented from inflicting Check for the same reason - there is also the option of win by marriage. That is to say, a player wins if they have their Emperor and at least one Empress an Emperor's move apart, with the Emperor not itself in Check.

I decided against having a greater variety of oblique leaps than the Knight's as I wished to limit the number of piece types without giving up the likes of Cardinal and Cavalcade for pieces with clumsier names.

Names for straight pieces (including crowned versions thereof) are fully explained in my piece article Man and Beast 01: Constitutional Characters. Those for Knighted pieces became established before my time on these pages, except Cavalcade (meaning a parade of horses) which I coined in reference to the double dose of horsiness implied by Unicorn+Knight. Navvy and Thug extrapolate from the idea of the Rhino as a less elegant relative of the horse. These last two are listed in Man and Beast 09: Mighty Like a Rose. The Stockbroker is now one of several "Stock" pieces in Man and Beast 15: Strengthened Across the Board.

Do not confuse the Navvy with the Longboyhexer (also in MAB 09), which also moves in a generally Sextonwise direction but by alternating steps of two Bishop moves. All Boyhexer moves are to cells of the same Bishop binding whereas Navvy moves (like Rook and Unicorn moves) alternate between Bishop bindings. The -boy- in the name is of course extrapolated from the 2d Boyscout, which moves generally Rookwise by alternating steps of two Bishop moves.

Note that I have taken care to place the pieces with the most closely related names in close proximty - Baron and Baroness, Cardinal and Pope, Duchess and Duke, and Prince and Queen.

The suggested markings in purple/orange/green are different combinations of red for Rookwise, blue for Bishopwise, and yellow for "yunicornwise" (as it is pronounced).

Set 5 could theoretically be Shogi pieces if you run out of distinctive FIDE sets, as their pieces are certainly comparitively small. As Shogi sets have fewer Rooks and Bishops, though, and no Queens or Knights, different substitutions would be needed. It can even be done entirely with promotable Shogi pieces so, if you have a good enough eye for Japanese characters but the will to ignore the usual meanings, you could even use them unpromoted for set 5 and promoted set 4!