This page is written by the game's inventor, Andrew L Smith.

This is a 'small boards' variant of Dragonchess where all pieces (though not all pawns) can reach any of the three boards. Like Dragonchess, most of the pieces have different abilities depending on which board they are on, with pieces generally being at their most powerful on their home boards.

I was initially trying to make an 8x8x8 variant, but triagonal riders only being able to reach 1/4 of the squares while also being infuriatingly good at slipping past pawn walls in the opening was something I found to be un-fun. By making the board not a cube, I could get away with letting pieces use triagonals without these problems.

Three Realms Chess is played on 3 standard chessboards: the Earth, the heavens and the underworld. The heavens use the standard file labels (a-h), the Earth uses the 8 letters in the middle of the alphabet (j-q) to label its files, while the underworld uses the last 8 letters of the alphabet (s-z) to label its files.The letters i and r are not used as file names.

Here is the setup for the heavens. Note that the colours are inverted. 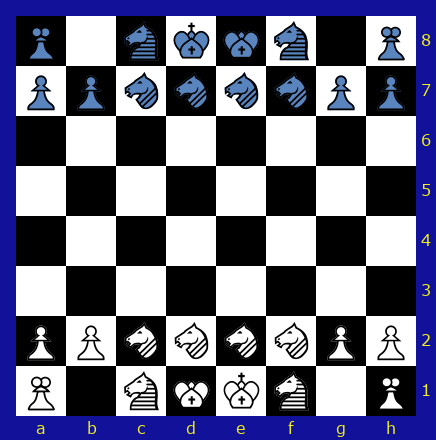 This is the setup for the Earth. It may look familiar to some players. 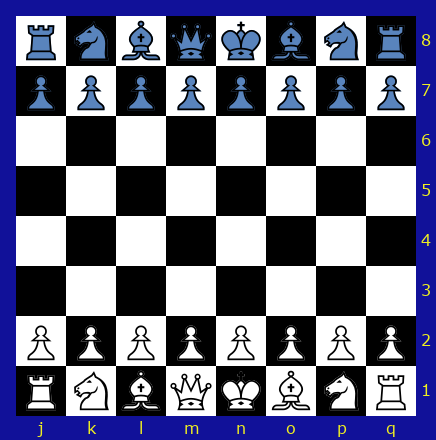 This is the setup for the underworld. 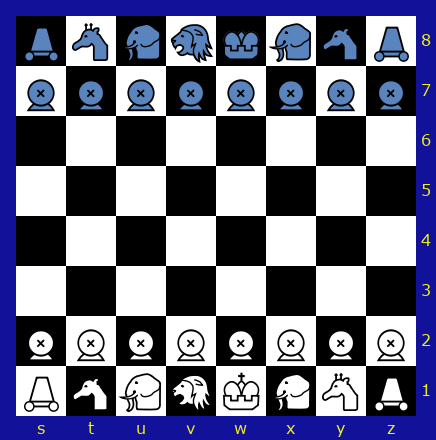 Pawn: Passively moves one space orthogonally forwards, captures diagonally forwards. A pawn on n4 can move to n5, or capture on m5, o5, e5 or w5. Upon reaching the opponent's back rank, pawns promote to Grandmasters. The pawns' movement does not change between realms. Pawns may also make an initial double step and get captured en passant as in FIDE chess.

Rook: Moves any distance orthogonally, including up or down. The rook's movement does not change between realms.

Bishop: On Earth and in the heavens, the bishop may move any distance diagonally. However, in the underworld, a bishop can only move one space triagonally. A bishop that enters the underworld must change the colour of square it's on on the way out.

Grandmaster: Moves any distance orthogonally, diagonally or triagonally regardless of which realm it's in. There are no grandmasters in the initial starting position; the only way to get one is by promoting a pawn.

Silver General: Moves one space diagonally, or one space orthogonally or triagonally forwards. Its movement does not change between realms.

Warmachine: When in the underworld, moves any distance orthogonally like a Rook. When on Earth or in the heavens, it moves up to 2 spaces orthogonally, leaping over any piece in its way.

Scholar: Moves any distance triagonally, leaping over any piece in its way, or makes a (2,2,1) leap. The scholar must change which realm it is in every time it moves, though its movement does not change between realms.

Elephant: When in the underworld, moves any distance diagonally like a Bishop on Earth. When on Earth or in the heavens, it moves up to 2 spaces diagonally, leaping over any piece in its way. The elephant is the only colourbound piece.

Fallen Angel: Has the same movement capabilities as the last piece the opponent moved. If the opponent's last move was a promotion, the angel imitates the newly promoted piece. A fallen angel may sometimes try to imitate a piece with no movement options (a pawn, imp or honorable horse on the 8th rank, an honorable horse on the 7th rank, in imp in the heavens, or an angel that has just fallen). If this happens, the fallen angel cannot move. Fallen angels cannot be involved in castling, even if they imitate a King or Rook. Fallen angels cannot make an intial pawn double step, even if they are on the 2nd rank. Fallen angels do promote if they reach the back rank while imitating a pawn, imp or honorable horse.

Fiend: Moves up to 2 spaces orthogonally, diagonally or triagonally, leaping over any pieces in its way. Its movement does not change between realms.

The rules of FIDE chess are used with the following exceptions:

If a player touches one of their Rooks with the intention of castling and castling is a legal move, they may castle by capturing their own king (ignoring Article 3.1) then moving both pieces to their appropriate squares. This rule change isn't necessary for this variant, I just don't like how FIDE disallows castling as a rook move.

Note that rule 3.9.2 (don't put yourself in check) forbids moving any piece that will give the fallen angel the ability to attack the king. As a fallen angel's movement capabilites are determined on its opponent's turn, a fallen angel cannot deliver check.

A bare king on Earth can deliver checkmate against a king not on Earth by moving triagonally adjacent to the enemy king then bullying it into the corner.

The pieces in the central 4 files in the heavens develop very quickly, so control of the heavens is important in the early game. On the other hand, the underowld pieces are slower to develop but have powerful 2-space leaps, making them stronger in the endgame.